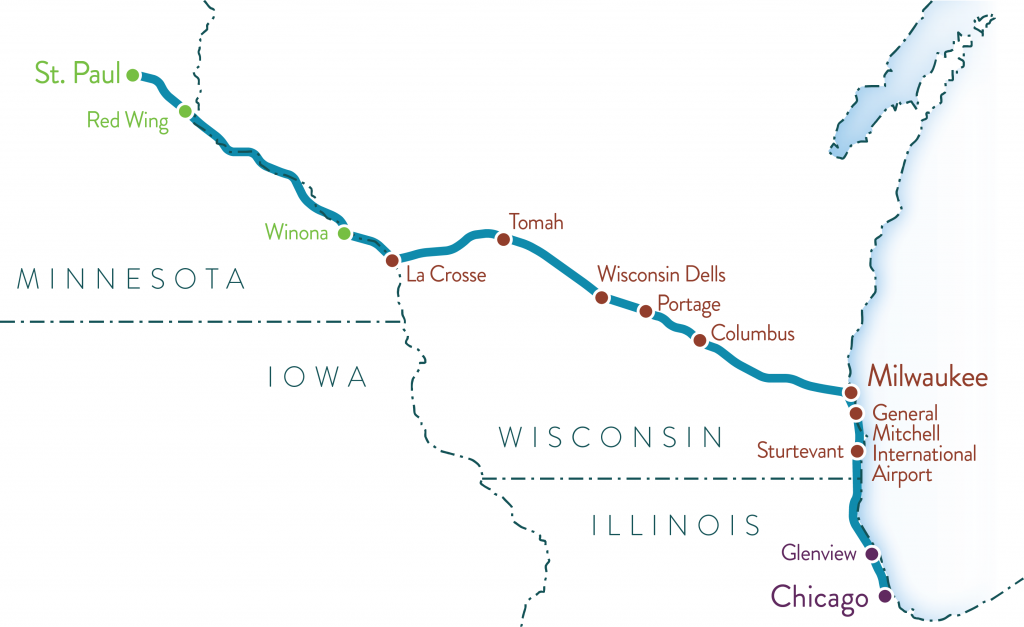 A second daily train could be in service between the Twin Cities, Milwaukee and Chicago by 2024, if not sooner.

The new service would be a boon for Milwaukee travelers. The only current departure on the Amtrak Empire Builder is at 3:52 p.m. Eastbound passengers must currently leave St. Paul at 8:00 a.m.

A new eastbound train would leave St. Paul at 11:47 a.m. and arrive in Milwaukee at 5:40 p.m., becoming the southbound Hiawatha that arrives in Chicago at 7:14 p.m. The westbound TCMC would leave Milwaukee at 12:39 p.m. The setup is similar to one envisioned in the $810 million Hiawatha expansion rejected by then-Governor-elect Scott Walker in 2010.

“This vital rail project came together because the federal government not only recognized its importance to the region, but the extraordinary collaboration among states, local economic groups and freight and passenger rail,” said WisDOT Secretary Craig Thompson in a press release.

Approximately 124,000 people are expected to ride the TCMC in its first year.

Get a daily rundown of the top stories on Urban Milwaukee
The Empire Builder currently provides service between Chicago and either Seattle or Portland, but east-bound trains are frequently delayed before arriving in St. Paul and the once-a-day departures limit the desirability of the service. The TCMC plan calls for a second train that doesn’t go west of St. Paul, reducing delays and providing enhanced connectivity between the communities along the route.

A series of railroad infrastructure improvements are planned as part of the project. They include improvements to a rail yard and the addition of a second mainline track in La Crosse, upgrades to the track in La Crescent, MN that leads to a bridge over the Mississippi River, upgrades to a yard in La Crescent to create a second mainline track, siding improvements in Winona, MN and improving Midway Station in St. Paul. The station, which was replaced by the restored Union Depot, would be reconfigured to serve as a crew base and used to prepare the trainset for a return trip. Approximately 77% of the infrastructure costs are projects in Minnesota.

The improvements were negotiated with Canadian Pacific, which owns the 411-mile corridor. The freight railroad will see improvements to its operations as a result of the work. The improvements are expected to generate $34.7 million in freight cost savings over the next 30 years, according to the Wisconsin and Minnesota’s transportation agencies.

A match is required to access the $31.8 million Consolidated Rail Infrastructure and Safety Improvements (CRISI) grant. Minnesota is to provide $10 million, Wisconsin is to provide $6.5 million and $5 million would come from Amtrak.

The federal grant was first announced in 2020, but WisDOT passenger rail manager Arun Rao told Urban Milwaukee that the partners needed to finalize negotiations with Canadian Pacific and Amtrak, secure environmental clearance for the project and complete a preliminary design plan before signing the agreement with the Federal Railroad Administration (FRA). Rao said the agreement was signed this week.

“Through the leadership of [FRA Administrator Amit] Bose, strong partnerships with state and local leaders in Wisconsin and Minnesota, and our productive relationship with Canadian Pacific, we are moving the addition of Amtrak service between the Twin Cities, Milwaukee and Chicago to the forefront of our growth efforts,” said Amtrak President and CEO Stephen Gardner. “While we cannot announce a TCMC start date – yet – know all of us working together can make this happen in months instead of years.”

Both Rao and the WisDOT release suggested that the service could start before 2024. Construction, after final design work is completed, is scheduled to begin in 2023.

The train currently takes approximately six hours in each direction between Milwaukee and St. Paul.

The TCMC would cost $12.29 million annually to operate. A project plan estimates approximately $5 million annually in train revenue (primarily ticket sales), with the remainder to be covered by the states. The federal government awarded a $12.6 million grant to cover startup costs in the first three years. The existing Amtrak Empire Builder is funded entirely by Amtrak and would continue to be.

The TCMC would rely on Amtrak equipment, but that will be new equipment in the coming years. Amtrak is replacing its aging Amfleet coaches currently in use on the Hiawatha and other routes with new coaches, the first of which went into service in Illinois last month. The bi-level Superliner coaches in use on the Empire Builder are also being rehabilitated.

Approximately 60% of residents in Minnesota and Wisconsin live within 30 miles of a proposed stop or 15 miles of a shuttle bus stop (Madison, Eau Claire and Rochester, MN).

Wisconsin has been working on expanding the Hiawatha from seven to 10 daily round-trips as part of a $195 million project. WisDOT received a $26.6 million federal grant to pay for a freight yard bypass in the Menomonee Valley in March 2020, $2.7 million to fund a signalization project to speed up trains through downtown Milwaukee in June 2019 and a $5 million award to build a second platform at the Milwaukee Airport Rail Station in March 2019. All three grants required a state match. The Illinois portion of the project remains on hold.

More about the TCMC train