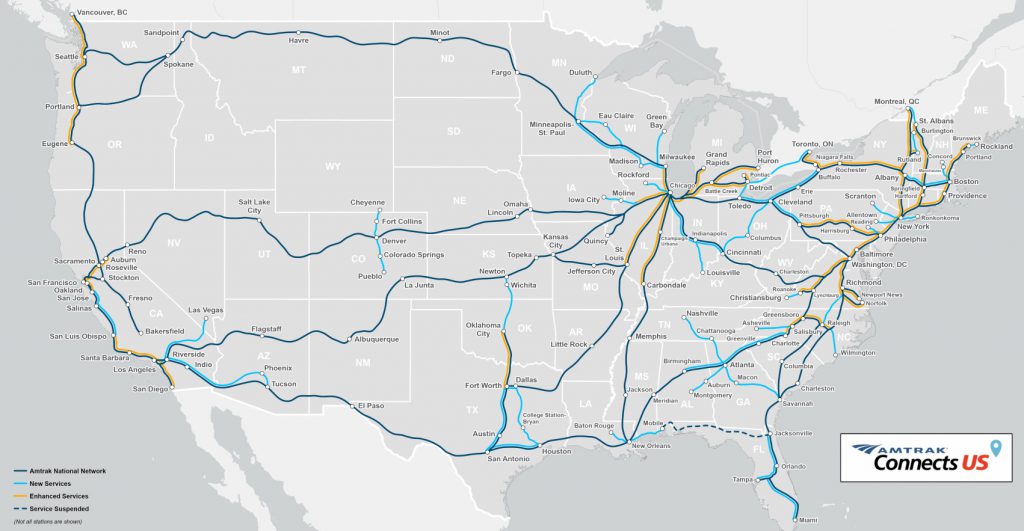 President Joe Biden‘s $2 trillion infrastructure plan, released Wednesday, would set aside $80 billion for Amtrak. And based on a report from the passenger rail provider, the railroad plans to spend plenty of that money in Wisconsin.

“President Biden’s infrastructure plan is what this nation has been waiting for,” said Amtrak CEO Bill Flynn in a statement. “Amtrak must rebuild and improve the Northeast Corridor and our National Network and expand our service to more of America.”

Billed as its 2035 vision, the railroad expects the expanded service would add 20 million rides per year. It includes 30 new routes and increased trips along 20 existing routes, adding service to 160 currently unserved communities, including Nashville, Las Vegas and Phoenix, while expanding existing service in 15 states. Amtrak provided 32 million rides in its 2019 fiscal year.

Details are scant on what specifically is proposed, but one thing is not mentioned. Known as the Amtrak Connects US plan, high-speed rail is not referenced in the press release nor an associated fact sheet. The concept became a hot-button, political issue following an $8 billion allocation in the 2009 stimulus bill. Amtrak currently provides service at up to 150 mph on the electrified, publicly-owned Northeast Corridor which runs from Boston to Washington D.C. Other segments have speeds in excess of the 79 mph speed limit that governs much of the nation’s privately-owned rail system.

Wisconsin was one of the state’s that received a federal grant in the 2009 bill, but Scott Walker used the $810 million award, intended to extend the Hiawatha to Madison, as a wedge issue in his gubernatorial campaign and the federal government rescinded the grant before he took office. The proposal would have paid for costs associated with upgrading the route to allow a maximum speed of up to 110 mph.

The new plan from Amtrak appears to rely on much of that same vision, but without any reference to speed. The central problem is a state-owned rail line west of Watertown that would need many millions of dollars in upgrades. Due to its poor condition at the time of the 2010 grant, the line had a speed limit of 10 mph.

Get a daily rundown of the top stories on Urban Milwaukee
Amtrak currently relies on Canadian Pacific-owned railroad tracks for its two lines in Wisconsin, the Hiawatha and Empire Builder. But a map of the new service to Green Bay, running through Fond du Lac and Oshkosh and Appleton, would require negotiation with Canadian National.

Similarly, the route to the Twin Cities via Madison and Eau Claire would require negotiation with Canadian Pacific and Union Pacific. The map depicts the once-daily Empire Builder, which runs from Chicago to Seattle and Portland, continuing on its current route via Columbus, Portage, Wisconsin Dells, Tomah and La Crosse with the new service adding a second pathway to the Twin Cities.

As has played out with the TCMC train (Twin Cities-Milwaukee-Chicago), the host railroads often demand infrastructure improvements related to moving freight trains out of the way as well as upgrading track conditions. The TCMC line is scheduled to begin service in 2024, effectively making it a second Empire Builder train that operates as an extension of the Hiawatha.

Both the Green Bay and Madison trains, based on past plans, are likely to operate as extensions of the Chicago-to-Milwaukee Hiawatha. That would allow passengers to board a train in the Windy City and get off in many Wisconsin cities without having to change trains in Milwaukee.

A proposal to increase the number of daily roundtrips on the Hiawatha Service, from seven to 10 has resulted in Canadian Pacific and other host railroads requiring projects totaling $195 million be completed to accommodate the traffic. The Wisconsin Department of Transportation has secured a number of federal grants in recent years to support those upgrades, but the State of Illinois sent a key piece of its portion of the work back to the drawing board following suburban Chicago opposition. The states are reportedly working with the railroads on a solution, but a revised project has yet to be introduced.

Wisconsin’s 2030 rail plan calls for service on the Hiawatha to eventually be expanded to 17 daily round trips. Seven of the trips would run to Green Bay, with a travel time of approximately two hours. Development of a 2050 rail plan is underway.

The Hiawatha Service set a new ridership record in 2019 with 876,356 trips, more than double 2003’s total when the system began providing seven daily roundtrips. The route is the busiest non-coastal route in the Amtrak system.

The Hiawatha route between Chicago and Milwaukee, billed as “enhanced services” in Amtrak’s new plan, was to be upgraded to 110-mile-per-hour service under a $150 million plan advanced by Walker to the federal government in 2011. The federal government rejected the plan  after Walker had rejected the earlier $810 million grant. Some of the projects under the $150 million and $810 million plans, including a new train shed at Milwaukee Intermodal Station, a second platform at the airport station and the Muskego Yard bypass, have since been funded through other grants or state allocations.

The plan does not specify if Amtrak or states would need to fund the increased service costs. Hiawatha revenue pays for 75 percent of the service’s cost. The rest of the cost is subsidized, with Wisconsin paying 75 percent and Illinois paying 25 percent of that amount. The Empire Builder is funded as part of Amtrak’s national network. The new TCMC train will require Wisconsin and Minnesota funding.

But before Amtrak can plot where and when to make upgrades, Biden’s American Jobs Plan must pass both the U.S. Senate and House of Representatives.

UPDATE: An earlier version of this story said the Green Bay line would require negotiation with Watco. The lines Watco recently acquired from CN are in the corridor, but not the main line between Milwaukee and Green Bay.