Deadline is one week away and nearly 70% of districts have just one candidate running. 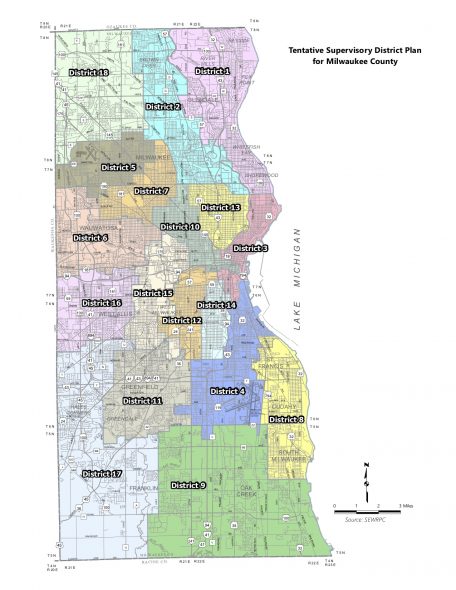 New Legislative Map for Milwaukee County Board of Supervisors.

The deadline to file to run for the Milwaukee County Board of Supervisors is only a week away, and so far, nearly 70% of the candidates are running unopposed.

Of the 18-member board, 12 supervisory districts only have one candidate. The majority of the 12, nine districts, have an incumbent running. The deadline to declare candidacy and submit nomination papers to get on the ballot is 5 p.m. on Jan. 4.

Incumbents running unopposed is not uncommon for the Milwaukee County Board. But this spring’s election is the first time the incumbents will be running under the new maps drawn by the board this fall.

In 2016, the board adopted a new ordinance creating an independent process for redistricting. The first map submitted by the Independent Redistricting Commission (IRC) would have put a number of supervisors into the same district as one or more incumbents. Some supervisors faced a challenger for the first time in years.

The independent process was undermined when supervisors successfully pressured the IRC – composed of six retired judges – to consider incumbency in their mapmaking. One IRC member, Judge Mary Kuhnmuench, said she felt supervisors were trying “to use us to legitimize that which we don’t believe is legitimate.” Another member, Judge James Gramling, said “Incumbency was forced upon us as an issue by the [county board Judiciary, Safety and General Services Committee].”

The IRC submitted two more maps with incumbency baked in. But after incumbency was considered, the measures of racial equity used by the redistricting process became worse with each successive map. The board eventually voted to take over the redistricting process, with many supervisors citing concerns of voter dilution and packing and cracking of minority districts. The Southeastern Wisconsin Regional Planning Commission provided technical map drawing assistance to the board and the IRC. The final map approved by the board greatly improved the redistricting measures of racial equity for the board. Still, incumbency remained a factor in drawing the maps to the very end.

There are also first-time candidates who are in a position to sail into a board seat without a challenger.

Sup. Joe Czarnezki announced in October he would not seek reelection. He would have been an incumbent in District 11 under the new supervisory map. Kathleen Vincent, a member of the Greendale School Board, is currently running unopposed in this district.

Get a daily rundown of the top stories on Urban Milwaukee
Dyango Zerpa is running for District 14 unopposed. He is a legislative aide to Ortiz-Velez at the state capital, where she is a representative in the State Assembly. Sup. Jason Haas is listed as the incumbent for this district, but he announced in October that he would not seek reelection. The new District 14 includes pieces of districts that were formerly in Haas’ district, Clancy’s District 4 and Ortiz-Velez’ District 12. Zerpa initially filed to run for Ortiz-Velez’ district, but had to refile for District 14 after the redistricting process finished.

Steve Taylor, a former supervisor and City of Franklin alderman, is running unopposed for District 17. Taylor previously served on the county board from 2012 to 2016. He has claimed credit for shepherding the controversial development of the Rock Sports Complex and Ballpark Commons in Franklin. He now works as executive director of the ROC Foundation, the nonprofit arm of the company that developed those projects.