After jettisoning their independent process, the board adopted a new map during a marathon meeting Friday night. 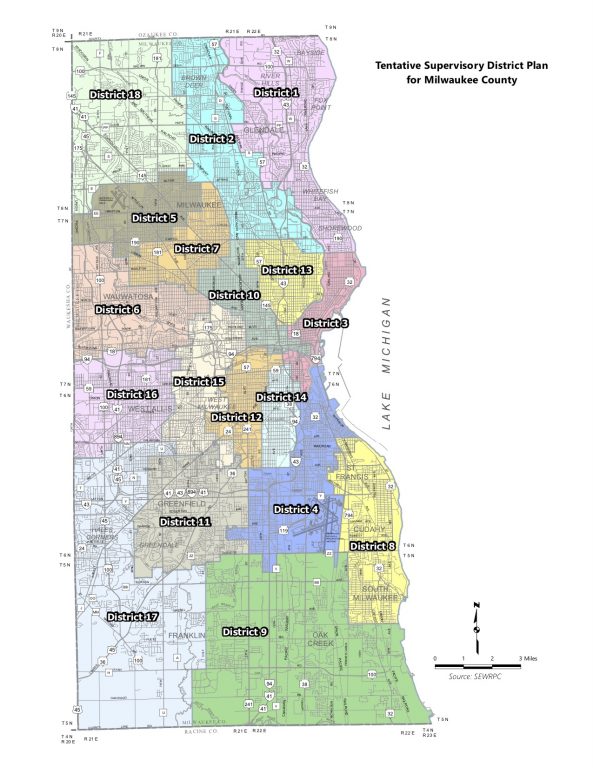 New Legislative Map for Milwaukee County Board of Supervisors.

The Milwaukee County Board adopted a new map of supervisory districts, which candidates to the county board will run on for the next decade.

But the work isn’t over yet. The board still has to transmit that map to municipalities in the county to draw election wards and their own legislative districts. Then the maps have to go back to the county board who holds a final vote of approval on the maps before they can be certified. For this reason, this map is technically considered the board’s “tentative” map.

Jim Owczarski, City of Milwaukee Clerk, told Urban Milwaukee that the county’s largest municipality intends to “have the maps in the County’s hands by the deadline.” He added that, “Obviously the Common Council must make the final decision,” as the city’s maps will need to be approved by the council before they can be returned to the county.

If the county fails to certify maps in time for the spring 2022 election notices, which will be posted on Nov. 23, it will face an “acute risk for litigation”, according to county Corporation Counsel Margaret Daun, as candidates are forced to run on maps from the past decade.

The map approved by the board Friday was created by SEWRPC after the dissolution of the independent redistricting process. That process began in August and involved an Independent Redistricting Committee (IRC) made up of six retired judges.

The board voted on Oct. to reject the third and final map from the IRC, thus bringing the redistricting process under their authority. Though, the independence of the committee was diminished when supervisors forced it to violate its own redistricting principles and consider incumbency.

The primary concern of the IRC was always respect for the Voting Rights Act of 1965. Creating districts that allow racial and ethnic minorities was a concern that carried over into the board’s process, too. Specifically, the board sought to create six districts that had strong Black majorities.

Get a daily rundown of the top stories on Urban Milwaukee
This map, referred to as Map K1, has six majority Black districts, two majority Hispanic districts, nine majority white districts, and one minority influence district. This last district has a white majority of nearly 53%, but a plurality of minority residents make it a district of electoral influence for minority voters.

After this vote was taken, Chairwoman Marcelia Nicholson left the meeting due to a previous commitment, she later returned to the meeting as the board was considering amendments to Map K1.

Map K1 has four majority Black districts where Black residents of voting age make up more than 60% of the population. Map M had five districts with a Black voting age population above 60%. The white majority in the influence district was larger in Map M.

There were seven amendments made to the map. The amendments adopted were named for the supervisors that proposed them and then later in the meeting assigned numbers. Four amendments passed the board.

Map K1 was adopted on a vote of 10 to 7. Supervisors Czarnezki, Johnson, Jr., Logsdon, Rolland, Staskunas, Sequanna Taylor and Weishan, Jr. voted against the map.

Staskunas told his colleagues this amendment was created to change Map K1 so that the City of West Allis was split into no more than two supervisory districts. It did not protect any incumbents, nor did it move them into a district.

This amendment was drawn to put Chairwoman Nicholson in district 10 by herself, Ortiz-Velez told her colleagues. She said Nicholson would have to run, no matter where she is seated. She said she thought the voters should get to decide if they want to re-elect the first Afro-Latina elected as Chair of the county board.

The amendment passed, with Sup. Clancy, Rolland, Staskunas, Taylor, Weishan Jr. and Nicholson voting against it.

Nicholson told her colleagues before the vote that she did not ask for the amendment, nor for her incumbency to be protected.

A later amendment put forward by Johnson Jr. that would have put him into a district similar to the district he is in currently failed to pass, with many of the supervisors that voted to protect Nicholson’s incumbency voting against Johnson’s amendment. Johnson Jr. said the amendment was intended to draw the boundary of District 2 to respect the municipal boundary of the city of Milwaukee.

This amendment creating a district for Nicholson also slightly increased the white majority in the minority-influence district.

This amendment, Staskunas said, was drawn to “square” the boundaries of West Allis, pulling a small section of District 6 down so it is south of Interstate 43.

This amendment was created by Logsdon. She said it was intended to move more Franklin residents into district 17.