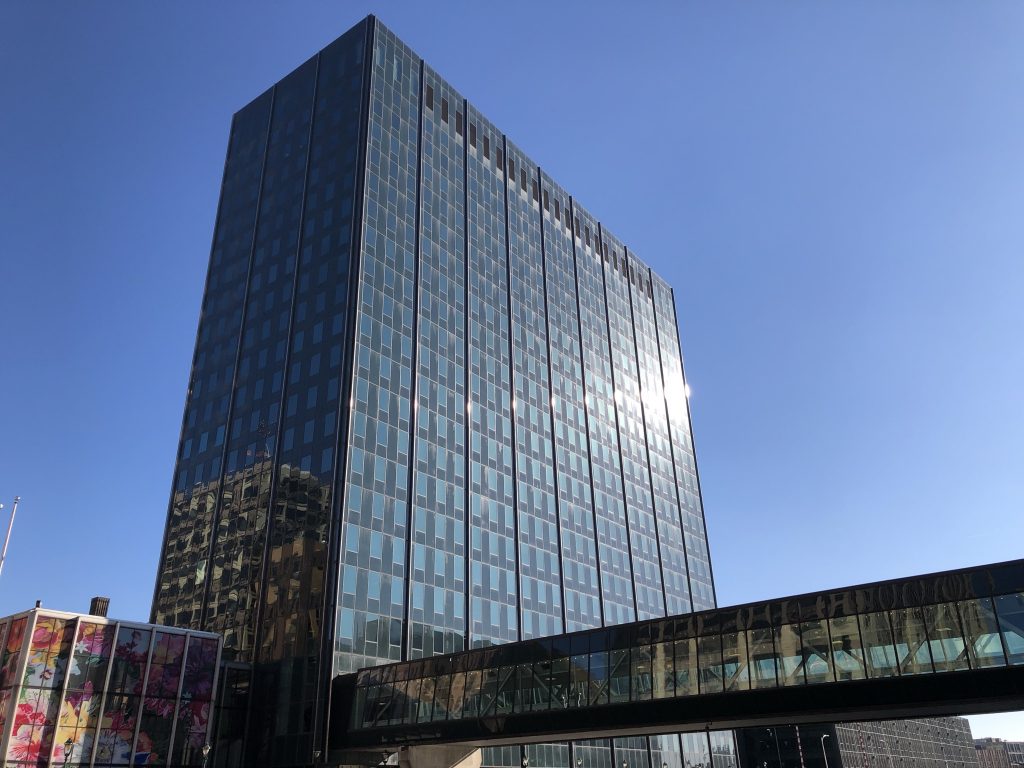 One of downtown Milwaukee’s most prominent office buildings is changing hands.

The 22-story, International-style office tower contains 480,654 square feet of space according to city assessment records. It was built in 1961.

The acquisition, for which a public record does not  appear in the state real estate transfer website, was first reported by Alex Zank. The property is already listed on RMC’s website, with CBRE listed as the property manager and Colliers International as the leasing manager.

It’s the second major acquisition in the Milwaukee market for the New York-based Group RMC. Earlier this year the firm acquired the 330 Kilbourn office complex.

Billed as a real estate co-investment group, the firm invests explicitly in underappreciated office properties. It reports owning more than 20 million square feet of office space, primarily in the nation’s Midwest and Southeast regions. In addition to the downtown buildings, it also owns the Brookfield Lakes office complex in Waukesha County.

Chase Tower is currently 73% leased according to CoStar Group data. Chase Bank is the anchor tenant in the complex.

Get a daily rundown of the top stories on Urban Milwaukee
Farbman acquired the building and a connected 800-stall parking structure, 543 N. Water St., in 2016 for $30.5 million. The two properties are jointly assessed today for $33.96 million.

Known as Marine Plaza when it was completed, the building was the first major building in Milwaukee constructed with glass curtain walls. It was designed by Harrison and Abramovitz Architects.

A restaurant, Top of the Marine, was once located on the top level of the building.

In 2019, the multi-story lobby facing the intersection of N. Water St. and E. Wisconsin Ave. was covered in a diorama of tropical flowers known as “Gild the Lilly (Caribbean Hybrid I, II, III).” The piece by artist Carlos Rolón was originally installed as part of the Sculpture Milwaukee program. Farbman previously extended its installation to 2022.

The developers looking to convert the Humphrey Scottish Rite Masonic Center to apartments have found a home for one of the most unusual items ever to impede a Milwaukee development: stained glass windows.

Saxony Capital, which is seeking to redevelop the building into 22 apartments, wants to remove the windows because they substantially reduce the amount of natural light. The masons, according to the development team, don’t want them. But the Historic Preservation Commission is calling for them to be saved, or even kept elsewhere in the building.

One of downtown Milwaukee’s premier parks is receiving an upgrade.

Construction work, led by JCP Construction, is underway to “Frame the Square” at Cathedral Square Park. A crew installed the first new pavers this week, part of creating an expanded, durable sidewalk intended to beautify the park and support the many events the park hosts.

Cathedral Square fills a full city block, bordered by E. Kilbourn Ave., N. Jackson St., E. Wells St. and N. Jefferson St. Pre-pandemic, the park hosted a weekly music series, Jazz in the Park, the Bastille Days festival and a number of other events throughout the year. The prior configuration resulted in trampled grass, mud and scattered gravel on the park’s edges.

The building that was once home to the Riverwest Public House Cooperative tavern is for sale.

For nearly a decade, the first floor was occupied by the cooperatively-run tavern known as the Public House. The bar was weakened by several years of financial difficulties, and it was finished off in 2020 when the COVID-19 pandemic hit.

Fatima Laster is transforming the Five Points neighborhood one building at a time.

After tackling a former funeral home, she’s set her sights on a fire-damaged mixed-use building. The new, $1.8 million project calls for a restaurant, recording studio, event space and four apartments.

The skywalk between the Hyatt Regency Milwaukee Hotel and the Wisconsin Center was demolished Tuesday as work continues to progress on the $420 million convention center expansion.

Demolition of the skywalk began at 9 a.m. and continued throughout the day.

A new skywalk will be constructed, reconnecting the Hyatt to the Wisconsin Center. The elevation and point of entry will be different than the old skywalk and will also be brighter and more accommodating, said Catherine McCoy, a communications associate for Kane Communications.

On Tuesday, the Zoning, Neighborhoods & Development Committee unanimously recommended zoning changes to enable the structures to be used as residential buildings.

Three B Company, which owns other student housing units near Marquette, would purchase the 11,000-square-foot lot at 1703-1719 W. State St. and construct the houses.

The city listed the property for sale earlier this year, with responses to a request for proposals due September 30.

The Department of City Development didn’t have to go far to find the winning bid. Three B owns a rooming house (953-955 N. 17th St.), marketed as “the mansion,” that borders the property.