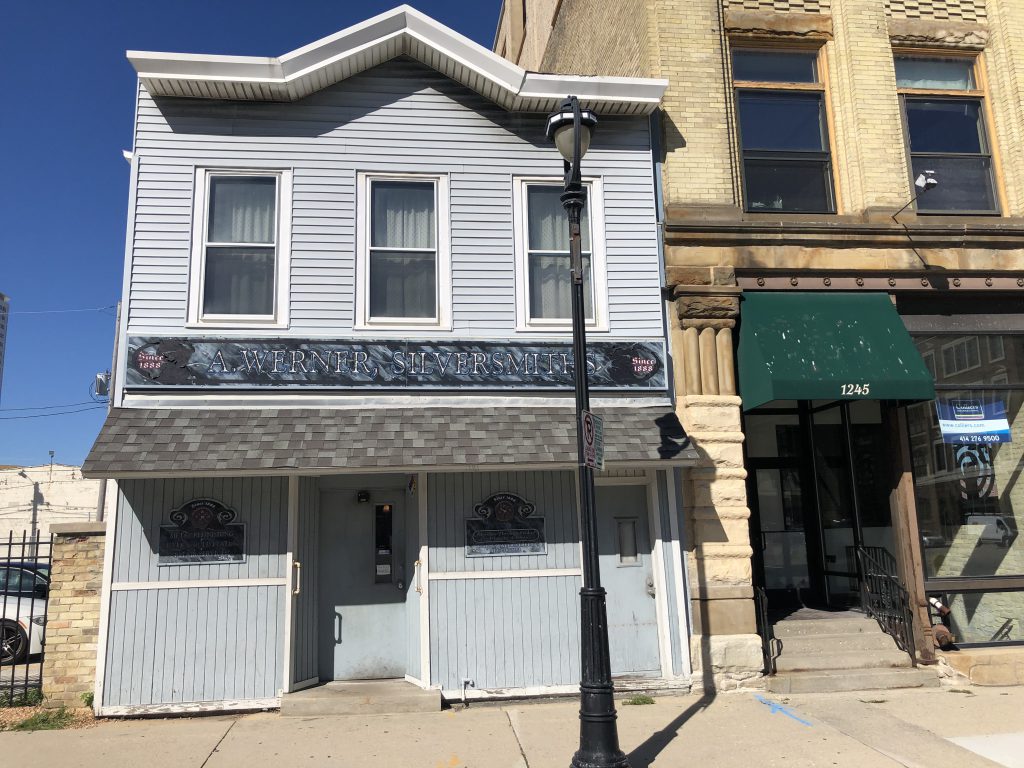 A. Werner Silversmiths is closing, which opens up a new opportunity on N. Water St.

“Milwaukee has changed a lot,” said business owner Michael Wied in a statement to BizTimes, which first reported on the change. “This area used to be nothing but highway overpass (the Park East Freeway). We just stayed here and watched Water Street grow around us.”

Wied’s father Douglas Wied took over the business from Leo Werner in 1954. Werner in turn had previously taken it over from his own father, founder Adolf Werner, in 1940.

The current proprietor, who co-owns the property and business with his brother Dennis Wied, said business has slowed in recent years. The business has been located in the building since the 1950s.

The property, which includes the building and a four-stall of surface parking, is listed for $990,000 through The Barry Company.

The building was constructed in 1895, and, according to city assessments, includes the first-floor commercial space and an apartment above. It has a total of 1,998 square feet of space according to the assessor, but the broker’s listing pegs it at a much larger 3,520 square feet.

A Wisconsin Historical Society report gives the building’s architectural style as “boomtown” but doesn’t have many other details. “No main building permit,” says the report.

The property is located between E. Knapp St. and E. Juneau Ave.

The sun was shining on Milwaukee when the Milwaukee Bucks and North Central Group broke ground on The Trade, a new 205-room hotel.

It was not shining when this photographer went to capture the construction progress.

But work is advancing on the nine-story building. The hotel, flagged as part of Marriott’s Autograph Collection, will include restaurants on the first and ninth floors as well as first-floor commercial space and an 8,700-square-foot event and meeting space on the second floor with outdoor terrace. Select guest rooms will have balconies.

For the first time, there is positive momentum at the Century City business park and no storm clouds on the horizon. A private company could build a new industrial building at the property and lease it out to smaller tenants.

Once home to Tower Automotive and more than 5,000 jobs, the city completed site preparation work on the 84-acre business park in 2014. But the city has struggled to attract permanent employers to the area. The lone bright spot for years has been Talgo, a train manufacturer, and its lease of space in a former Tower facility. A 2019 plan to locate a new meat processing plant for Strauss Brands and create up to 500 jobs in the business park ultimately drew opposition from area alderman Khalif Rainey and died, though the alderman initially supported the deal.

The area, unlike the city’s award-winning Menomonee Valley redevelopment, has been beset by claims that it’s too far from the freeway system or surrounded by impoverished neighborhoods and high levels of crime.

But the partners behind a craft brewery appear to have unlocked the area’s potential.

Construction is underway on the $420 million expansion of the Wisconsin Center, 400 W. Wisconsin Ave.

But at least one person involved thinks calling the convention center project an “expansion” shortchanges its potential impact.

“Let’s not call this an expansion. This is a completion of a vision people had 25 to 30 years ago,” said Wisconsin Department of Administration Secretary Joel Brennan at a ceremonial groundbreaking ceremony Thursday morning.

The new, $17.8 million THIRTEEN31 Place apartment building at 1331 W. National Ave in Walker’s Point is a testament to the overwhelming demand for affordable housing in Milwaukee. All 74 of its affordable units, set aside at below-market rates through the low-income housing tax credit program, are leased two weeks after the building opened.

But THIRTEEN31 is also a testament to the growing network of minority real estate professionals who are moving to address the shortage. Virtually everyone involved in the development is a graduate of LISC Milwaukee‘s Associates of Commerce Real Estate (ACRE) program designed to train women and minorities for a career in real estate.

Many in this case also have a lifelong connection to Milwaukee’s South Side.

The City of Milwaukee has a new shared vision for the future of four near north side neighborhoods.

It is, as one Department of City Development planner put it, a “contract” with the neighborhood for what the future could look like.

And unlike past area plans that focused almost solely on land use, this plan branches into transportation and safety.

School Will Be Redeveloped, But Into What?

A proposal to redevelop a former Catholic elementary school continues to gain support, but its future use is still to be determined.

St. Peter St. Paul Parish and the Archdiocese of Milwaukee have sought to sell the school at 2480 N. Cramer St. for more than four years. The Gothic Revival-style building was constructed in 1912.

A partnership of Matter Development and Galbraith Carnahan Architects, the latter serving as a co-developer and project architect, has stepped up to buy and redevelop the 30,000-square-foot building. The partners are seeking a zoning change to enable a broad range of potential uses for the property.

Bear Development is proceeding with the redevelopment of a large industrial complex in Milwaukee’s Harbor District.

Ryan Companies US, Inc., a national leader in commercial real estate services, today announced that Eric Nordeen has joined the firm as vice president of development to continue the rapid growth of its Milwaukee office. This key addition expands Ryan’s ability to pursue development, construction and build-to-suit opportunities in Milwaukee, Madison, and Southeastern Wisconsin and installs a trusted leader to represent Ryan in local business communities.

“Milwaukee is an important target market for our Great Lakes Region,” said Jim McDonald, regional president. “Eric has cultivated a stellar reputation in the Milwaukee area as a creative real estate developer who is unafraid of a challenge. His expertise across property types and execution strategy aligns perfectly with our business goals for expansion in value-add, re-use and ground-up construction throughout Southeast Wisconsin.”