The Trade hotel will rise nine stories, including 205 rooms. 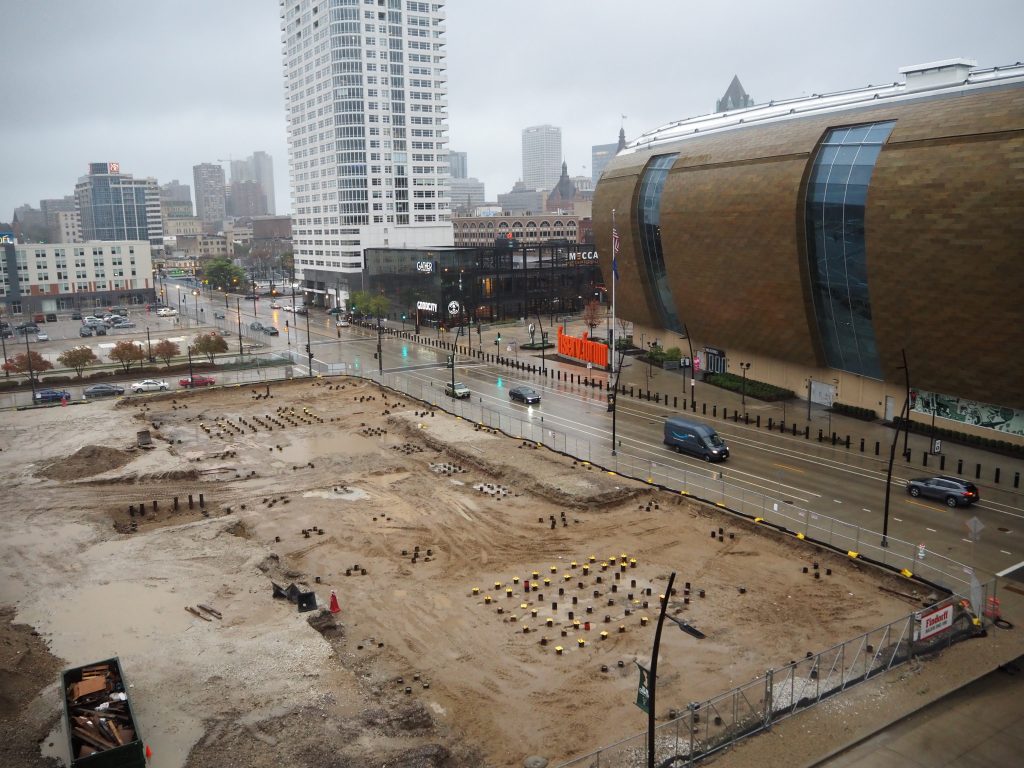 The sun was shining on Milwaukee when the Milwaukee Bucks and North Central Group broke ground on The Trade, a new 205-room hotel.

It was not shining when this photographer went to capture the construction progress.

But work is advancing on the nine-story building. The hotel, flagged as part of Marriott’s Autograph Collection, will include restaurants on the first and ninth floors as well as first-floor commercial space and an 8,700-square-foot event and meeting space on the second floor with outdoor terrace. Select guest rooms will have balconies.

A retail space will be located in the southwest corner of the building and the restaurant, with a facade open to N. Vel R. Phillips Ave. as weather permits, in the southeast corner. The restaurant would also include a mezzanine level. A porte cochère would be in the middle of the first floor, with a lobby set back from the street.

The hotel will occupy the southern portion of a currently vacant lot at 420 W. Juneau Ave. immediately north of Fiserv Forum. A number of piles have been drilled to support the building, presumably carefully placed to avoid hitting the concrete piers leftover from the lots prior use as of an elevated highway.

The site is one of many blocks made available by the 2004 demolition of the Park East Freeway, a fact highlighted by Mayor Tom Barrett at the hotel’s September groundbreaking.

“This is a story about a city divided and now a city weaved together,” said Barrett about demolishing the elevated freeway. He praised former mayor John Norquist for his vision to remove the freeway and the Bucks for the vision to build a neighborhood around the arena. “The story being completed here is about what happens when you have a vision.”

Get a daily rundown of the top stories on Urban Milwaukee
The Bucks’ ownership group was sold a series of county-owned former freeway blocks for $1, in part because a sewer under it needed to be relocated and that the elevated freeway’s removal stopped short of including its subsurface concrete supports. A site plan identifies 12 such structures within the hotel’s footprint.

NCG will lease, not own the property, as part of a long-term agreement. The Bucks will maintain ownership of the site. The hotel is being designed by Gary Brink & Associates and constructed by J.H. Findorff & Son.

The fourth floor is targeted at landing the business of the visiting basketball teams. Unlike the other guest floors, each room in the planning documents submitted to the city is labeled with “NBA” for the room name. It also includes a meeting room. Teams primarily stay at the Pfister Hotel or Kimpton Journeyman Hotel today. The league’s collective bargaining agreement requires teams to find “first-class hotels” for their players with extra-long beds and porters to carry baggage.

Parking for the hotel will be accommodated through the adjacent 5th Street Parking Garage jointly built by the city and team. A future parking structure, built as part of further development of the hotel block, is intended as a long-term parking solution. The north side of the hotel is expected to be largely covered by the garage and a potential office building.

The team selected NCG from a request for proposals process and advanced the project even as the pandemic prevented fans from attending games and canceled events. The partnership was publicly announced in Sept. 2020.

“We moved forward with that Milwaukee grit,” said NCG vice president Andy Inman in September, a reference to the naming inspiration for the hotel. The name is a reference to Milwaukee’s blue collar history, including the coopers, blacksmiths and machinists that once worked on the very site the hotel is being built on, and the city’s formation as a fur trading post.

Madison-based NCG operates approximately 25 hospitality properties, including the Hilton Garden Inn in Brookfield and the Brookfield Conference Center. It operates three hotels adjacent to a stadium complex in suburban Phoenix.

A series of other hotel projects are being planned or were recently completed near the arena. A 155-room Tempo by Hilton Milwaukee is planned for the parking lot at 915 N. Old World Third St. A Hyatt Place extended-stay hotel, not owned by the Bucks, opened in 2018 at 800 W. Juneau Ave. The hotel is located just west of the team’s training facility property. 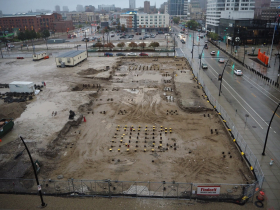 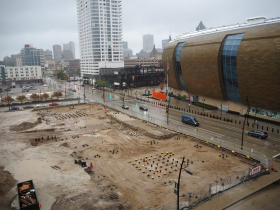 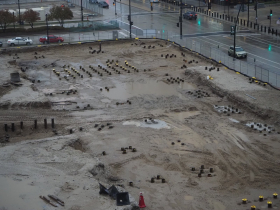 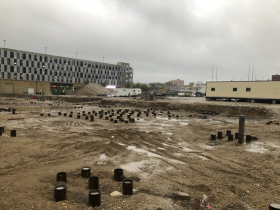 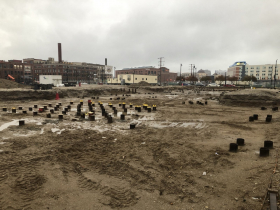 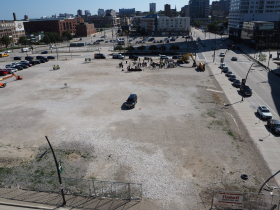 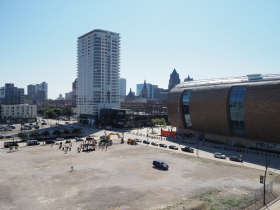 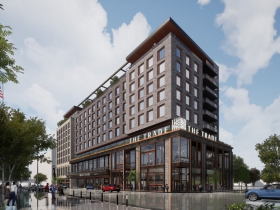 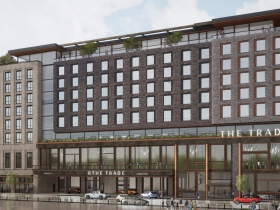 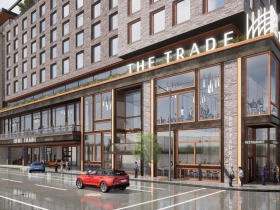