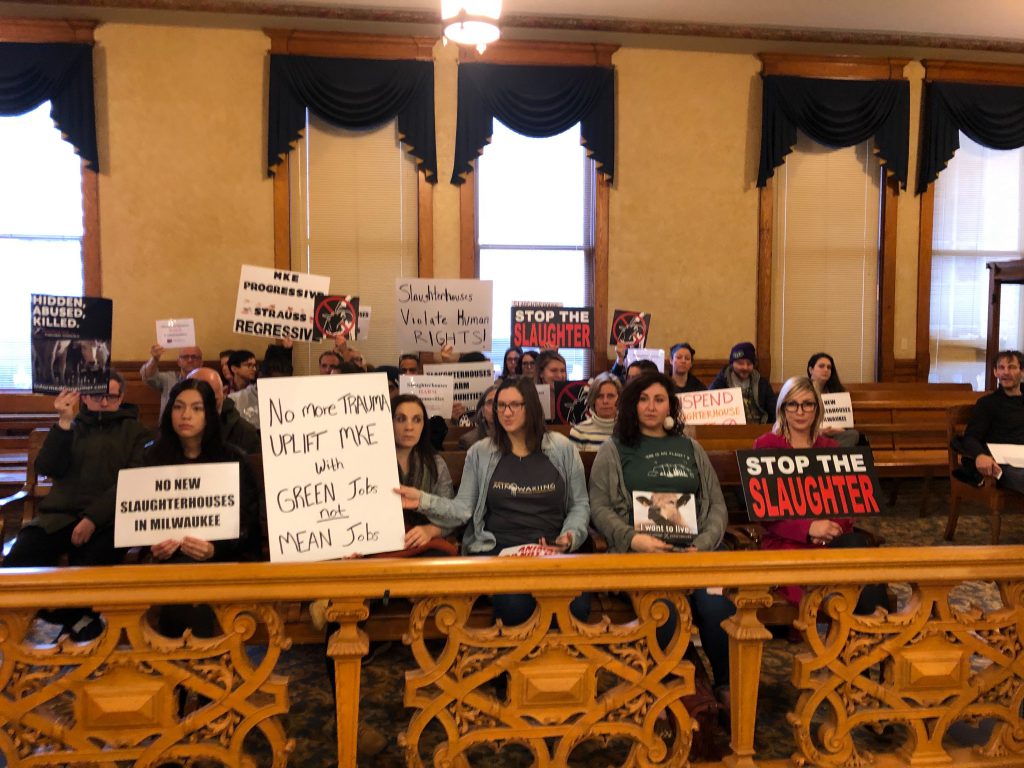 The announcement comes after area Alderman Khalif Rainey, once a vocal champion of the project, came out against the proposed meat processing facility on Friday afternoon.

“It was our hope that Strauss Brands’ move to Milwaukee’s Century City neighborhood would have created jobs, provided an economic boost, and inspired other businesses to follow suit,” said Randy Strauss, the firm’s president and CEO. “We honor and respect the opinions of the community and don’t want to make our home in a place where our presence would not be seen as a benefit. We are no longer pursuing relocation to Century City.”

Rainey, in his statement, said his change came after meeting with constituents that would live near the proposed plant. “In the 72-hour period since the Common Council considered the proposal I have received an overwhelming response from neighbors in opposition to the project,” said Rainey on Friday. On Tuesday, with dozens of opponents to the deal at City Hall, the Common Council unanimously voted to send the proposal back to committee for another hearing.

The city would have sold approximately 20 acres of vacant, city-owned land to Strauss for $1 and provided up to $4.5 million in property tax rebates to the company if it created up to 500 jobs. It proposed to relocate its production facility, derided as a “slaughterhouse,” and headquarters to the former Tower Automotive site at 3025 W. Hopkins St. by 2021 with just under 200 employees and projected to grow to 500 employees in the next 20 years.

During the Tuesday meeting, Rainey, a self-described vegetarian, was still expressing his vocal support for the deal and said neighborhood leaders backed the proposal. “As I look at the gallery, I don’t know any of these people,” said Rainey of the dozens of project opponents holding signs. “None of these people are my neighbors.”

“As I look into the gallery, words stick out such as slaughter, trauma,” said Rainey. But after the alderman ticked off a list of tragic shootings and other violent events in his district, he admonished the protesters for not caring about those incidents. “My inbox is not filled with emails from none of you all.” He said they were placing support for livestock over human lives.

Opponents said the project would cause emotional trauma, in addition to a host of negative impacts, on those working at the plant. But regardless of where the plant ends up in the metropolitan area, Milwaukee residents will likely be working at the facility. Company representatives said at an earlier hearing that over 60 percent of its existing employment base comes from Milwaukee. They said the Century City site was desirable in part because it had easy access to a sizable and willing workforce.

“What we are talking about is job creation,” said Rainey. “At the end of the day this is $14 to $17 an hour. This is 500 jobs in an area that was once known for employing black people in our city. That’s a good, family-paying job.”

“It’s crazy,” Rainey concluded, that all roads lead back to one question – “do black lives matter?”

In his Friday statement, Rainey pledged to remain “diligent and patient” with new development proposals for Century City. He encouraged the administration and his council colleagues to oppose the proposal. With a de facto practice of “aldermanic privilege,” where council members often vote with the local council member’s wishes for a proposal in their district, Rainey’s change of opinion made the deal’s approval unlikely.

The deal was championed by Department of City Development Commissioner Rocky Marcoux. “They do not source their products from feedlots. They are free range. They are grass fed. Their veal is cage free,” said the commissioner on Thursday during a public hearing on a land-use change necessary for the project. “The company leads the industry in humane treatment of animals.”

“I’ve been to the Franklin facility, there is no smell in the air,” said Marcoux. “That’s with the equipment that was older than what will be installed here. This will be state of the art.”

“If we say no to this incredible company, how am I going to market this?” asked Marcoux. He’ll now have to figure that out. Marcoux and others at DCD had championed that Century City had turned a corner with Talgo, Good City Brewing and now Strauss employing people in the development zone, only to see this deal die.

Is there any way DCD and Rainey could have avoided this shocking turnaround on a deal that once looked like an easy win?

Redevelopment Authority of the City of Milwaukee board member Bill Schwartz offered some diplomatic advice during Thursday’s hearing. “Probably in retrospect you should have done more community outreach,” said Schwartz to the DCD representatives.

In its press release, Strauss did not state if it would revive its early 2019 plan to expand to a new site in Franklin. The company, owned by multiple generations of the Strauss family, was sold in August to a Texas-based private equity firm. The company changed its relocation site to Century City after the sale.

The move to Milwaukee was first announced in early September.

4 thoughts on “Eyes on Milwaukee: Strauss Deal is Dead”