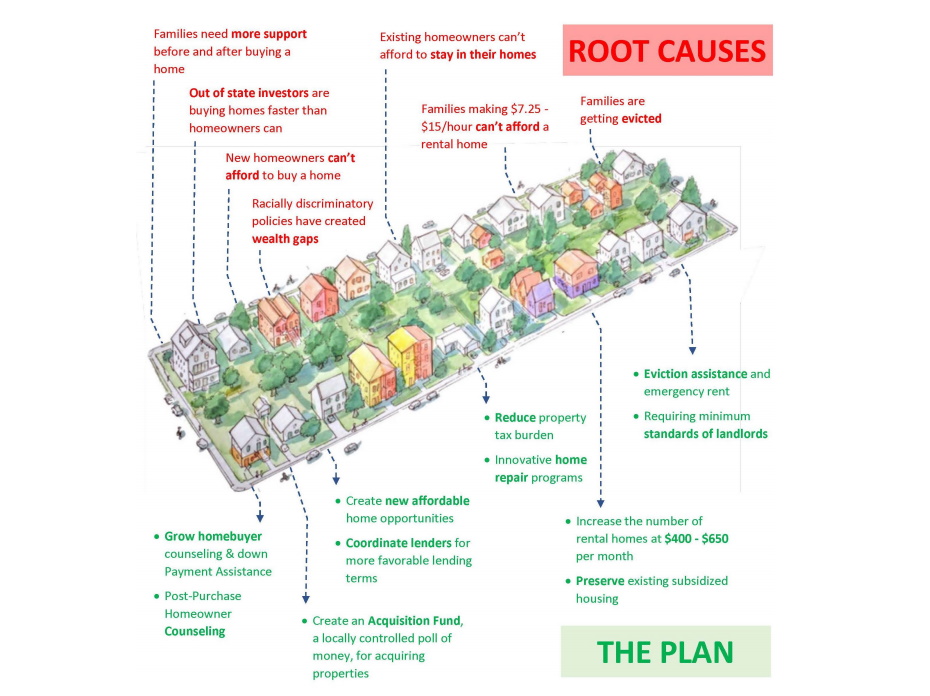 For the first time in its history, Milwaukee has a shared plan to create affordable housing.

The plan, released Tuesday, identifies four key areas for improvement and a series of targeted efforts for each. It’s designed to address both homeownership and rental housing and targeted at those making between $15,080 to $31,200 per year ($7.25 to $15 per hour). The plan also includes an explicit focus on addressing racial inequity.

In the metro area, white residents are twice as likely to own their home as Black residents and 1.4 times more likely than Latino residents. Due to lower incomes and/or living in older properties that can require more spending, more than 55% of renters and 31% of homeowners spend more than 30% of their household income on housing, a level the federal government and other agencies have labeled as “cost burdened.”

The plan was developed by the Community Development Alliance (CDA), a coalition backed by the Greater Milwaukee Foundation, Zilber Family Foundation, Northwestern Mutual Foundation, Bader Philanthropies and the City of Milwaukee.

“This is the first time there is a collective” doing such planning, said project manager Teig Whaley-Smith in an interview.

The group’s analysis looks at current trends and projects that over the next 10 years an investment of $162.6 million will be made in affordable housing, with much of the money coming through the federal and state low-income housing tax credit program. But the strategic plan calls for an additional $135 million to be invested, which would come from a mix of grants and loans, and would create 8,250 new opportunities for Black and Latino homeowners as well 9,750 rental homes for those making between $7.25 and $15 per hour. The hope is that the 8,350 opportunities and 9,750 rental opportunities would each grow to 32,000 over 30 years if the program is sustained that long.

Get a daily rundown of the top stories on Urban Milwaukee
Whaley-Smith, who previously served as the head of the Milwaukee County Department of Administration, led the implementation of a racial equity lens on the project through the use of the Government Alliance on Race and Equity (GARE) toolkit. “The big step with GARE is looking at data from both a qualitative and quantitative perspective,” he said. A number of root causes were identified, as were programmatic solutions.

Through meetings with 70 stakeholders and a review of existing plans, Whaley-Smith said two things became clear: “We need homeownership and we need investment in the areas we intend to serve.”

The first area of focus is on creating or expanding programs that increase the number of Black and Latino homeowners. The second area is focused on creating and expanding systems to keep Black and Latino Milwaukeeans in the homes they already own. Programs under those two areas include everything from creating an acquisition fund to competing with out-of-state buyers to expanding existing efforts like the MKE United anti-displacement fund.

The third focus area is the creation and expansion of systems to increase the affordability of housing for families making between $7.25 and $15 per hour. The fourth is on preserving affordable housing for those in that income group. Programs under those two areas include eviction mitigation efforts, building capacity to preserve affordable housing for which income restrictions are about to expire and changing how the Wisconsin Housing and Economic Development Authority allocates low-income housing tax credits to favor the creation of more apartments that would rent for $400 to $650.

But with a plan in hand, now comes the hard part.

Whaley-Smith and Stilp said programs are being reviewed for who could fund them and who could administer them. “The hardest thing is going to be convening partners to decide what is going to go first,” he said.

“Collective action is hard,” he said. “It’s less about the logistics of implementing and more about developing a set of priorities on what should be implemented first.”

But opportunity is knocking. In addition to the nonprofit partners already committed to the issue, hundreds of millions of dollars are potentially available from the American Rescue Plan Act. The partners don’t have a specific amount they are asking for, but the Common Council is already mobilizing $1.8 million of its $394.2 million allocation to fund a right-to-counsel program to deal with an expected onslaught of evictions. Milwaukee County is also backing the effort.

Whaley-Smith and Stilp are optimistic the plan’s implementation will benefit all of Milwaukee. “The more that we have people thriving in our community the better it is for everybody,” said Whaley-Smith.

A project website, intended to be part of a living plan, is now available at www.HousingPlan.org. The 19-page plan and a status report are available for review. Community feedback is being solicited via the website.

The housing plan identifies a series of metrics to be used to chart progress on an annual basis, including homeownership rates and evictions.

One thought on “Eyes on Milwaukee: Plan Aims To Create 32,000 New Black and Latino Homeowners”