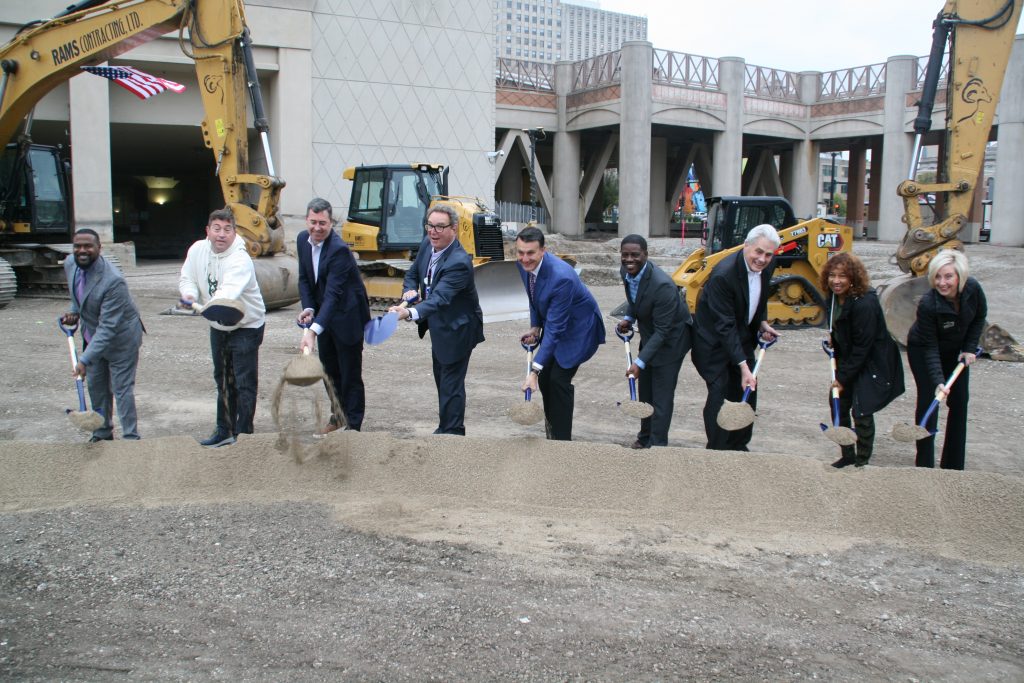 Construction is underway on the $420 million expansion of the Wisconsin Center, 400 W. Wisconsin Ave.

But at least one person involved thinks calling the convention center project an “expansion” shortchanges its potential impact.

“Let’s not call this an expansion. This is a completion of a vision people had 25 to 30 years ago,” said Wisconsin Department of Administration Secretary Joel Brennan at a ceremonial groundbreaking ceremony Thursday morning.

“This project has been in the works since the original building opened in 1998,” said Wisconsin Center District Board (WCD) board chair Jim Kanter. “I feel very confident that the convention center expansion will turn Milwaukee into a sought-after convention center destination.”

The project will add 112,000 square feet of exhibition space to the convention center, creating a 300,000-square-foot hall. A new 2,000-person ballroom and 24 meeting rooms will also be added. Multiple outdoor decks, an indoor waterfall and revamped common spaces will wrap the convention hall.

The expansion will allow one event to be set up while another takes place, a structure that project boosters believe would greatly increase the utilization of the entire facility.

“Right now we might be dark for 12 days for an event that is here for only two,” said WCD CEO Marty Brooks of the setup-teardown logistics. He said the day was the most emotional day of his life following getting married and the birth of his children.

Get a daily rundown of the top stories on Urban Milwaukee
“The timing of the convention center expansion couldn’t be more perfect,” said VISIT Milwaukee CEO Peggy Williams-Smith. She said its early 2024 opening lines up with the anticipated rebound in the convention business.

Williams-Smith said the expansion helped land the 2027 Travel, Events and Management in Sports conference and its expected $8 million economic impact.

“This expansion really puts a capstone on what has happened in Westown,” said area Alderman Robert Bauman, a WCD board member. The expansion, which replaces a surface parking lot, will bridge the gap between Fiserv Forum and the existing convention center and new Bradley Symphony Center.

“This convention center and this area have been home for some time to untapped potential,” said Department of City Development Commissioner Lafayette Crump.

“This is the fuel for growth,” said Milwaukee Bucks President Peter Feigin. “This is so desperately needed and so well thought out.”

Milwaukee County Executive David Crowley called it a catalyst for more people to come to Milwaukee and see all that the city has to offer.

The project is being funded by district revenue, which includes a series of taxes in addition to rental fees. The district debt is backed by a 3% county-wide hotel room tax, 0.5% food and beverage sales tax and 3% rental car tax. The state is providing a $300 million moral obligation that guarantees project debt, reducing borrowing costs by up to $50 million. The district also refinanced $150 million in existing debt to create more financial capacity to take on the project. New project debt is scheduled to be repaid over 40 years.

The city will be paid $1 million each year the Wisconsin Center District records between $1 million and $30 million in income over the life of the expansion project’s debt. For each additional $10 million in incremental income, the city would receive an additional $1 million. Income is defined as revenue, less expenses including capital expenditures and bond payments, but not depreciation.

Bauman is credited with spurring the city revenue sharing agreement by identifying leverage the city had to get some of the money from a pre-WCD tax and was effectively a thorn in Brooks side for much of early 2020. But Thursday morning he had nothing but praise for Brooks and WCD staff, complimenting them on navigating the pandemic and preparing for future growth.

One familiar face was missing: Mayor Tom Barrett. He’s in Washington D.C. meeting with Republican Senate staffers regarding his ambassador appointment. He, along with a contingent from VISIT Milwaukee, also recently made a pitch for the city to host the Republican National Convention in 2024.

Is WCD pushing to get the project done in time for that? “That’s not the motivating factor here,” said Brooks. The project was proposed before the 2020 Democratic National Convention was effectively canceled.

What comes next for the convention center?

“We are not relying on any further development or investments,” said Brooks in an interview. “It certainly would help us to have… more hotels, more bars, more restaurants.” He said his organization isn’t involved in any discussions to develop a convention hotel.

But the city has a site it likes for hotel development. The city-owned surface parking lot across W. Wisconsin Ave. from the Wisconsin Center could house a new hotel as well as an expansion of the streetcar system.

“I’m hopeful they will ultimately expand it,” said Brooks, but he said it wasn’t a deal breaker.

Milwaukee isn’t the only city pursuing a new or expanded convention center. And while the business of booking the facility largely falls to VISIT Milwaukee, what does Brooks think Milwaukee’s pitch is?

“When a new convention comes into Milwaukee you own the city,” said Brooks. “I think our size is really to our advantage.” 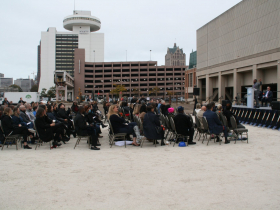 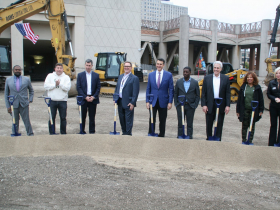 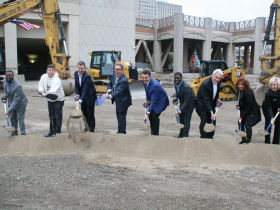 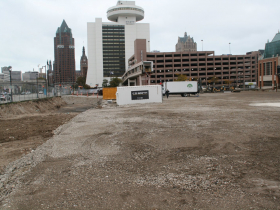 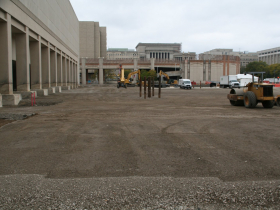 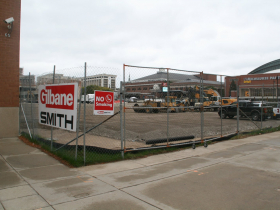 One thought on “Eyes on Milwaukee: WCD Celebrates Start of Convention Center Expansion”