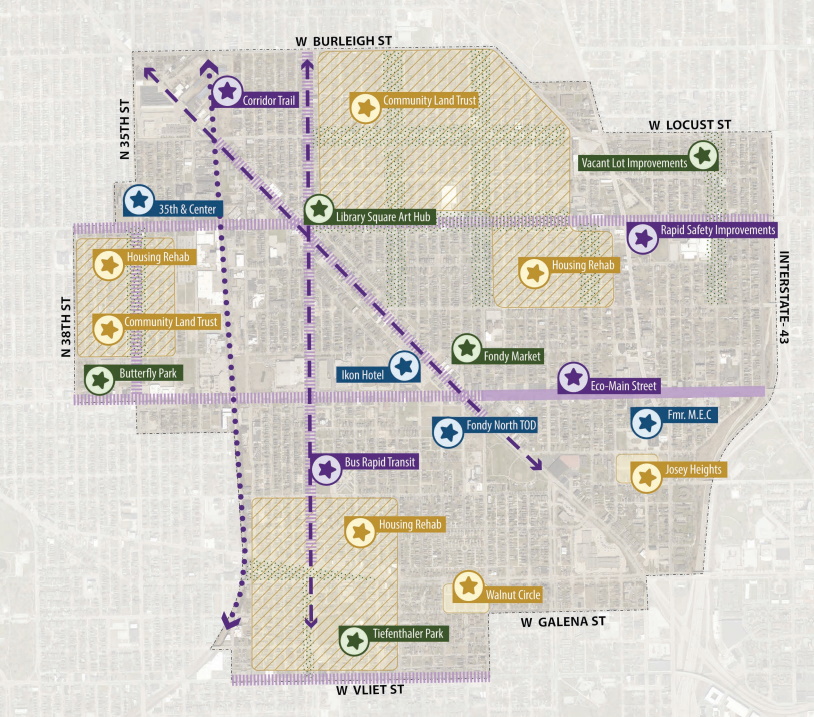 The City of Milwaukee has a new shared vision for the future of four near north side neighborhoods.

It is, as one Department of City Development planner put it, a “contract” with the neighborhood for what the future could look like.

And unlike past area plans that focused almost solely on land use, this plan branches into transportation and safety.

“While we were engaging with the public, while they were interested in land use, there were a plethora of other issues,” said DCD planner Kyle Gast to members of the Common Council’s Zoning, Neighborhoods & Development Committee on Tuesday morning.

“For many people, safety is the number one issue,” said DCD planner Monica Wauck Smith. “We heard a lot of comments about transportation, reckless driving being a huge issue.” The quality of available housing also repeatedly came up.

The new plan is technically an update to the 2004 area plan. “It’s the first of the area plans to be updated,” said Gast of the city’s early 2000s effort to adopt an area plan for every inch of Milwaukee. Other planning efforts are underway to create a specific Bay View Plan from the Southeast Side Plan and revise the Downtown Plan.

Get a daily rundown of the top stories on Urban Milwaukee
But the Fondy area plan was the first to deal with the effects of the pandemic.

Two meetings were held in person before things shifted to a virtual-only format. But the DCD representatives said that didn’t cause a dropoff in engagement. They credit that to the project partners: the Dominican Center, Metcalfe Park Community Bridges and Walnut Way Conservation Corp.

“They were phenomenal as partners and we couldn’t do it without them,” said Wauck Smith.

Alderman Russell W. Stamper, II, who represents the entire area, said it was important that people from the neighborhood had a hand in every step of the planning process. “We did not hire outside consultants. We did not hire people that do not live in the community,” said the alderman. “This was a resident-driven community plan.”

But three residents, all Black women, showed up to oppose its adoption.

“We just found out, the three of us that are here, about the plan,” said Phyllis Wilfort. “I’m really, really dissatisfied with what’s happening here.”

Each expressed a concern that rising property values would force them from their homes because of increased property taxes.

“Our concern is that those of us that have been in our houses for a while, that we are able to stay in our houses,” said Joann Craft.

Virginia DuPriest said that the construction of Fiserv Forum, 1.8 miles away from her N. 14th St. home, was resulting in unsolicited purchase offers for her and her neighbors’ properties.

A prior analysis of property value changes in Milwaukee shows that assessments in the area have steadily decreased in the past decade, lowering tax bills and challenging rehabilitation efforts.

Ald. Robert Bauman brought up the fact that the 146-page effort doesn’t use 2020 census data. But the DCD representatives said it wasn’t available yet at the neighborhood level they needed. Bauman also noted that conflicting population totals are included in the report, which DCD representatives attributed to inconsistencies arising due to plan boundaries not matching census tract boundaries.

“I just want to stress that the plan is not the data per se,” said Gast, suggesting a focus on the broader strategies.

But either way, the area is losing people and has been more for than a generation. Both Bauman and Gast acknowledged much of that can be traced to past “plans” such as demolishing a wide swath of homes and businesses for the never-built Park West Freeway and other failed urban renewal schemes. The end result is that 14% of land, excluding roads, is vacant and 22% of the 9,931 housing units are vacant.

There is also, as Wilfort explicitly pointed out, a racial component. The residents of the four neighborhoods are overwhelmingly Black and impoverished.

“A lot of these efforts try to address those inequities that occurred,” said Gast.
Committee chair Ald. Jose G. Perez, a former DCD employee, said that residents shouldn’t expect an immediate change in the neighborhood as a result of the plan. “Just because the plan gets printed doesn’t mean anything is happening overnight,” said Perez.

The plan is intended as a reference point to guide future decisions. “It sets expectations and sets guidelines for redevelopment and new development in the community,” said Wauck Smith.

The committee unanimously endorsed the new plan. It will next go to the full council.

A full copy of the plan is available on the city website.

Beyond cataloging the efforts and showing how they interconnection, Wauck Smith said including the priority projects can give a boost to fundraising efforts.

Many of the priority projects are carryover projects from the 2004 plan.

The area plan’s first recommendation is to target rapid implementation safety improvements on area streets. In announcing a summer plan for federal funds, Mayor Tom Barrett stood at the corner of N. 24th St. and W. North Ave. and singled out the North Avenue corridor as one where the Department of Public Works could use a combination of paint and plastic posts to make quick safety improvements. The council ultimately approved that proposal. More information.

“Transit in particular is very well used in this neighborhood,” said Gast. But hope is that a planned BRT line on N. 27th St. and a conceptual line along W. Fond du Lac Ave. could spur more ridership and investment. More information.

A long-range project that calls for the railroad corridor through the area to receive a shared-use trail. An initial study was released earlier this year. More information.

Part-neighborhood identity, part-traffic safety, the idea calls for the painting of streets and sidewalks around the intersections of N. 27th St., W. Center St. and W. Fond du Lac Ave. near the Center Street Library. A community-led installation of educational public art is also contemplated. An included image shows the implementation of measures to narrow the roadway and slow vehicles.

The Fondy Farmer’s Market has been a neighborhood staple since 1981, with the adjacent Fondy Park added in 2017. And while the overhead structure blocks rain, it doesn’t stop the cold. The proposal calls for adapting the facility for year-round use. Fondy currently operates the Winter Farmers Market from the Deer District.

Following a fire at the park in 2019, this project is already underway. It calls for rebuilding the playground at the park, 3717 W. Meinecke Ave.

The plans for the community organizations and DCD to support Milwaukee County in redesigning Tiefenthaler Park, 2501 W. Galena St. The county received a $5 million donation in 2020 to support the rehabilitation of the multi-story pavilion at the park.

The plan includes a variety of beautification strategies centered on planting trees for the hundreds of vacant lots in the area. “Of course we want to see development and new homes on vacant lots, but given the number and the market it’s going to be a long time coming,” said Gast.

“Whether it’s the existing project that’s well underway, or another project or an evolution of that, it’s a critical building,” said Gast. In August, developer Kalan Haywood told a city committee the building was gutted and sealed from the elements, but recent visits to the site show a building with many open windows on its upper floors.

The project calls for the three-story, 211,298-square-foot building, constructed in 1928, to hold a hotel on its upper floors. An addition would be built to house a conference center along W. North Ave. The city extended its loan on the deal earlier this year, given Haywood more time to put a deal together. More information.

The plan calls for a significant development on a large vacant lot is located at the northwest corner of N. 35th St. and W. Center St. The site is just west of the The Community Within the Corridor development, now under construction, and the largest private affordable housing development in the state.

“More than anything else, we think housing rehabilitation is so critical,” said Gast. The DCD representatives said the council’s recent American Rescue Plan Act allocations could inject substantial resources into improving both city-owned and privately-owned homes. More information.

The two market-rate subdivisions were victims of the Great Recession, but a 2020 effort with Emem Group rebooted their development. The vacant sites for each subdivision were created by failed urban renewal projects. More information.

Stamper has previously advocated for the establishment of a community land trust as a means to establish a permanently affordable housing pool. The plan calls for a specific focus on homes in an area bordered by W. Burleigh St., W. Center St., N. 20th St. and N. 27th St.