By Jeramey Jannene and Graham Kilmer - Oct 25th, 2021 05:33 pm
Get a daily rundown of the top stories on Urban Milwaukee 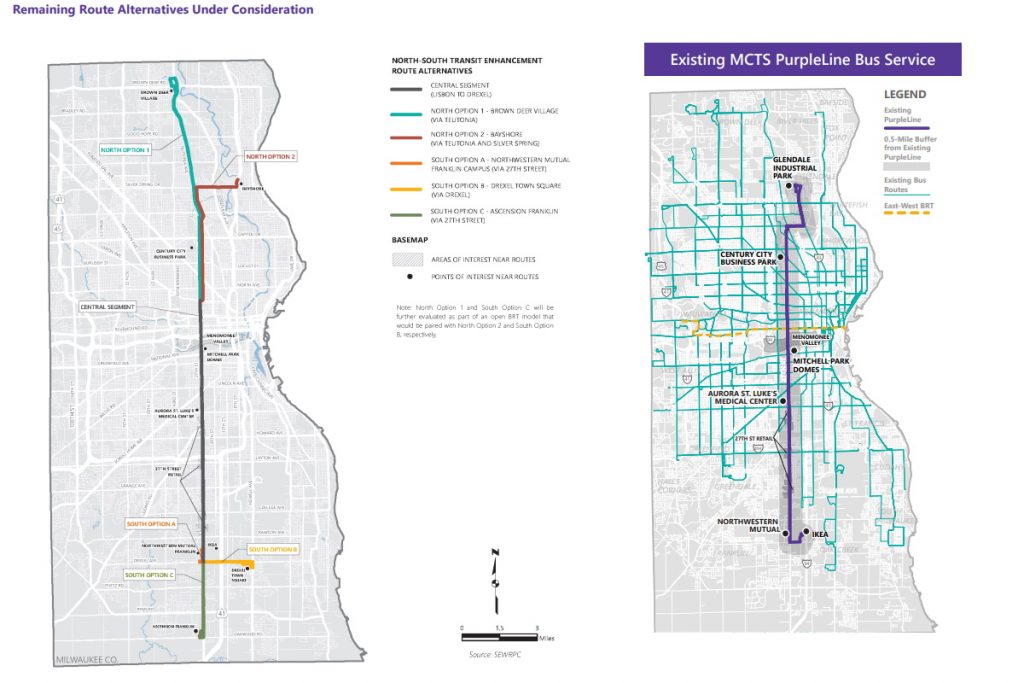 Milwaukee County continues to advance a potential high-capacity mass transit line in the 27th Street corridor. A final route could measure up to 23 miles in length and cost $177 million.

The study began earlier this year and three public meetings are scheduled this week to provide an update on the process and solicit more feedback.

The latest analysis recommends a bus rapid transit (BRT) line be developed in the corridor. Five different route configurations are under study, but the longest option would run from S. 27th St. and W. Oakwood Rd. in Franklin to N. Green Bay Ave. and W. Brown Deer Rd. in Brown Deer.

“As we narrow down the alternatives and work towards a final recommendation for the study, one of the biggest things we’ve learned—through community input and by looking at the data—is that transit service along 27th Street provides access to jobs and other daily activities that largely cannot be done remotely. The existing PurpleLine that runs in this corridor provides a lifeline to jobs, shopping, medical care, and other destinations for thousands of people every day who rely on transit as their main form of transportation,” said Southeastern Wisconsin Regional Planning Commission (SEWRPC) executive director Kevin Muhs in a statement. The agency is leading the planning effort.

During the first three months of the pandemic, the PurpleLine carried more riders per weekday than any other MCTS route.

Get a daily rundown of the top stories on Urban Milwaukee
“A transit investment that improves travel time, accessibility, and amenities for current and future riders will help address some of the transportation equity issues that persist in southeastern Wisconsin and support Milwaukee County’s commitment to racial equity and social justice,” said Muhs.

The feasibility study is expected to be completed this year. The new line, if all goes according to plan and federal funding is secured, could open in 2025.

The 27th Street corridor intersects with the county’s other primary transit corridor at W. Wisconsin Ave. The East-West Bus Rapid Transit line will run along that street. A ceremony to mark the start of construction was held at the intersection of N. 27th St. and W. Wisconsin Ave. in June and service on the line is scheduled to begin in 2022.

The current analysis recommends pausing any further study of rail improvements in the corridor, with a focus on BRT given its lower cost per mile, alignment with the expected ridership and consistency with the existing corridor development.

SEWRPC ruled out light rail and “rapid streetcar” lines because of their high cost per mile, inconsistency with other planning efforts and higher than necessary capacity. The initial analysis acknowledged that the two rail options would likely incentivize more real estate development along the corridor.

Muhs told a county board committee Wednesday that the results of the study do not mean the death of rail investments in the corridor. “It may be justifiable if more resources are available in the future to make that investment,” he said, even if BRT service is implemented.

He told the committee that the current cost estimates range from approximately $134 million to $177 million. Those estimates correspond to a 17-mile or a 23-mile service. Federal funding would be sought to cover up to 80% of the project’s costs.

Two rounds of public meetings and 44 stakeholder meetings have already taken place. A June community partner survey at bus stops found that of the 479 respondents, the top three improvements individuals would like to see are faster travel times, better frequency and on-board wireless internet service. The top three priorities for stations are all-weather (heated, covered) shelters, safety call boxes and lighting. More than half (52%) of respondents accessed the PurpleLine corridor by transferring from another route.

With the technology selected, the biggest remaining question is where does the line go?

Options to use the 30th Street railroad corridor or access Bayshore via Hampton Avenue and N. Green Bay Ave. were eliminated.

All three southern options remain. The options include using Drexel Avenue to end at Drexel Town Square in Oak Creek, stopping at the Northwestern Mutual Franklin campus near S. 27th St. and W. Drexel Ave. or going as far south as the Ascension SE Wisconsin Hospital at W. Oakwood Rd.

Similar to the Brown Deer option, the hospital leg would only be considered as part of a branched route.

More about the North-South Transit Study