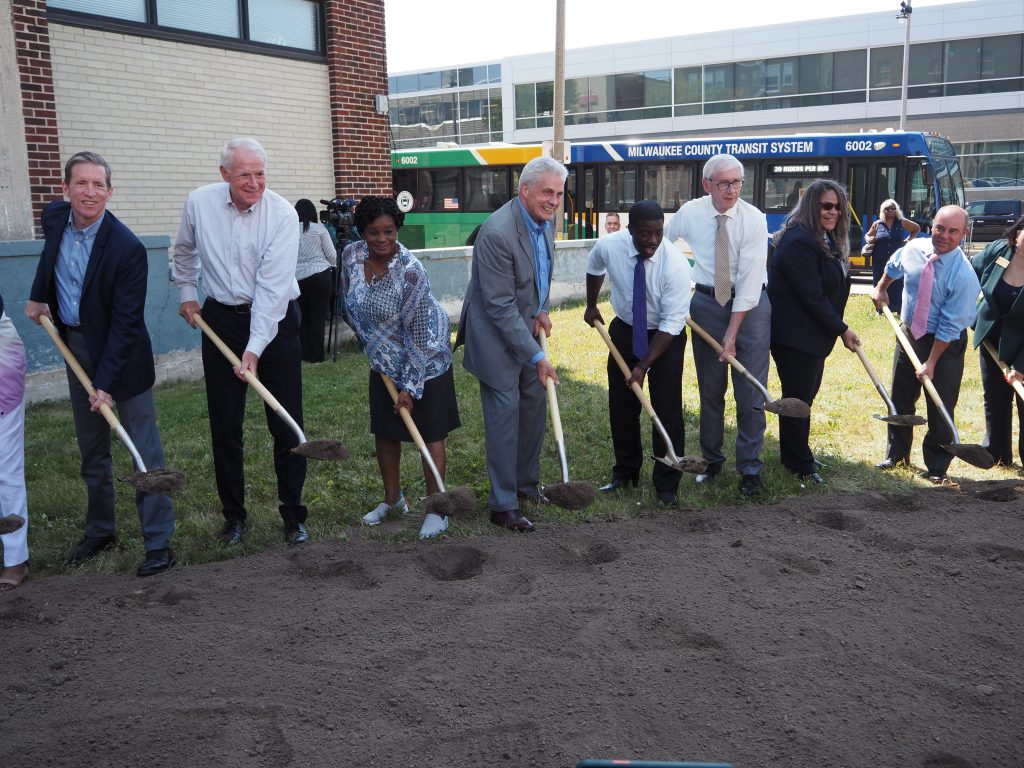 The Milwaukee County Transit System (MCTS) and the Milwaukee County Department of Transportation have been working for more than five years to secure funding, plan and now construct the nine-mile enhanced bus service that will run between downtown Milwaukee and Wauwatosa.

MCTS held a groundbreaking Thursday morning at the corner of N. 27th St. and W. Wisconsin Ave., which will be a stop along the BRT line once it’s completed.

Elected officials and transit officials from the city, county, state and federal governments were in attendance and praised the project as the future of transportation and for its importance to transit in Milwaukee County.

The nine-mile bus service is the first of its kind in Milwaukee and the state. The $55 million project will create a 17-stop, high-frequency line running from downtown Milwaukee along W. Wisconsin Avenue and W. Bluemound Road out to the Milwaukee County Regional Medical Center in Wauwatosa.

The service will have dedicated lanes, off-fare bus payment, multi-door and level boarding, traffic signal priority and fewer stops. Travel times along the route for transit riders will be greatly reduced.

Funding for the project largely comes from a $41 million Federal Transit Administration (FTA) grant, covering 80% of the development costs for the project. The other 20% is covered by the county.

Get a daily rundown of the top stories on Urban Milwaukee
“We’re standing at a crucial intersection of transit’s future,” said MCTS managing director Dan Boehm. “The East-West BRT route will provide improved access to the region’s most vital, most traveled and most congested corridor.”

Milwaukee County Executive David Crowley put it another way. “This BRT is a BFD.”

The county executive said he was borrowing a “famous quote” from President Joe Biden, who was caught on a hot-mic uttering the expletive accented compliment to President Barack Obama after the passage of the Affordable Care Act in 2010.

Crowley said the BRT investment would provide a higher-quality transit service to “residents with disabilities, people without vehicles, families sharing a single vehicle.”

“I often talk about connecting the dots, and that’s exactly what this project is all about,” said Governor Tony Evers.

One of the biggest tasks ahead of the state, and communities like Milwaukee, is the recovery from the COVID-19 pandemic. “Strong infrastructure and robust transportation,” he said, “…are absolutely vital to that goal.”

Craig Thompson, Evers’ Secretary of the Wisconsin Department of Transportation, said the BRT project was a key to the region’s transportation plan, building on existing transit services.

Rep. Gwen Moore, who has often been a successful advocate for Milwaukee transit funding in Congress, said the BRT project would make a difference in the lives of people that don’t have cars and rely on transit to get to access employment and healthcare. She said growing up that she was one of those people, living near the site of the groundbreaking ceremony.

She also endorsed the proposed transit enhancement in the 27th Street Corridor that would run north to south, intersecting with the East-West BRT line. “We gotta have this North-South 27th Street connection,” she said. “It’s gotta happen.”

Mayor Tom Barrett told the crowd gathered that the neighborhood they were in was greatly affected by hospitals and health care institutions left the city for the suburbs and the regional medical center.

“Decisions were made that for some reason all of these medical facilities should not be located in the heart of the city, and there was, in essence, a heart transplant,” said Barrett. “Our responsibility is to do what’s best now for the people of this community who need health care, who need access to employment, who need connections to education.”

Ald. Robert Bauman, who represents the area where the press conference was held, said the changes described by the mayor “left a truly lasting, and I might add, negative impact on this neighborhood. Which is why I believe this investment, this $55 million project, will offer a significant improvement to the quality of bus service, the quality of transportation service, to the residents of this area.”

The area, Bauman said, has a very high transit dependency. “Widening I-94 does them no good. But expanding bus service and improving bus service will absolutely do them good.”

The Mayor of Wauwatosa, Dennis McBride, spoke about the importance of regional partnership represented in the BRT project. “Wauwatosa cannot survive and thrive without a strong Milwaukee,” he said.

But it’s not just Wauwatosa, the mayor clarified. It’s every other municipality and county in southeastern Wisconsin, he said, including, “dare I say, Waukesha.” 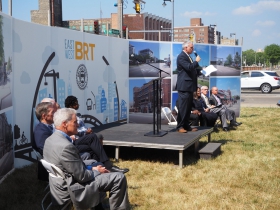 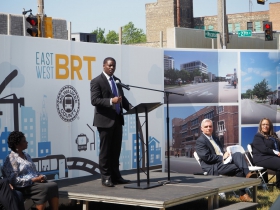 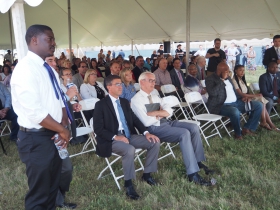 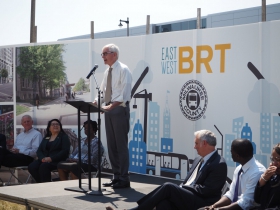 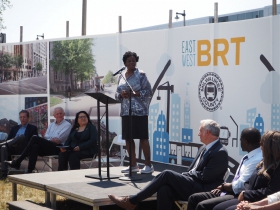 Correction: A previous version of this article said the East-West Bus Rapid Transit line would have 12 stops. It will have 17 stops.