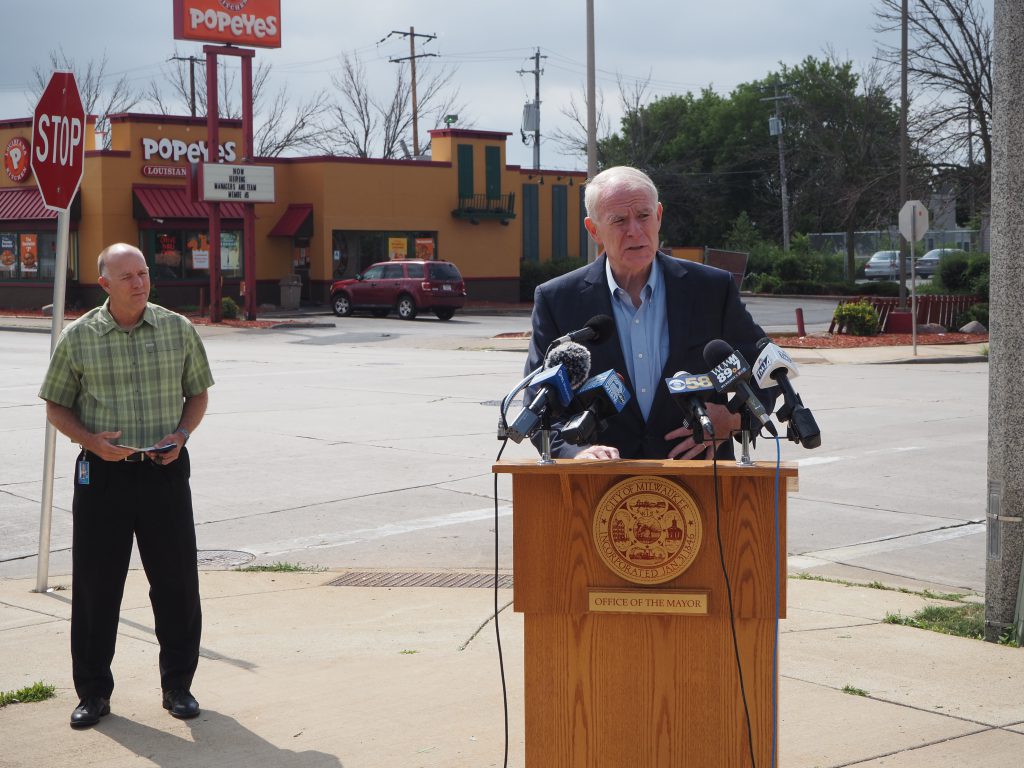 The funds would come from the City of Milwaukee’s $394.2 million allocation from the federal American Rescue Plan Act and are part of broader, $93 million Milwaukee Recovery & Resiliency Plan. The Common Council must approve the plan.

“I think everyone realizes the major impetus behind the American Rescue Plan is now,” said Barrett in describing his proposal to allocate less than 25% of the funding before the summer’s end.

It was the final press conference in a three-day stretch where Barrett has touted opportunities created by his proposal. Prior announcements focused on housing and workforce development.

Tuesday’s announcement emphasized reckless driving and was held outside the St. Ann Center for Intergenerational Care at 2450 W. North Ave. It’s along a six-block stretch of the east-west main street that expands one lane in each direction to two.

“They feel that it creates this tunnel for reckless driving,” said Barrett.

The Department of Public Works would receive $5 million to institute a mix of temporary and permanent traffic calming efforts on approximately 25 miles of city streets. Public Works Commissioner Jeff Polenske said the design focus would be on reducing speeding and preventing right-hand passing.

The commissioner said the effort would be modeled on a successful 2020 effort to calm N. 27th St. between W. Wisconsin Ave. and W. State St. Near intersections and curb extensions were created by painting the pavement a bright color and installing vertical, plastic delineators. Eventually heavy concrete planters were added to deter any attempt to drive through the bumpouts.

Polenske said the same approach would be taken on other streets, as well as adding new pedestrian islands, restriping lanes and making other configuration changes. Streets are being identified as candidates based on their inclusion in the city’s pedestrian high injury network map or being located near schools.

“We believe engineering is key to reducing reckless driving, but we also know enforcement is needed,” said Barrett.

“This is probably the issue I hear about the most when talking with residents,” said Barrett of reckless driving.

An additional $10 million will go towards street lighting infrastructure upgrades. The newly instituted streetlighting fee cannot be suspended and backfilled with ARPA funds because it didn’t exist in 2019 (the control year), nor is streetlighting infrastructure an eligible use for the federal funds. But Internal Revenue Service guidelines do allow the city to certify other 2020 revenues as lost (parking, licensing) and use the ARPA funds to cover a corresponding amount of otherwise ineligible expenses.

A report from the mayor’s office says the Barrett proposal would use the revenue loss provision for $20.2 million of its $93 million plan, including the street lighting and reckless driving initiatives.

Street lighting has become a major issue in the city with aging circuitry failing at increasing rates and an electrician shortage causing extended repair times.

“This is an issue that affects all neighborhoods,” said Barrett. “Just last night the streets were out in my neighborhood.”

A total of $3 million would be allocated to the city’s Office of Violence Prevention to bring its 414Life violence interrupter program to the city’s South Side. The program, which currently operates on the North Side, provides stipends to recognized community members to act as violence interrupters that seek to deescalate issues and provide information and resources related to employment help or gunlocks. The southside effort would include Spanish language outreach.

Barrett’s plan calls for $1.5 million to be allocated towards early childhood education. Most of that funding, $1.2 million, would go towards developing more early childhood education workers that are men of color. A 10-month fellowship would be established by the city’s Office of Early Childhood Education for men ages 18 to 24 with high school diplomas to work with an existing provider.

The plan would allocate $7.5 million to the Department of City Development for a third round of business restart grants. The city has already disbursed $18.5 million in federal funds through the program in up to $25,000 grants to small businesses.

More than 1,000 businesses participated, with the city reporting 48% of funds being granted to “ethnically diverse” businesses. Targeted outreach to impoverished census tracts will be made.

For more details on Barrett’s plan, see our coverage from Monday.