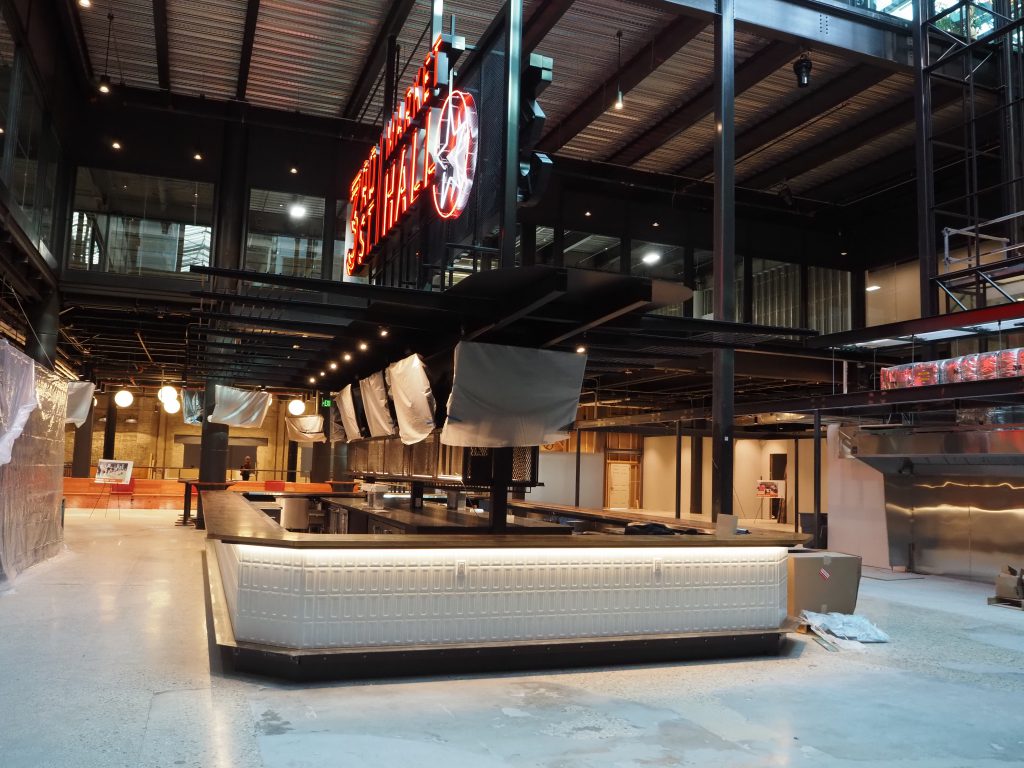 “The hangout of Downtown” will open in just under two months.

Delayed because of the COVID-19 pandemic, restaurateur Omar Shaikh and real estate developer Josh Krsnak have spent the past year refining the concept for the 3rd Street Market Hall.

“We wanted to create something that is a little more experiential,” said Shaikh during a tour Wednesday. “We want this to appeal to everyone.”

The public will get to check it out for the first time on Oct. 18.

The first phase will open with 10 to 12 vendors and grow to 19 by February 2022. Publicly-disclosed tenants include Dairyland Old-Fashioned Frozen Custard and Hamburgers, Supernova Coffee & Doughnuts, Anytime Arepa and Mid-Way Bakery.

A 360-degree, 50-seat bar is centrally located and will offer drinks, including cocktails, beer and wine. “We wanted a gathering place,” said Shaikh.

In addition to food, there will be plenty of entertainment. Food courts are about volume, moving people quickly. The 3rd Street Market Hall is seeking to get people to linger.

Shuffleboard and snookball, a form of pool played with your feet, will be available for free. A video game area will also be free and will double as a place to watch a sporting event.

An indoor turf area, designed to mimic grass, will offer a space for yoga and other activities.

A Top Golf Swing Suite will give groups the ability to virtually hit the links, or perhaps for downtown workers to escape during their lunch hour.

A “selfie museum” will offer a ticketed entry to 26 photo booths designed for people to capture that perfect shot for social media. Students at the Milwaukee Institute of Art & Design are designing most of the spaces.

“Josh came up with the idea and I said ‘that’s the dumbest idea I have ever heard,'” said Shaikh. Then he talked to his daughters and he said it’s all they ask about now. But the audience won’t just be limited to teenagers, Shaikh said he expects most customers to be adults.

Good Karma Brands will have studios for its Newsradio 620 WTMJ, 101.7 The Truth and ESPN Milwaukee radio stations on the same level as the food hall, with only a pane of glass separating hungry patrons from hosts and producers.

Brew City Apparel will operate a small store, and a wine shop is also planned.

“We are building the Taj Mahal,” jokes Shaikh after disclosing that the investment to transform the first floor of the former Shops of Grand Avenue Mall reached $11 million.

The food hall concept was originally announced in December 2018, alongside the announcement that Krsnak and Tony Janowiec were proceeding with their plan to redevelop the dying mall they acquired in 2016.

A 2020 opening date to coincide with the Democratic National Convention was planned, but that changed when the pandemic hit.

Shaikh, Krsnak and Janowiec watched as a number of vendors pulled out. Contracting work was delayed. During a recent tour, work was still going on in nearly every area of the development.

Some fun ideas, like a slot-car racing track, were dropped in favor of practical uses like more seating. The food hall owners are taking on more costs of building out spaces upfront in favor of higher lease rates, a move which Shaikh said will actually open up access to more chefs by lowering the upfront capital requirements.

One of the key differentiators in a food hall versus a mall food court is an array of new or small restaurants versus national chains.

An emphasis at 3rd Street Food Hall is being placed on curating culinary talent.

Dairyland co-owner Kurt Fogle will lead the management of four “hawker” stalls aimed at chefs starting their first restaurant. Those smaller spaces will rely on a large, shared kitchen instead of stand-alone facilities found in the other stalls.

Fogle, his wife Katie Fogle, cousin Brent Fogle and business partner Joe McCormick will make custard on site and operate chef and artist in residence programs. They will lead Dairyland and Mid-Way Bakery. Except for Brent, they all previously worked at restaurants Shaikh operated.

The food hall, backed by 55 investors, has big plans to recoup its costs beyond just serving those stopping by lunch or a happy hour drink.

Shaikh in showing the different areas, including banquet spaces and private rooms that will open in subsequent phases, details how groups will be able to reserve areas. A caterer would merge food hall vendors offerings with an in-house menu to support large events. A heavy emphasis will be placed on customer service, similar to Shaikh’s Carnenvor steakhouse.

The food hall will also benefit from all of the new activity in the neighborhood, including on the former retail floors above.

Described as “horizontal high rise” by Krsnak, The Avenue was slated to open with just engineering firm GRAEF as an office tenant. But since then a number of tenants have signed leases in the former mall. Herzing University, TEMPO, the Metropolitan Milwaukee Association of Commerce, Good Karma Brands and Milwaukee Downtown are filling up the complex with hundreds of employees.

The Westown neighborhood around The Avenue is also quickly changing. The Bradley Symphony Center opened across W. Wisconsin Ave., an expansion of the Wisconsin Center is underway, Milwaukee Tool will occupy an empty office building to the south with more than 1,000 employees. HUB640, an office complex, is replacing Bon-Ton on The Avenue’s western edge.

More people are moving to the neighborhood as well.

The Plankinton Clover Apartments, another part of the mall’s redevelopment, occupy the second floor of the attached Plankinton Arcade building. The arcade building’s upper floors, not owned by The Avenue development group, are also undergoing redevelopment. Kendall Breunig is expanding the number of apartment units in the building by 22, with the possibility of an additional 50 in the coming years.

Shaikh said the neighborhood will serve as a built-in customer base while events and the general draw of the food hall will lure more people.

The design of the food hall and larger mall redevelopment, led by Chris Socha of The Kubala Washatko Architects, has largely eliminated any vestiges of the failed shopping center for all but the keenest observers. New fixtures are everywhere and the large central atrium has been partially filled in. A two-sided, neon sign makes sure you never forget where you are. Black-painted steel is everywhere, with Krsnak noting that more greenery is on the way.

Your next high-end event could be held in what was the paper section at Office Max less than six years ago. People will eat hamburgers where they once shopped for hats.

But the mall’s interconnectedness with the surrounding neighborhood remains.

You can enter the food hall through the former front door of the mall at 275 W. Wisconsin Ave., but you can also take the skywalk system from the east or west. An entrance also exists from the south, adjacent to the the Courtyard by Marriott hotel. Those coming from the large parking garage to the south will be routed into the common areas of The Avenue and towards the food hall.

The 3rd Street Market Hall will add to a quickly growing list of food halls in Milwaukee. The Milwaukee Public Market contains a number of elements of a food hall. The Sherman Phoenix and Crossroads Collective both opened in 2018 outside of downtown. Flour and Feed is another food hall planned by the Crossroads’ owners for Bay View. The North Avenue Market will bring a food hall and retail complex to the city’s West Side. An unnamed project is proposed for N. Milwaukee St. in East Town. 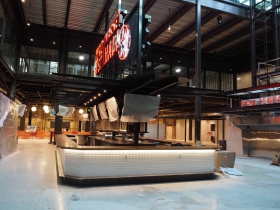 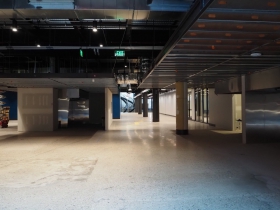 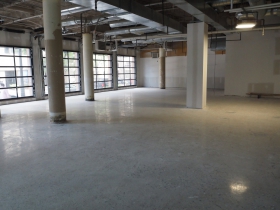 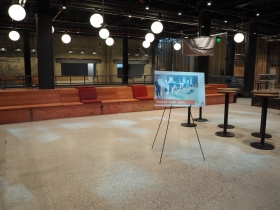 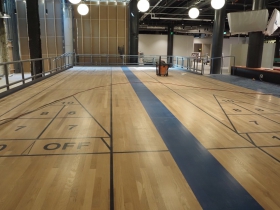 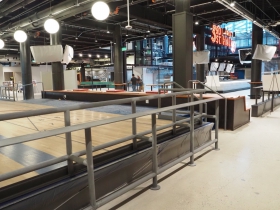 The Mall Before Redevelopment

One thought on “3rd Street Market Hall Opening in October”