The city’s $9 million commitment to supporting the redevelopment of the Shops of Grand Avenue mall into an office building and food hall received a thumbs-up from the Common Council’s Zoning, Neighborhoods & Development Committee, but not before committee members grilled city staff and the development team over project specifics.

The mall’s eastern half  — the historic Plankinton Arcade building — is now the Plankinton Clover Apartments and the western half, built in the early 1980s, is being turned into The Avenue.

To help the latter along, the Department of City Development has negotiated a developer-financed tax-incremental financing (TIF) district. The funds would go towards an estimated $13 million in costs associated with building a new plaza at the intersection of N. Old World Third St. and W. Wisconsin Ave. and relocating a large portion of the public skywalk to the building’s first floor.

“We have over 35 percent more common area than a typical downtown building,” said development team member Tony Janowiec. Unlike many other downtown buildings, the building owners must maintain public access to the space for much of the day as terms of a public easement on the property.

The Avenue’s owners, Hempl Companies and Interstate Parking, announced in December that engineering firm GRAEF will anchor the office space being created in the former food court. The new 3rd Street Market Hall, planned to be the region’s largest food hall, will occupy the first floor.

Instead of providing the cash upfront to the developer, the TIF district would rebate up to $9 million, plus 5.5 percent interest, to the developers from increased property tax revenue. The use of developer-financed TIF districts has become favored by the city as it transfers risk from the city to the developer and avoids costs associated with upfront borrowing. But the interest expense adds up; it is projected to total $7.985 million over the 18-year payback period according to the TIF plan.

The plan is structured to subsidize only the redevelopment of the plaza and skywalk, not the office rents or retail space, said Department of City Development (DCD) senior development specialist Dan Casanova.

But Alderman Jose G. Perez, who has frequently sparred with DCD over the development of the city-subsidized Freshwater Plaza mixed-use development in his district, doesn’t believe there is a distinction. The alderman, who pushed for the city to subsidize a deal to bring a grocery store to Walker’s Point, said the mall deal is effectively a subsidy for retail.

“To me, anyway you look at you’re splitting hairs around the TIF,” said Perez. “I get it that dollars aren’t going to go there, but without it you don’t get a deal done.”

“That’s true,” said Janowiec. He added that tenants are paying market rate leases, and that his firm has diligently separated the costs.

Perez, who said he worked as a security guard at the mall in late 1980s, questioned whether the upgrades to the skywalk were necessary and how many people used the skywalk to access non-mall uses. Janowiec said that even with virtually all of the mall closed for demolition, 4,500 people still traverse the space daily.

“I’ve been in and out of that building for 35 years and I can tell you there is extensive use by people that aren’t accessing anything in the mall,” said Ald Robert Bauman. The alderman, in whose district the malls resides, said it serves as an “indoor public sidewalk.”

Casanova compared the subsidy to similar arrangements with the Milwaukee RiverWalk where the city funds 70 percent of associated costs in exchange for a public access easement. But Perez said he didn’t see that as a direct comparison.

Ald. Milele A. Coggs questioned who would own the restaurants and work on the project. “I just want to make sure as we give any public assistance to a project downtown that it is as inclusive as it can be,” said the alderwoman. She also raised concerns about the viability of the food hall concept.

Janowiec said that minority-owned businesses would be included in the hall. Funky Fresh Spring Rolls, owned by Trueman McGee, an African American, is one of a handful of announced vendors. Because the project is receiving more than $1 million in city support, 40 percent of the project’s construction work hours will be required to be performed by underemployed or unemployed city residents. Twenty-five percent of the work is required to be performed by city-certified Small Business Enterprises owned by minorities or disadvantaged groups.

The developer said his firm intends to announce a contractor next week. “It actually looks like we’re going to exceed the requirements,” said Janowiec of the hiring and contracting requirements.

Janowiec told the committee that he believes the growing number of food halls in Milwaukee will be a benefit to all of them. Coggs said that the success of Milwaukee Public Market didn’t happen overnight, but Janowiec noted that his group’s budget expects the food hall to only earn half the revenue the market did last year.

Bauman praised the project, and said his colleagues’ concerns are more with DCD than the proposal. “The concerns I hear aren’t with this project, but the projects that don’t get similar attention in other parts of the city,” said the alderman. “There is a sense of inconsistency.”

He said he expected the new food hall to succeed. “The streetcar has substantially aided in the boost of activity at the public market and soon you will have the streetcar serving this project,” said Bauman. “I think there will be tremendous connectivity between the two.”

The new district would have a base value of $36.4 million, formed from the assessment of the 21 properties (many of which are condominiums) that make up the mall complex. Existing property tax revenue, once the earlier districts are closed, would flow to the local property taxing entities. The city expects the assessed value of the district to rise to $72.2 million after the redevelopment is complete, effectively doubling in value.

For more on the development, see our coverage from the March 21st redevelopment authority meeting.

The TIF district next goes before the full Common Council. GRAEF is scheduled to move into the redeveloped office space in January 2020. 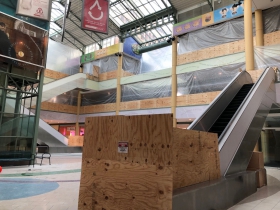 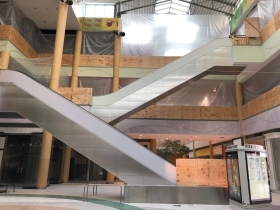 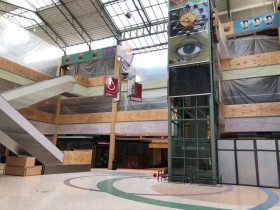