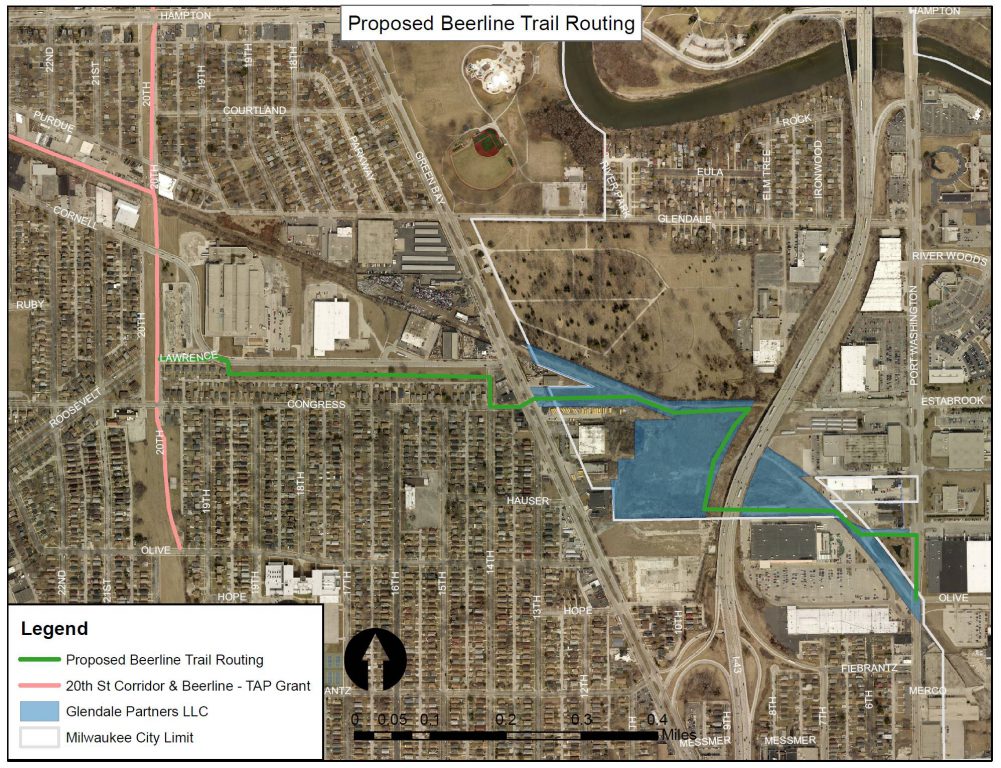 A map of the proposed extension by the City of Milwaukee.

The Milwaukee County Department of Transportation (MCDOT) is adding a bike trail on the city’s north side to its wish list of projects in a federal grant application.

Monday, the department went before the board’s Finance Committee adding another project to its application for federal funding, an expansion of the Beerline Trail. It plans to seek $1.6 million in federal CMAQ funds, which would require a $400,000 match from the county.

The department said the City of Milwaukee has already committed to paying 50% of the local match if the grant is awarded.

The Beerline Trail runs approximately from W. Pleasant Street at its southern end to W. Capitol Dr. at its northern end. It’s not a continuous trail, and the county and the city own sections of it.

Donna Brown-Martin, director of MCDOT, said the state Department of Transportation is making improvements to sections of I-43 in Glendale and they’re building a tunnel under the interstate that, she said, the county could link to the Beerline Trail creating “an urban connection within North Milwaukee from Port Washington Road over to Green Bay Road.”

This extension will allow northside residents to more easily access the Beerline, Brown-Martin said, adding “and hopefully sometime in the future be able to connect to our Oak Leaf Trail.”

Get a daily rundown of the top stories on Urban Milwaukee
In 2020, the city and the county partnered on a project to study bike trail expansion into the city’s northwest side — a veritable trail desert — called the Lincoln Creek Parkway Trail Connectivity Plan.

The Beerline Trail was identified as a possible candidate for expansion to connect northwest side neighborhoods to the county’s larger bike network and the 130-mile Oak Leaf Trail network. This area of the city also has many railroad and waterway corridors that are already publicly owned and could be converted to trails.

When public officials applied for the federal funding to study the area they noted, “The bike network and Oak Leaf Trail do not serve all racial groups equally and this planning effort seeks to begin addressing that inequity.”

The project area on the northwest side has some of the highest concentrations of Black residents and health disparities in the state.