Whether its commuters pedaling to work in Madison, families enjoying the trails through the forests of Vilas County or tourists from around the world exploring the tunnels of the Elroy Sparta Trail, Wisconsin is the state for bikers. And this coming Sunday, Aug. 1, there will be celebration of someone who has been advocating and promoting cycling in the Badger State for almost half a century.

The occasion is the groundbreaking for a new bike trail in the charming village of Cambridge on the border of Dane and Jefferson counties. What makes this trail special is that it is being named for Phil Van Valkenberg. The trail will help connect that village and CamRock County 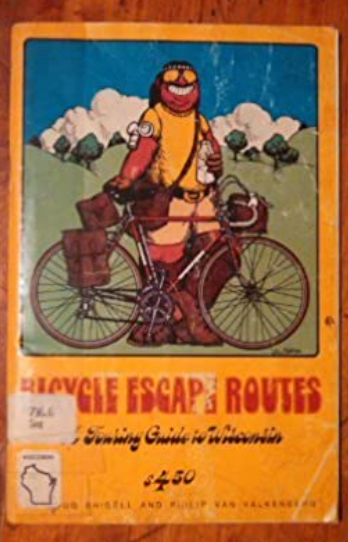 Park to the popular Glacial Drumlin Trail. The Cambridge Village Board voted earlier this year to name the trail in honor of Van Valkenberg, who grew up in the village.

Since the early 1970’s, Phil has been a tireless proponent of biking. I still have a yellowing copy of one his earlier books, “Bicycle Escape Routes: A Touring Guide to Wisconsin,” on my book shelf. In all, Phil wrote eight books about cycling in Wisconsin and the Midwest, as well as seven state biking guides for our state Department of Tourism. He was a longtime columnist on biking as well.

The list of his accomplishments for cyclists is long. He co-founded the Yellow Jersey Bike Co-op in Madison, helped create the Elroy-Sparta State Trail and was a part of organizing the Chequamegon Fat Tire Festival, one of the longest running mountain bike races in the country. Not surprisingly, he was one of the first inductees into the Wisconsin Bicycle Hall of Fame.

If you are fan of biking, you should attend the celebration of Phil and the new trail this coming Sunday. It’s going to be fun. The festivities will take place from 2:30 p.m. to 4:30 p.m. at the Cambridge Winery, 700 Kenseth Way, Cambridge, WI. There will be complimentary soft drinks and hors d’oeuvres, as well as wine for purchase. Live music will be provided by the local band Trophy Husbands. (My wife tells me I’m not eligible for membership in this band. I’m sure that’s only because I can’t carry a tune.) After the formal event, there will be a “Ride with Phil” around town.

Sunday will also be a good time to recount the value of cycling in Wisconsin. Bicycling has great benefits to the public good at relatively little cost compared to other transportation options. Commuting by bike is kind to the environment since more biking to work means less smog and less climate disrupting pollution. Transportation is the biggest source of global warming emissions. If just 5% of short car trips were replaced with a bike, we would reduce emissions of heat-trapping greenhouse gasses by a staggering 4 trillion tons a year.

And needless to say, biking is fuel efficient. I like to joke that my bike gets 50 miles to a pint (and that’s made-in-Wisconsin beer, not imported petroleum).

Biking isn’t just about having a good time, staying healthy and cutting down on pollution. It’s an important part of our state’s economy. A recent study found that manufacturing, commerce and tourism attributable to biking are responsible for adding $1.4 billion annually to the state economy and provide more than 13,000 jobs.

With our extensive network of bike trails, paved and low-traffic rural roads and beautiful scenery, Wisconsin is a mecca for cyclists.

Sunday will be a worthy celebration of Phil, of a new bike trail and of cycling in Wisconsin. Hope to see you there.

Spencer Black served for 26 years in the state Legislature. He was chair of the Assembly Natural Resources Committee and the Assembly Democratic leader. Since leaving the Legislature, Black has been vice president for conservation for the national Sierra Club and adjunct professor of planning at UW-Madison.

This column originally appeared in the Cap Times.