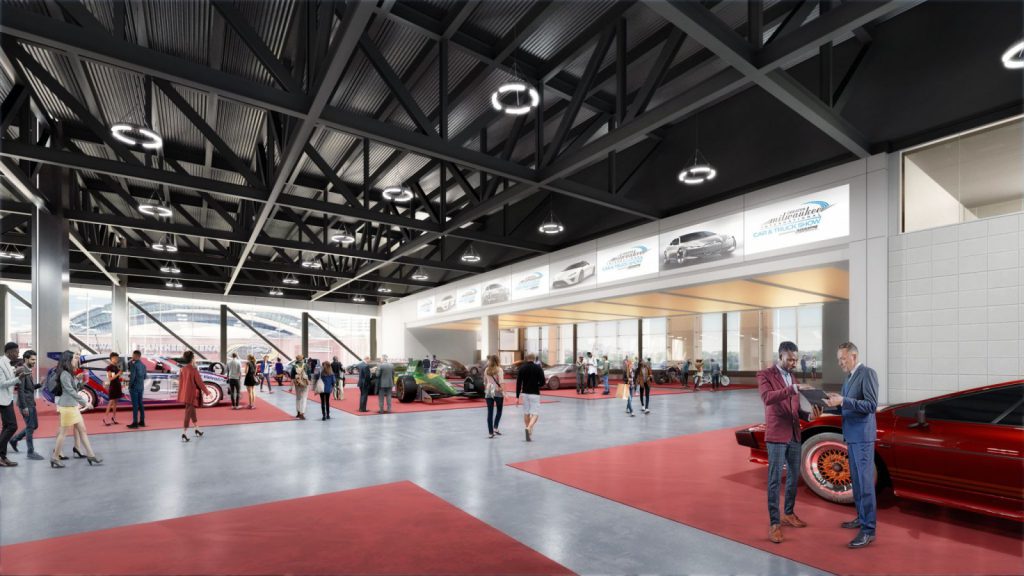 The Wisconsin Center District is pushing forward on its bet that large, in-person gatherings will return by 2024. The first site work on a $420 million expansion project will start in July. Formal construction will begin in January and take approximately two years.

The district board was briefed on the effort by the project team during its Friday morning meeting.

“Where we are now is we’ve completed schematic design. We’re in the design development phase,” said Rob Svedberg of tvsdesign, the head of the project design team. Eppstein Uhen Architects is also working on the building design.

The project will add 112,000 square feet of exhibition space, creating a 300,000-square-foot hall. A new 2,000-person ballroom and 24 meeting rooms would also be added, creating the capability to host two major conventions simultaneously.

The designs are not final, but the proposal calls for multiple outdoor decks, an indoor waterfall and revamping existing common spaces. The district is being represented by CAA Icon on the project.

A nearly six-minute-long video (included below) was shown to board members that features a fly-through of the interior of the revamped building.

District CEO Marty Brooks told the board that things are looking up for the district’s business. All of the laid off employees are back at work, there is a general uptick in people looking to book events and a series of indicators portend that there is an interest in more events.

Get a daily rundown of the top stories on Urban Milwaukee
The district has already sold more than 47,000 tickets to the Beyond Van Gogh immersive exhibit. Patrick Baldwin, Jr. choosing to attend UW-Milwaukee to play basketball for his father, UWM’s coach, is expected to boost revenues at district-owned Panther Arena.

The project is being funded by district revenue, which includes a series of taxes in addition to rental fees. The district debt is backed by a 3% county-wide hotel room tax, 0.5% food and beverage sales tax and 3% rental car tax.

The convention center’s use as a COVID-19 mass vaccination center will end May 28th as part of a transition to mobile and neighborhood clinics.

Milwaukee Bucks guard Pat Connaughton is presumably more concerned this week with the pick-and-pop tendencies of the Miami Heat offense, but that doesn’t mean his real estate firm is standing flat-footed.

A cluster of food and beverage-related businesses are emerging as the long-term users of the Century City 1 building.

The 53,160-square-foot warehouse was built as a spec building with no pre-leased tenants in 2016 by a partnership of General Capital Group and the City of Milwaukee. It was designed as a showpiece of the potential of the Century City business park, but permanents tenants have been hard to find for the 84-acre development near W. Capitol Dr. and N. 31st St.

The Century City effort got a shot in the arm when an affiliate of Good City Brewing acquired the building in late 2018. Now two new companies are joining the brewery.

Milwaukee County could have a program providing free legal counsel to residents facing eviction by July.

Supervisor Ryan Clancy told Urban Milwaukee he has drafted a resolution that would allocate funding to a county “Right to Counsel” program for residents facing eviction and foreclosure. The Department of Health and Human Services estimates the program would provide help more than 14,000 households in Milwaukee.

During the 2021 budget process, Clancy sponsored an amendment that requested the county DHHS to analyze potential ways for the county to establish a “Right to Counsel” program. The amendment specified the program would only be for residents in the 53206 ZIP code, which has the most evictions in the county and children under the age of 18 at the time of the eviction.

A proposed residential apartment tower for the Historic Third Ward would rise 32 stories (365 feet) and contain 295 units, becoming the tallest building in the neighborhood.

The $140 million proposal from Hines Acquisitions for the 0.79-acre site at 333 N. Water St. was presented to the Historic Third Ward Architectural Review Board Wednesday afternoon for preliminary review.

It would occupy what is today a surface parking lot at the southwest corner of N. Water St. and E. St. Paul Ave. kitty-corner from the Milwaukee Public Market.

Wisconsin home sales keep increasing, even as the market continues to tighten.

The latest report from the Wisconsin Realtors Association found 6,935 sales of existing homes in April.

That was a 14.6 percent increase from sales a year earlier, though economist David Clark of Marquette University said the increase isn’t a surprise, since the state was still under Gov. Tony Evers’ “Safer At Home” order a year ago.

There is still hope that the final piece of a 2005 redevelopment plan for the Kenilworth complex will happen.

The Common Council approved a zoning change that year that allowed a development group to redevelop the Kenilworth Building complex, 2185 N. Prospect Ave., into a student housing facility for UW-Milwaukee, the Kenilworth Square Apartments, a home for the Peck School of the Arts and first-floor retail space. A public pedestrian street between the two buildings that front N. Prospect Ave. and N. Farwell Ave. was created to provide access to the Oak Leaf Trail.

It also included approval of an eight-story condominium building.

The City of Milwaukee has found a partner and a building for a new emergency housing facility for victims of human trafficking.

Dana World-Patterson‘s Foundations for Freedom will acquire and renovate an eight-unit apartment building on the city’s north side.

The seven-year-old nonprofit works with females that have been compelled to provide commercial sex acts through physical force, fraud or other kinds of coercion.

City Could Require Laser Scanning of Buildings Slated for Demolition

A proposal pending before the Common Council would add a new way for the city to record its history.

Property owners seeking to demolish buildings would be required to conduct a laser survey of the exterior of their structures.