Residential tower would rise along Milwaukee River across from Milwaukee Public Market. 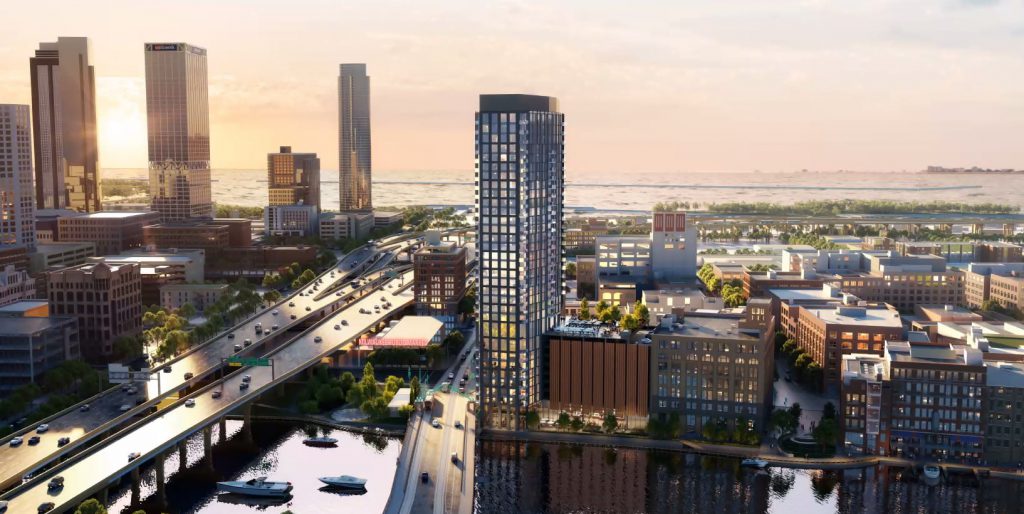 A proposed residential apartment tower for the Historic Third Ward would rise 32 stories (365 feet) and contain 295 units, becoming the tallest building in the neighborhood.

The $140 million proposal from Hines Acquisitions for the 0.79-acre site at 333 N. Water St. was presented to the Historic Third Ward Architectural Review Board Wednesday afternoon for preliminary review.

It would occupy what is today a surface parking lot at the southwest corner of N. Water St. and E. St. Paul Ave. kitty-corner from the Milwaukee Public Market.

The new tower is being designed by the Chicago office of Solomon Cordwell Buenz. The firm also collaborated with Hines on the development of Northwestern Mutual‘s 35-story 7Seventy7 apartment tower.

“[The site is] is a golden opportunity to mark what is possibly the most prominent gateway to the neighborhood,” said architect Devon Patterson, reading directly from the area neighborhood plan. The plan, he noted, asks for something “significant” at this location.

“We were anticipating this,” said board coordinator and UW-Milwaukee architecture professor Matt Jarosz. “There is nothing about this that is out of order.”

“I think it was absolutely the intent of this plan to contemplate tall buildings at landmark sites,” said board member and area Alderman Robert Bauman.

The first floor of the building would include two commercial spaces, one of which would wrap the building to also face a patio along the Milwaukee River.

“We wanted this to be a vibrant retail addition to the neighborhood,” said Patterson “The intent is to really create an active ground floor plane on all three sides of this.”

The Milwaukee RiverWalk would continue to be separated from the property, but a new access bridge would be added to allow public access from N. Water St. and E. St. Paul Ave.

Get a daily rundown of the top stories on Urban Milwaukee
“We think that’s an important addition to the site,” said the architect.

The building would include a 405-unit parking structure to its south. The first eight floors of the residential tower would line up with the parking structure. An outdoor amenity deck with a pool would be included atop the garage, while the indoor component of the tower’s eighth floor would include a coworking space, two lounges and fitness center.

Patterson said approximately half of the parking could be used during the day by area office tenants while residents would use it at night.

“If you look at 7Seventy7, it’s parking wrapping the entire way around that building,” said Hines senior managing director Tom D’Arcy. “We intentionally worked to bring these units down.” He said that’s less efficient from an economic perspective because the units only line one side of a hallway.

Covering the entire parking structure with units wouldn’t work said Patterson. “The proportions on the parking garage and the site didn’t allow us to provide liner units,” he said.

D’Arcy said an office building at the site would result in a building that covers the entire site, eliminating the setbacks along the river and at the corner facing the public market.

Department of City Development planner and review board member Greg Patin said the layout of the building was ideal to leverage the site, but he brought up concerns about the parking structure.

“The tower facade has a good rhythm, the character of it seems appropriate,” said Patin. “But keep in mind that parking garage is nearly as large as the building to the south. It’s very close in scale to that.”

“The facade seems very overwhelming,” said Patin of the garage on both the river and Water Street sides.

“I had a lot of the same thoughts Greg was expressing about the parking garage facade,” said board member and Milwaukee Institute of Art & Design gallery director Mark Lawson.

“We wanted something that was different and distinct and not trying to mimic the existing architecture,” said Patterson of the plan. The garage would be open air, with rust-colored metal panels covering much of it.

“I think there are solutions out there,” said Patin. He noted that the city does not have a parking minimum for the site.

“I certainly would support this with no parking,” said Bauman.

D’Arcy pledged to continue to work to refine the design. He said the market, via investors and lenders, would demand parking with the development.

“The worst thing you can do is be underparked because you can’t change that once it’s built,” he said. “We are, I believe, at the absolute low end of the minimum which is 1.3 cars per unit, not per bedroom.”

Board member Michael DeMichele was the only board member to bring up concerns with the scale of the building. “The scale of this building creates all kinds of unintended consequences,” said the developer. “Why this much scale and density on this particular site?”

“We think it is the best site in the city for residential,” said D’Arcy, ticking off a list of nearby connections, including the public market, Interstate 794, Milwaukee Intermodal Station, The Hop and the overall pedestrian-friendliness of the area. He said building an office building on the site would result in a larger parking garage.

“We have looked at a number of sites across the city in the last three to four years,” said D’Arcy, including land near Fiserv Forum and the Mandel Group’s Portfolio site at the end of E. Ogden Ave. “This is a site that I can rally investors around.”

D’Arcy said the site was more desirable than The Couture‘s lakefront location.He noted that Ascent, the 25-story mass timber tower would target a different audience than the Hines proposal with smaller units targeted at younger renters.

The Hines regional director said the size of the building was dictated by the costs of developing it, including land and construction. “I can’t wave a wand and make the building less expensive,” he said.

D’Arcy said the leasable square footage of the building was similar to that of Ascent.

“At least from the Hines perspective,” said D’Arcy.

“This additional density here is well placed,” said Patin, noting that it was the type of development completed by the streetcar. Lawson said it would be an economic boon for the neighborhood.

“This is exactly the type of signature building on this site we envisioned when writing the neighborhood plan and drafting the guidelines to allow it to happen,” said board member and architect James Piwoni. “[Their] work to date can perhaps be improved but this looks like an award-winning development from the urban design and possibly architectural standpoint.”

The committee granted the project conceptual design approval, requiring it to come back for further review. DeMichele was the lone vote in opposition. A zoning change from the Common Council or zoning variance from the Board of Zoning Appeals will also be required.

At 365 feet, the new tower would be 22 feet shorter than 7Seventy7 and 17 feet taller than The Moderne. It would be 15-feet-shorter than the SCB-designed Kilbourn Tower. The Couture is planned to stand 537 feet.

The project would not receive a subsidy. 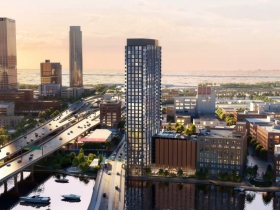 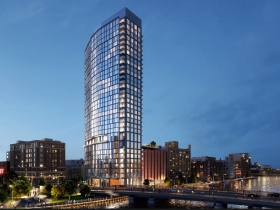 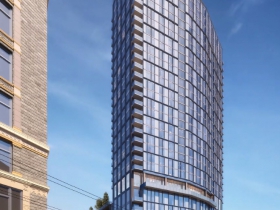 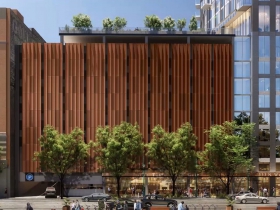 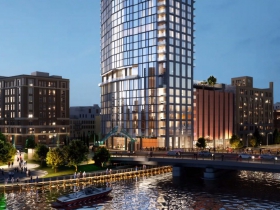 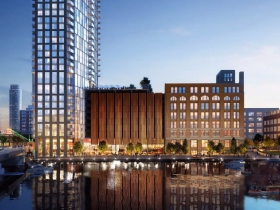 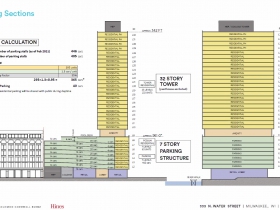 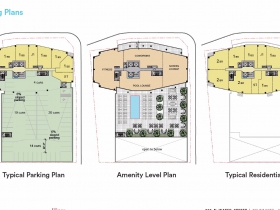 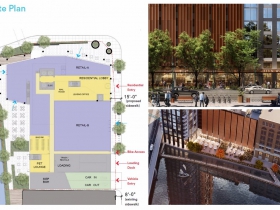 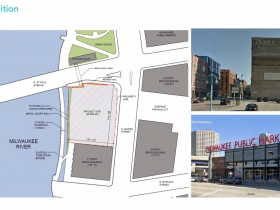 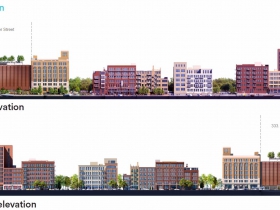 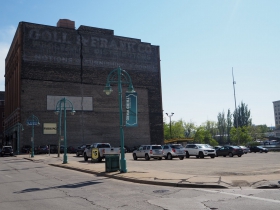 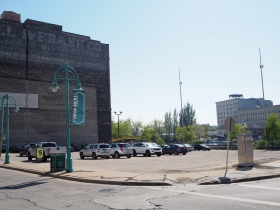 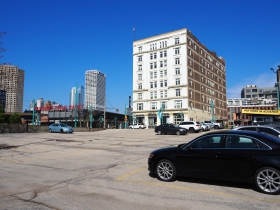