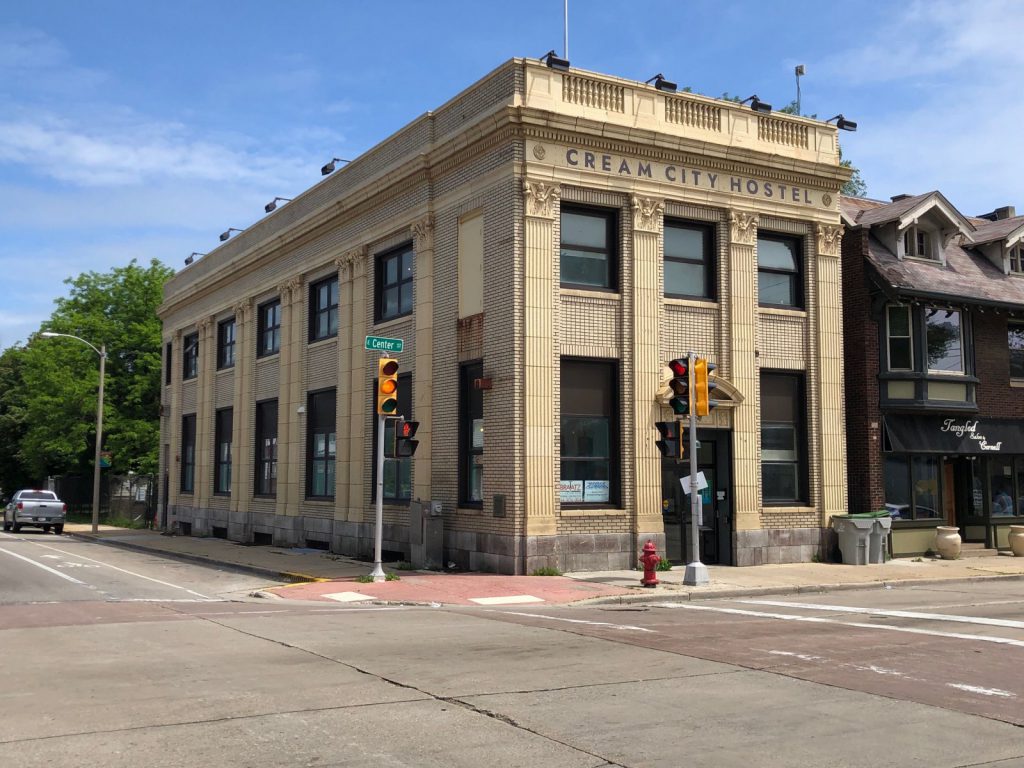 There is new life for the former bank building at 500 E. Center St., but not as a hostel.

Cream City Hostel, which opened in 2019, fell victim to the global travel downturn triggered by the COVID-19 pandemic.

RiverBee LLC, which owns the property, pivoted to seeking a new tenant in 2020. The investment group owns many of the fixtures, including the beds, in addition to the property.

A proposal was introduced to turn the complex into a cooperative housing complex, but tenants were never identified.

Now 4th Dimension Sobriety, already based out of Riverwest, stepped forward as a logical partner to use the facility.

Led by Jason Gonzalez, the 501(c)(3) organization offers an aftercare facility at 2838 N. Weil St. with three-month and six-month programs. The non-institutional operation provides safe housing for those wishing to remain sober.

The nonprofit organization will lease the facility, with an intent to eventually purchase the building.

“We’re in a phase where, after COVID, we wanted to look at a more sustainable model,” said Gonzalez. He connected with real estate developer Juli Kaufmann, head of the RiverBee investment group, and a new home was found.

Get a daily rundown of the top stories on Urban Milwaukee
The organization is hoping to raise at least $10,000 by May 5th to fully leverage a matching grant.

The 7,980-square-foot building was built in 1927 as Holton State Bank according to city records. MPS acquired the facility in the 1990s, but the property sat vacant from 2005 until its sale in 2018.

The hostel, Milwaukee’s first, opened in June 2019 following an approximately $1 million redevelopment. It served thousands of travelers from over 38 countries in its sole year of operation before the pandemic took hold. The hostel business, as of mid-2020, is not expected to recover as quickly as the general travel business. 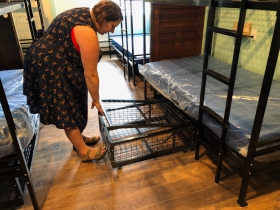 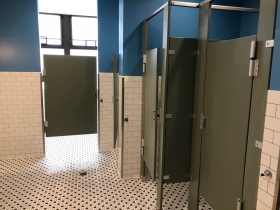 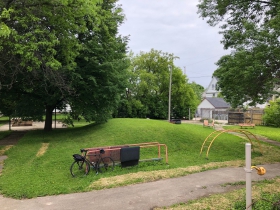 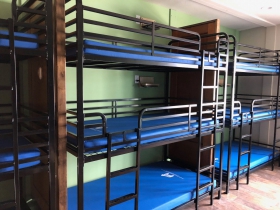 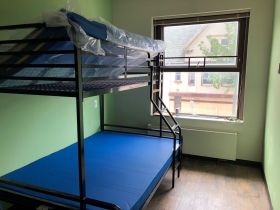 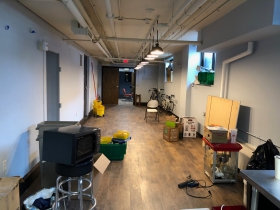 Disclosure: Jeramey Jannene is one of more than 40 passive, minority investors in RiverBee LLC.

Next week the Milwaukee Common Council will begin its review of the Milwaukee Tool financing proposal that would bring up to 2,000 jobs to the Westown neighborhood in exchange for $20 million in city cash as part of a complicated, performance-based tax incremental financing district.

But it’s not what’s in the deal that has raised concern from council members, it’s what is not in it. A labor group is pushing for a community benefits agreement to establish pay assurances and job protection for the contracted service workers that will support the office facility at 501 W. Michigan St.

The site of a former Starbucks cafe is slated to become the latest location for Milwaukee-based Hayat Pharmacy. The independent pharmacy chain will open a location at the corner of E. Brady St. and N. Farwell Ave.

The Milwaukee downtown hotel boom continues, even with a pandemic cutting revenue and canceling events.

Construction is underway on Kinn MKE Guesthouse, a 32-room hotel being created in the four-story office building at 602-606 N. Broadway.

Charles Bailey is developing the hotel, a scaled-up version of his successful Kinn Guesthouse in Bay View. That eight-room hotel, with restaurant Sorella on the first floor, is located at 2535 S. Kinnickinnic Ave.

Bay View will no longer have the meats.

The Arby’s restaurant at the corner of W. Oklahoma Ave. and S. Chase Ave. is proposed to be demolished and replaced with a financial services outlet under a proposal from the University of Wisconsin Credit Union.

Through interviews with 61 organizations and firms involved in housing development or services, the forum worked to measure progress, challenges and overlaps and gaps between governmental and nongovernmental services.

The new agreement between the Wisconsin Economic Development Corporation and Foxconn cuts the potential tax credit award from $2.85 billion to $80 million.

In exchange Foxconn’s hiring and investment targets are cut from 13,000 employees and $10 billion invested to 1,454 workers and $672 million invested. The per-job wage credit falls from 17% to 7% as part of the renegotiated deal, with a minimum salary of $53,875 per qualified job. The credits remain refundable, effectively a cash payment award to the company.

Governor Tony Evers and Foxconn are both calling the new terms a win.

Wisconsin’s housing market saw strong sales figures through the first quarter of the year, even as the number of homes on the market in the state has fallen by more than a third.

The latest report from the Wisconsin Realtors Association found 5,874 sales of existing homes in March, up 0.8 percent from sales in March 2020.

A public-private partnership of the Department of City Development and Community Development Alliance is working to craft a citywide affordable housing plan.

The goal is to create a shared agenda that the city and private partners support to address long-standing issues related to affordable rental housing, racial disparities in homeownership and displacement. Existing studies and efforts will be analyzed to create an action plan followed by the development of accountability metrics.

From W. Virginia St. on the north to W. Washington St. on the south, the city undertook a comprehensive rebuilding of the street that resulted in sidewalks being widened from 7.5 feet to 18.5 feet and a number of street trees being planted. Businesses took note of the pedestrian-friendly environment and began arriving in droves, repurposing existing buildings into breweries, restaurants, stores and an architectural studio. Coakley Brothers put the cherry on top when it added an artistic water tower to its seven-story headquarters as part of a renovation effort.

Now the first new building is rising on the corridor, but it’s not likely to be the last.

Another former Milwaukee Public Schools building will become apartments. Royal Capital Group has closed on its purchase of the former Phillis Wheatley School, 2442 N. 20th St., and is set to begin construction work.

The firm will redevelop the four-story building into 42 units of affordable housing and construct a new building on the southern portion of the 3.8-acre site that contains an additional 40 units. The units would have a mix of one, two and three-bedroom layouts.

Fifteen of the units would be rented at market rates, with the remainder set aside at reduced rates for those making no more than 60 percent of the area’s median income. The majority of the financing for the $22 million project comes from low-income housing tax credits.