By Hannah Haynes, Wisconsin Public Radio - Mar 7th, 2021 04:23 pm
Get a daily rundown of the top stories on Urban Milwaukee 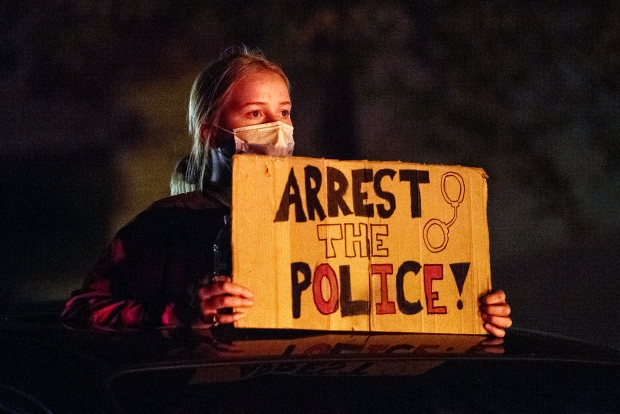 A protester holds a sign as she stands in the open sunroof of a vehicle Wednesday, Oct. 7, 2020, near Wauwatosa. Angela Major/WPR

Fifty people have filed a lawsuit against the city of Wauwatosa, Mayor Dennis McBride and Wauwatosa Police Chief Barry Weber over the handling of Black Lives Matter protests last fall.

In October, the city of Wauwatosa implemented a 7 p.m. curfew and called in the National Guard to protect the city amid fears that the protests could turn violent.

The lawsuit, which has more than 50 plaintiffs, claims the emergency order that put the curfew in place was “unlawfully and unilaterally passed” and violated the constitutional rights of those protesting.

The suit also claims that the Wauwatosa Police Department and “other operational partners” responded to the demonstrations with “brutal, violent and unconstitutional tactics.”

The protests in Wauwatosa came in the wake of an announcement by Milwaukee County District Attorney John Chisholm that a local police officer, Joseph Mensah, would not face criminal charges for the fatal shooting of Alvin Cole.

In the hours leading up to the verdict, McBride made the call to send in the National Guard and enact the curfew. The ensuing protests led to the arrest of dozens of people, including members of the Cole family and journalists.

Cole’s mother, Tracy Cole, is among the 50 plaintiffs in the lawsuit. The lawsuit states that the plaintiffs were ticketed, arrested and/or harassed in Wauwatosa for being present or engaging in the protests.

“There is no factual or legal merit to the allegations in the complaint, and we expect to fully prevail,” McBride said. Chief Weber has since announced his retirement, effective June 1, the Journal Sentinel reports.

More Than 50 Plaintiffs Bring Lawsuit Against City Of Wauwatosa For Handling Of Protests was originally published by Wisconsin Public Radio.

One thought on “50 Plaintiffs Sue Wauwatosa”