Building constructed on site steeped in Milwaukee history. And a week of real estate news. 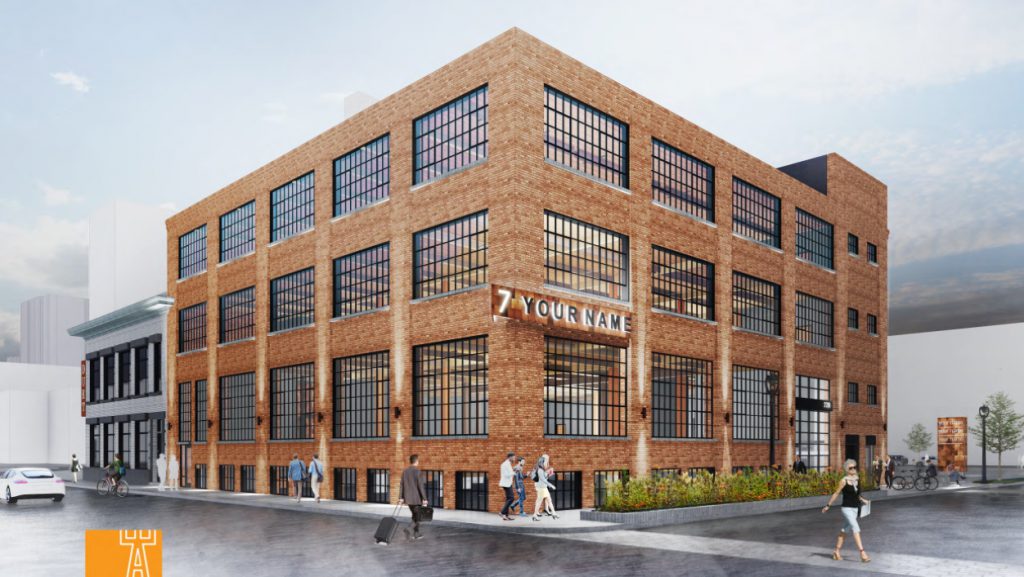 A three-story building in Walker’s Point will get a new lease on life under a plan from developer David Winograd. It’s a site that has already given life to many entrepreneurial dreams.

Plans were released in 2016 to redevelop the 38,222-square-foot building at 228 S. 1st St., but the work never advanced beyond gutting the structure.

Now Winograd, through LCM Funds 35 Offices LLC, is seeking to start construction work. His firm filed for a commercial alteration permit this week.

A leasing brochure from Founders 3 shows open floor plans for office users with exposed-wood ceilings and new windows, including in spaces currently covered. A partially below-grade lower level is also available at a reduced rate.

A Wisconsin Historical Society report says the building, long used as a warehouse, was built in 1912. It was known as “Harley-Davidson Motor Co. Factory No. 7” and designed by the firm of Kirchhoff & Rose.

“The invention of the automated system for milling and threading cast motorcycle engine parts and wheel hubs employed at Factory No. 7 enabled the Harley-Davidson Motor Company to substantially increase the firm’s production capacity to meet the growing national demand for the company’s motorcycles,” said the historical society in announcing the building’s historic designation.

But the motorcycle company was the second of Milwaukee’s industrial giants to use the site.

Newspaper records indicate a prior building (photo) was built in 1892 as a foundry and machine shop for Pawling and Harnischfeger (better known as P&H and now by its parent company, Komatsu Mining). In 1899 a building was added kitty-corner across the intersection of S. 1st St. (then Clinton) and W. Oregon St. (a tunnel may have connected them) further expanding the company’s campus. In 1901 an office building addition was added to the first building. The company also purchased a complex to the east.

But disaster would strike in 1903. A large fire destroyed the 1899 building on the southwest corner. The fast-growing company used the insurance proceeds to relocate to West Milwaukee in 1905, a move it is now reversing as part of a $285 million plan to come back to Walker’s Point. Fire also destroyed the 1892 building in December 1909, then used as a home for the Milwaukee School of Trades, but spared the office addition. The 1894 Sanborn fire insurance map shows the site as a foundry and machine shop, but by 1910 it’s labeled “ruins of fire.”

In 1912, Alonzo Pawling built the current structure on the site.

The Milwaukee Sentinel reported in 1913 that Harley-Davidson would lease the new building from Pawling while it built its current factory on the city’s West Side.

The 1912 building was placed on the National Register of Historic Places in December 2020, enabling historic preservation tax credits to be obtained to support 20% of applicable redevelopment costs. It had been added to the Wisconsin historic register in August 2020, making it eligible for the matching 20% state credit. Is it not locally protected.

Prior to LCM’s acquisition in 2016, the property was already being used, at least partially, as office space. Continuum Architects + Planners was one of many tenants that repurposed the former warehouse space into low-cost office space. A woodworking shop and other light industrial uses could be found in the building.

The latest renovation is intended to push the building upmarket, making it competitive with higher-end buildings in the Historic Third Ward neighborhood located a couple of blocks north. A rooftop deck will be added with both indoor and outdoor space.

Engberg Anderson Architects is the architecture firm working on the project. Catalyst Construction will lead the general contracting.

“The building is basically going to be new from top to bottom,” said Scott Revolinski, a principal with both LCM Funds and Founders 3, in an interview with Alex Zank.

LCM paid $1.1 million for property and an adjoining building, 224 S. 1st St., the one-time P&H office addition. In a separate transaction, it acquired a surface parking to the east at 120-138 E. Oregon St.

The 224 building was redeveloped into a home for Duet Resource Group after an affiliate of the furniture and interior design firm acquired it for $450,000 in 2018 from LCM. Work on the project, completed in May, was led by architect Russell LaFrambois and general contractor Project 4 Services. City records indicate the two-story building contains 7,400 square feet of space.

The Duet and LCM projects join a number that are underway or recently completed near the intersection of S. 1st St. and W. Pittsburgh Ave. Robert Joseph is planning an apartment building for a vacant lot at the southeast corner. Broken Bat Brewing moved into a one-story building immediately to the east. Lacey Sadoff is redeveloping two buildings into housing and commercial space at 145 and 149-153 S. 1st St.

If you go a few blocks further in virtually any direction you run into a number of LCM’s other Walker’s Point properties, including another tied into P&H’s history. It owns the Historic Fifth Ward Lofts, 103 W. Oregon St. The apartments were developed in the Lindsay Brothers building that replaced the 1899 P&H building at the southwest corner of S. 1st St. and W. Oregon St.

It also owns the mixed-use South Water Works complex to the east, the Prime Leather Finishes Co. Building (Mabbett & Breeds Block) to the west, the surface parking lot at 300-306 S. 1st St. to the south and The Granary Lofts multiple blocks southwest. 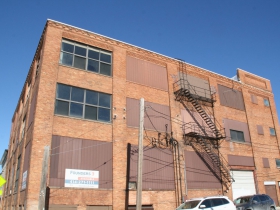 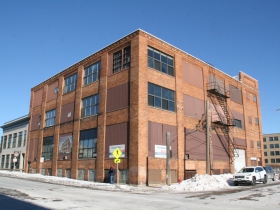 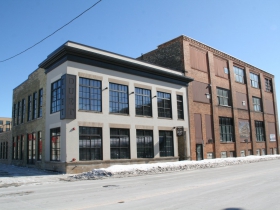 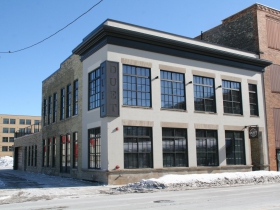 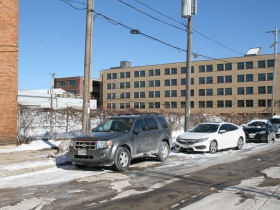 You likely haven’t seen it, but you probably drove above it.

The Wisconsin Department of Natural Resources (DNR) will soon have a new Milwaukee office at 1001 W. St. Paul Ave. The two-story building sits almost directly underneath the Marquette Interchange.

The general contracting team, led by Absolute Construction Enterprises, appears to be nearly finished with transforming the former Falk Company building into the DNR’s Southeast Regional Headquarters and Service Center. The structure was originally built in 1977 and later acquired by Aldrich Chemical Company.

Ascendant Holdings, with support from Ramlow/Stein Architecture + Interiors, is seeking to convert the historically-protected building to an apartment building with 22 to 25 units.

The former Merchant & Farmer’s State Bank, 3338-3356 N. Martin Luther King Jr. Dr., now serves as a medical clinic with a cafe soon to open on the first floor. In 2018 the foundation opened its new headquarters in a redeveloped theater immediately south of the former bank.

Demolition Underway on River One

Sidewalk architects might want to take a walk across the S. 1st St. bridge over the Kinnickinnic River, as a unique situation is at hand.

A building is being both constructed and demolished at the same time.

While a crew from Gilbane Building Co. works to complete the eight-story office building that will soon be home to Michels Corp’s new civil infrastructure division, subcontractor Veit is smashing a portion of the attached parking garage.

The Milwaukee County Board has begun reviewing the county’s plan for a new Mental Health Emergency Center.

The center would be a joint venture between the county’s Behavioral Health Division (BHD) and four health care providers operating in the area: Ascension Wisconsin, Advocate Aurora Health, Froedtert Health and Children’s Wisconsin.

The $12 million, 12,000-square-foot facility would be built on county-owned land at the intersection of N. 12th St. and N. 12th Ln. just south of W. Fond du Lac Ave. The larger site is currently a parking lot for the Marcia P. Coggs Human Services Center.

The city would effectively provide a property tax rebate via a developer-financed tax incremental financing (TIF) district to support the redevelopment of the St. Joseph Center, formerly a convent, into 63 units of affordable housing known as Chapel Gardens.

Milwaukee’s historic preservation regulations are anything but historic.

The City of Milwaukee has changed the ordinance multiple times in the past two decades, including switching the reporting structure for the full-time staff from Department of City Development control to City Clerk control.

Now, led by Alderman Robert Bauman, the council is moving to take control of who gets to sit on the seven-member, part-time board of the Historic Preservation Commission. The move would give the Common Council president, not the mayor, control of who gets appointed for three-year terms.

Sharon and Larry Adams had planned to open a garden center at N. 17th St. and W. Lloyd St.

The Walnut Way Conservation Corp founders, as of July, were going to buy the city-owned vacant lot at 1722 W. Lloyd St. and merge it with a tax-delinquent property at 1726 W. Lloyd St. that contained a one-story building.

The city was prepared to enter into tax property foreclosure on the latter property and then sell both properties to the couple. A Common Council committee unanimously endorsed the move in July 2020, but a week later Alderman Russell W. Stamper, II, without explaining why, asked that the full council hold on the deal.

It turns out, according to a Department of City Development representative, that the building had an active tenant and the city didn’t realize this.

After years of false starts, a new contractor is advancing a city program designed to create jobs and protect the environment. Since November, White Glove Group deconstructed, not demolished, five dilapidated, city-owned homes and is working on a sixth.

The Department of Neighborhood Services expects the firm to complete the remaining four in its initial contract in the coming weeks.

But problems still remain. For the third year in a row, the Common Council will suspend a 2018 citywide requirement that houses built before 1930 must be deconstructed, whether publicly or privately razed, and not demolished. The suspension will be in effect until March 1st, 2022.

A new industrial building is planned for Milwaukee’s far northwest side across from Dretzka Park.

Luther Group plans to develop a 90,000-square-foot building according to a rental listing and city records.

The Elm Grove-based real estate firm would develop the new building on a six-acre site behind two existing industrial buildings it owns at 11601-11745 W. Bradley Rd. in the Park Place business park.