Some 40 on list, many sent multiple tickets, in 'attempt to silence’ critics of police, attorney charges.

By Isiah Holmes, Wisconsin Examiner - Jan 20th, 2021 03:01 pm
Get a daily rundown of the top stories on Urban Milwaukee 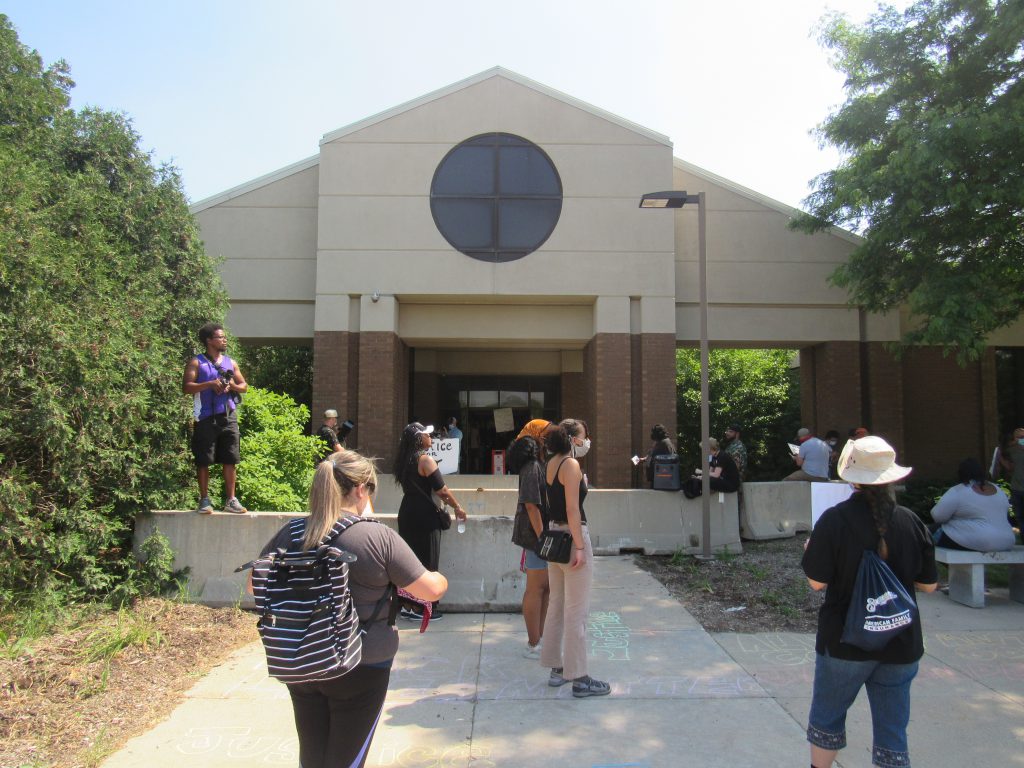 Protesters stand outside the Wauwatosa Police Department, dozens more were inside cramming into the tiny lobby area during the summer of 2020. Photo by Isiah Holmes/Wisconsin Examiner.

The Wauwatosa Police Department (WPD) began tracking activists and created a list of at least 40 protesters as early as July 14, 2020. The list was referenced in a set of emails obtained by the Wisconsin Examiner via open records requests. The internal messages also mention a “protest folder” created sometime during early days of the marches, which demanded accountability after the third fatal shooting involving former officer Joseph Mensah.

“Here is the new updated list,” reads an email sent by WPD crime analyst Dominick Ratkowski on July 14, 2020. “There are around 40 people, I have fully ID’ed.” The message was sent to 17 WPD employees, including multiple supervisors in the investigative division and Chief Barry Weber. Eight minutes later, a supervisor would send another message. “This list can be found in open investigations in the protest folder,” the email read.

At 4:11p.m. on July 14, 2020 John Milotzky, a WPD detective and president of the Wauwatosa Peace Officers Association, replied in the chain: “That list,” he wrote, “only needd [sic] to go to Shorty since he’s in charge of mailing tickets,” using a nickname for a Special Operations Group (SOG) detective.

Although the list was discussed in the emails, it was not provided as part of the records request. As a result, it is unclear who ordered the creation of the list or whose names are on it. A WPD spokeswoman told Wisconsin Examiner that, “the list was created for investigative reference.”

Wisconsin Examiner obtained the emails via open records requests this month. Although the emails were in the inboxes of SOG members, they were also sent to other WPD detectives. The Special Operations Group, specializing in cell data recovery and covert surveillance, is a unit within the Investigative Division.

The emails date to just weeks after Milwaukee’s 2020 Black Lives Matter protests began, showing how early WPD focused on identifying members of the movement. By the time of the emails, the only major confrontation between protesters and WPD occurred on July 7. Protesters marching in the name of 17-year-old Alvin Cole, who was killed in February 2020, had non-violently occupied a restaurant near where the boy was shot by Mensah.

Accompanied by Cole’s family, the marchers used loudspeakers to allow his mother to share the events of his death. It wasn’t the first time they’d brought a demonstration to the restaurant. Although staff initially tolerated the protests, and WPD didn’t interfere, that changed on July 7, 2020. Police officers arrived with several other nearby departments and forced the protesters out. The event was live streamed on Facebook by several people. The email discussing a list of protesters’ names and a “protest folder” date to exactly a week later.

In August, many Wauwatosa protesters began receiving $1,300 tickets in the postal mail. Many of the tickets listed charges like obstructing, disturbing the peace and providing false information to an officer. However, a WPD spokesperson noted in September that the “false information to an officer” charge was auto-generated by their system, and not an actual charge in the citation.

Some tickets were hand delivered by Wauwatosa police officers to activists’ homes. WPD also began calling out specific protesters by name at the marches, documenting license plate numbers, filming or taking photographs of people and deploying spike strips to damage the tires of cars in the caravan. Some protesters, many of them members of The People’s Revolution (TPR), have received several citations. On Sept. 14, as these tactics became routine, TPR issued a press release asserting, “this type of policing is not an anomaly.”

Attorney Kimberley Motley, who represents Cole’s family and others, is assisting many protesters in battling the citations in court. On Jan. 13, after revelations that members of WPD’s SOG identified Wauwatosa mayor Dennis McBride as a “higher value target,” Motley issued a letter and complaint to the Common Council. A PowerPoint slide emailed by an SOG detective in September 2020 points to McBride’s meetings with protesters, Motley and other perceived infractions committed by the freshman mayor.

“This conduct lays bare a troubling scheme by certain members of the WPD to use arrests, questionable surveillance tactics, and the threat of arrests to silence voices critical of them,” Motley writes in the letter. In documents released by WPD via open records requests on Jan. 7, the detail in which the department monitored the protests is clear.

Many examples of these tactics appear in the reports. One report, authored by Detective Timothy Warren in August 2020, describes a protest that resulted in an hours-long standoff between police and marchers. After blocking a street the protest was going down, officers arrested a bicycle scout for the protest. Unable to leave the area due to the blocked roads, the protesters held in place until law enforcement left. Wisconsin Examiner captured the entire event from beginning to end. The arrest was the final consecutive day in a full week of standoffs with WPD.

Warren writes in a section focusing on the bike scout’s arrest: “I have conducted surveillance of multiple protests involving The People’s Revolution. I can identify him on sight and am aware that he is a leader of The People’s Revolution as evidence by his being described as an ‘admin’ on the group’s Facebook page.”

The People’s Revolution’s social media page has more than 6,000 members, many from across Milwaukee and Wisconsin. The arrested individual served solely as one of the march’s numerous bicycle scouts, acting as an early warning system for oncoming traffic. This specific role is noted in Warren’s report.

The detective and other WPD personnel also describe, in the documents, their searches of social media for video and other information. One of Warren’s reports from September 2020 describes a video that was located on a protester’s Facebook page. The report lists eight people identified as protesters through the video, who were each sent tickets ranging from $439-$691. These tickets were separate from the $1,300 citations issued in August.

Motley currently represents more than 80 people who have received protest-related, non-criminal citations. “It should be noted that over 115 non-criminal tickets were issued to my clients in Wauwatosa and not one of them was charged with a crime,” Motley wrote in her letter. “The dollar amounts on the face of the tickets total over $128,000.” Motley and other attorneys continue to battle the tickets in Wauwatosa municipal court, the Milwaukee County Circuit Court and the United States District Court for the Eastern District of Wisconsin. Some of these tickets were also issued during Wauwatosa’s emergency declaration in October.

Although Weber has stated he was not aware of the SOG labeling the mayor as a “target,” he was cc’d in the protest list emails. Weber says WPD is launching an internal investigation into the mayor being identified as a “high value target.” However, the American Civil Liberties Union of Wisconsin and others have called for an outside, independent investigation.