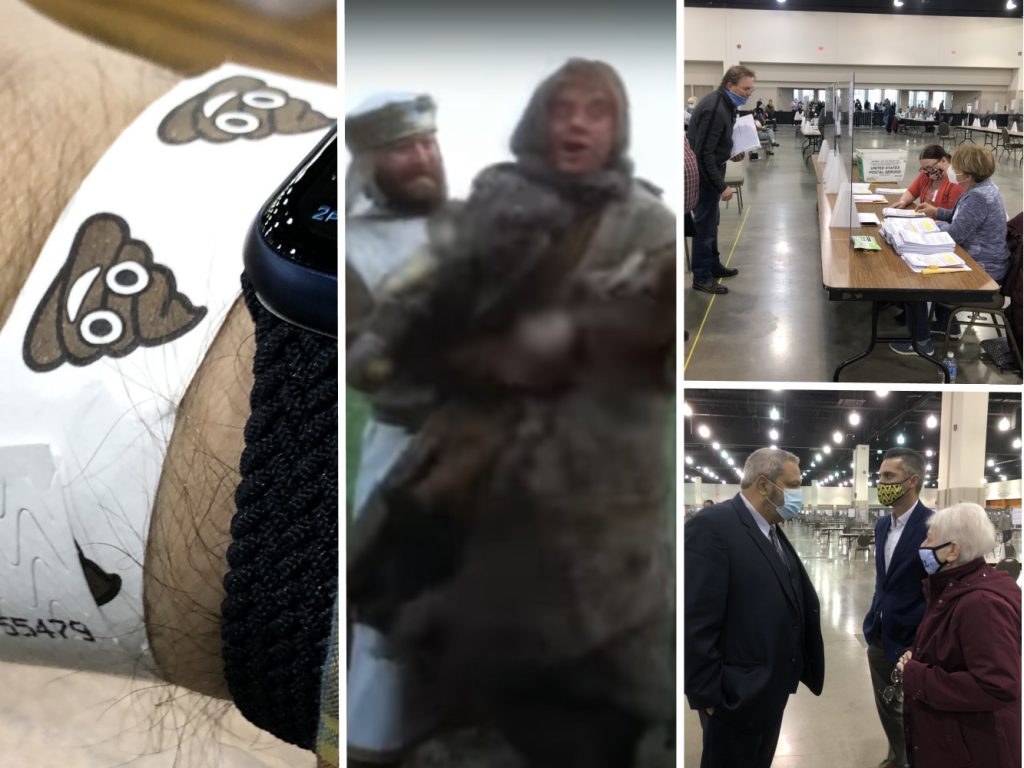 Data bore that out. Approximately 380,000 of the 460,000 ballots had been processed by the end of the day. Sixteen of 19 municipalities had finished their work.

Then tempers flared at the end of the day. The commission chair compared the Trump campaign to a satirical character from Monty Python.

“The issue I want to address is one that doesn’t seem to go away,” said Trump campaign attorney Joe Voiland. He was talking about the policy adopted late Sunday that blocks observers from taking photos of ballots or ballot envelopes that could identify a voter or who they voted for.

The commission voted to clarify the rule on Monday, narrowing the window of unacceptable ways to photograph materials.

Voiland said the rule was still being incorrectly enforced. He earlier testified that he was incorrectly halted from taking a photo of the entire room.

“I observed the individual take a photo with the ballots on it,” said Christenson. But he said it had no identifying information of voters, even after magnifying the image.

Voiland contended it was therefore not a violation.

Commission chair Tim Posnanski, a Democrat, disagreed: “That is a violation of the rule.”  Christenson was less clear.

Voiland suggested a change in the policy was needed.

Posnanski disagreed. “We are near the end, I hope this doesn’t come up tomorrow,” said the chair. “The witness who suffered this terrible indignity is not here.”

Get a daily rundown of the top stories on Urban Milwaukee
Voiland attempted to introduce a series of affidavits to the record with Trump campaign observers stating the rule was incorrectly applied and identified other issues, including the Wisconsin Center District handing out poop emoji wristbands as part of the security check on Tuesday. Posnanski told Urban Milwaukee that the others addressed “minor grievances” that went back as far as the first day of the recount.

The Trump campaign has successfully had a number of affidavits regarding absentee ballots placed on the record that could be used in a potential future legal challenge. An ally of the Trump campaign is challenging 157,000 ballots in court and attempting to get the election overturned, even before the recount is completed.

“I am not inclined to accept any of these materials,” said Posnanski. He said if there are significant issues they should be brought to the commission promptly for a ruling.

“This is starting to call to mind the peasant from Monty Python and the Holy Grail [who calls out] ‘help, help, I’m being repressed’,” he said (see the clip below).

“I am attempting to bring it to your attention before the day ends,” said Voiland.

The lone Republican on the three-member commission warned the Trump campaign: “I would suggest you be a little more succinct with where things are going,” said Rick Baas.

Christenson said he had been telling people things had been tension free until now. “To me it’s frustrating.”

Posnanski said the Trump campaign was trying to “manufacture a controversy.”

He said he wasn’t inclined to say anything on the record previously, but he now would identify illegal behavior by a Trump observer. “One of the Trump observers actually grabbed election materials today,” he said. “There should be no doubt that is prohibited.” Objections are supposed to be made verbally and then materials set aside for further review.

“Tempers are getting a little high right now,” said Baas, who said he would still support adding the affidavits to the record. “When these events happen they need to be brought up faster.”

The commission, on a party-line vote, voted to reject accepting them.

“These items are maintained as rejected evidence, correct?” asked Voiland.

Laughing, Posnanski, an attorney, said “no.”

The commission did not maintain a record of the rejected evidence.

As of now, the Wisconsin Elections Commission has not published updated totals from both Milwaukee and Dane counties. Data released Tuesday showed Trump closing the gap on Joe Biden by 57 votes, but almost 450 previously uncounted votes from the City of Milwaukee are expected to change that.

Day six of the recount started quietly. Fewer workers are present at the Wisconsin Center, 400 W. Wisconsin Ave., then any day prior due to the number of suburbs completing their work. The City of Milwaukee is now processing its in-person ballots, having finished its absentee ballots, and clerks from Greenfield and River Hills are working to complete the recount for their municipalities.

There is a state statutory deadline of December 1st to complete the recount.