The partial-recount is focusing solely on Milwaukee and Dane counties.

By Ruth Conniff, Wisconsin Examiner - Nov 19th, 2020 12:19 pm
Get a daily rundown of the top stories on Urban Milwaukee

I Voted. Photo from Pexels.

President Donald Trump’s campaign filed for a partial recount of Wisconsin’s presidential election results on Wednesday, focusing solely on the Democratic strongholds of Dane and Milwaukee counties, for which the campaign has already paid the state $3 million by wire transfer, according to the Wisconsin Elections Commission. A full statewide recount would have cost the campaign nearly $8 million according to the WEC.

Among the claims made in the petition for a recount, signed by Trump and hand delivered to the Elections Commission on Wednesday afternoon, is the assertion that “mistakes and fraud were committed throughout the state of Wisconsin,” in the November presidential election.

While a recount in two heavily Democratic-leaning counties is highly unlikely to overcome President-elect Joe Biden’s 20,600-vote margin of victory in Wisconsin, the Trump campaign’s petition argues for throwing out tens of thousands of votes because of what it alleges are illegal practices by Wisconsin’s election clerks.

“Municipal clerks throughout the State of Wisconsin illegally altered absentee ballot envelopes by illegally adding witness addresses,” the petition asserts. Under rules promulgated during the administration of former Republican Gov. Scott Walker, clerks may add a witness address to absentee ballot envelopes that are witnessed by a voter’s spouse, for example, when the spouse has neglected to add an address. Clerks may not make any marks on actual ballots.

The Trump petition also asserts that clerks illegally provided tens of thousands of absentee ballots to voters who did not file a written request for them. That charge, if upheld, would disqualify early, in-person voters who signed envelopes when they submitted their ballots, as is customary in Wisconsin, rather than filing separate, written request forms. Still, the Trump campaign regards all of these as “illegal” votes.

“More than 60,000 ballots were cast in Milwaukee County alone” in violation of state law, the petition claims.

Furthermore, the petition asserts, clerks in Dane and Milwaukee counties encouraged voters to falsely claim they were “indefinitely confined,” so they would not have to provide photo ID to cast absentee ballots. Clerks in Dane and Milwaukee Counties  issued guidance last spring telling voters who were quarantined because of COVID-19 that they could qualify as “indefinitely confined” for the April election (that guidance is currently before the Wisconsin Supreme Court).

Finally, the petition claims that election observers were unjustly blocked from viewing the voters casting their ballots at close range, noting that some purchased binoculars to watch polling places.

“There are two classes of observers,” says Wisconsin Elections Commission spokesman Reid Magney, “there are the party representatives from the Trump and Biden campaigns, who are there and have the ability to object to things; they get to be up close.” Then, Magney says, “there is everybody else — members of the public don’t have a right to get right up on everything.”

During the recounts, ”There may have to be a designated observers area for each of the candidates and then the rest,” Magney says. “The county board of canvassers can provide some transparency, but we need to make sure the representatives [of the campaigns] can see what’s going on.” 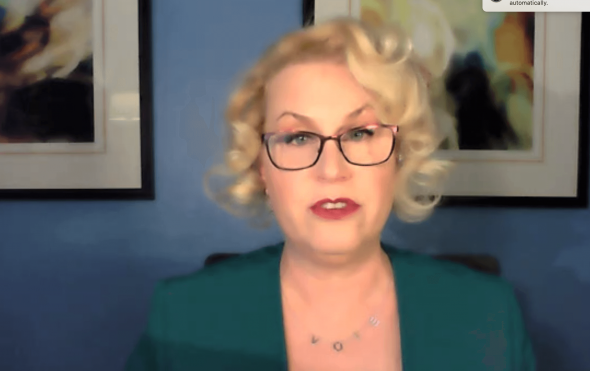 In a contentious meeting lasting more than five hours on Wednesday night, the evenly divided, partisan appointees on the Wisconsin Elections Commission argued about what guidance to give Dane and Milwaukee county clerks, who will receive an order to begin the recount on Thursday and must complete it by Dec. 1.

Republican commissioner Dean Knudson argued that the whole commission should meet to go over the results before they are finalized, even though state statute specifies that “the chairperson of the commission or a designee of the chairperson” shall “publicly canvass the returns and make his or her certifications and determinations” — as  Democratic-appointed chair Ann Jacobs pointed out.

Republican commissioners Knudson and Robert Spindell took shots at Democrats during the meeting, whom they accused of using the COVID-19 pandemic as an “excuse” to try to change election laws. They argued for giving the Trump administration’s claims of fraud and wrongdoing careful consideration, to the outrage of their fellow commissioners, who pointed out that the same election procedures Trump is  labeling “illegal” have been in effect for four years, were crafted by Republicans under the administration of former Gov. Scott Walker, and were not challenged when Trump won under the same procedures in 2016.

In a motion that failed on a 3-3 deadlocked vote, Knudson and Spindell attempted to insert language into the recount instructions issued to county clerks that they ignore social distancing and other safety requirements if these interfere with election observers’ ability to watch the recount at close range.

Knudson also suggested that the Elections Commission tell county clerks to separate out the ballots the Trump campaign has called “illegal.” “We could give guidance at the outset that says, ‘Hey those need to be set aside, because those are going to be under litigation,’” he said. 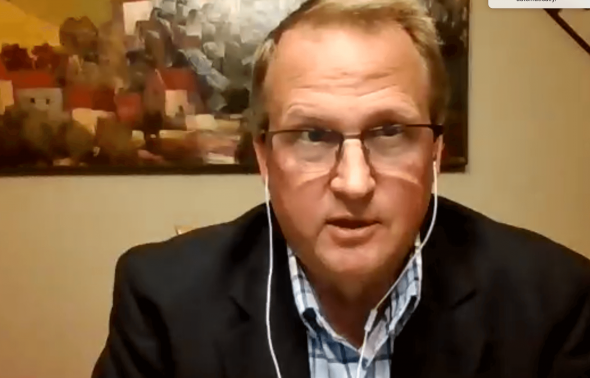 “What you’re asking, Dean, is that we highlight and assert that somehow the clerk that followed the rules we’ve had in 11 elections did an illegal act,” commissioner Mark Thomsen shot back. “There’s no way we’re going to do that.”

Dane County Clerk Scott McDonell says the recount in Madison will begin on Friday in the Monona Terrace Convention Center and will be livestreamed.

If a crowd of angry citizens shows up alleging fraud, “We will have Madison police there in good numbers,” McDonell says, “and be able to control access to the site. Also there will be cameras livestreaming.”

Citizens who want to observe, as well as the designated representatives of both the Trump and Biden campaigns “can try to object to anything,” McDonell says. But as for throwing out large numbers of absentee ballots,  “These seem to be legal arguments. We will quickly rule on them and move on. … Legally cast ballots will be counted.”

Extra votes in the couch cushions

Jeffrey Mandell, founder of Law Forward, a nonprofit law firm that has been helping to organize election-protection work in Wisconsin, is confident that the recount will not change the outcome of the election.

“They’re not going to find 20,608 votes by rifling between the couch cushions looking for change,” he says.

The worrying thing about the Trump team’s strategy, Mandell says, is that “they’ve come up with these legal theories that attack not individual votes but broad categories of voters.”

“I’m deeply skeptical of each of these theories on the merits,” Mandell says of the Trump campaign’s complaints, “and I’m deeply skeptical [since] all of them are challenges to longstanding practices that could have been brought well in advance of the election — if they wanted to — but were brought more than two weeks after, when there is no opportunity for voters to fix their ballots. It’s just wrong,”

Clearly, the Trump campaign is setting up legal challenges to the validity of large numbers of Democratic votes in Wisconsin.

But, says Mandell, “I think they’ll have a difficult time finding a judge who thinks the right relief — even if their case had merit — will be to disenfranchise tens of thousands of voters who followed the rules and longstanding practice when they cast their votes.”

Mandell compared the Trump campaign’s effort to trying to have the result of a Packer game overturned on a Tuesday after the game was won on a Sunday: “It’s not the way it works.”

Thomsen made the same comparison during the commission’s heated debate over recount guidance for clerks on Wednesday night.

“When the Packers beat the Chiefs, the Chiefs aren’t entitled at the end to say … ‘We don’t like the rules that applied, we want to change the rules — get rid of that so we win.’ You can’t do that. It’s not fair,” he said.

For the score to change in the presidential election, a court would have to agree to throw out more than 20,000 votes, switching Wisconsin’s 10 electoral votes over to Trump. Even that would not overcome Biden’s 290-to-232 advantage in the Electoral College.

Trump would have to reverse the outcome in more than one state to win.

Dragging out the process and casting doubt on the election results, even if changing those results is not possible, could be seen as a political strategy to sow chaos and doubt and undermine the credibility of the incoming Biden administration. It also has the trickle-down effect of fomenting poisonous partisanship at the local level, as in the recent Wisconsin Elections Commission meeting — despite the fact that clean, efficient, transparent elections have been a longstanding point of bipartisan pride in Wisconsin.

In the most extreme scenario, a prolonged legal battle over fraud that cast doubt on the results of the recount might push Wisconsin past the deadline by which the governor must choose electors. But Mandell doesn’t think that will happen.

“It would be implausible and absurd to say anyone who narrowly lost could hold electors hostage by stretching out the recount process,” he says, laying out an argument that might actually be made in a Wisconsin courtroom very soon.

“We are in uncharted waters,” Mandell concedes.

Still, he says, “the process has gone exactly as it should.” The election ran smoothly, with double, triple, and quadruple checks at the municipal, county, and state levels. And it’s part of the normal process for a candidate who lost narrowly to seek a recount.

“In that sense, there’s nothing alarming or weird going on,” Mandell says. Except, he adds, that the Trump campaign is making arguments that are “totally outside normal bounds of conduct.”

“What happens when you have an orderly process and one side decides to do something completely outlandish?” Mandell says. “That’s what we’re about to find out.”

Within five business days after the completion of the recount, Trump can appeal to a circuit court, under state statute.

If Trump is not satisfied by the circuit court’s decision, he can appeal to the court of appeals within 30 days.

But even if the legal wrangling over who won is still going on as the state approaches the “safe harbor” deadline for choosing electors on Dec. 8, Gov. Tony Evers could still send a slate of Biden electors to Washington, D.C.

The Elections Commission spent some time on Wednesday night discussing the “certificate of ascertainment” presented to a winning candidate in every election. Under state law that certificate cannot be awarded until all the appeals are done. But that process is separate from the process for choosing electors.

The statute that governs selecting electors specifically states that it “shall be construed to give effect to the will of the electors, if that can be ascertained from the proceedings, notwithstanding informality or failure to fully comply with some of their provisions.”

In other words, the will of the majority of voters determines the electors, and the process should not be held up because of technicalities — or court battles over changing election rules after the fact.

For the first time in history, that law might be invoked.