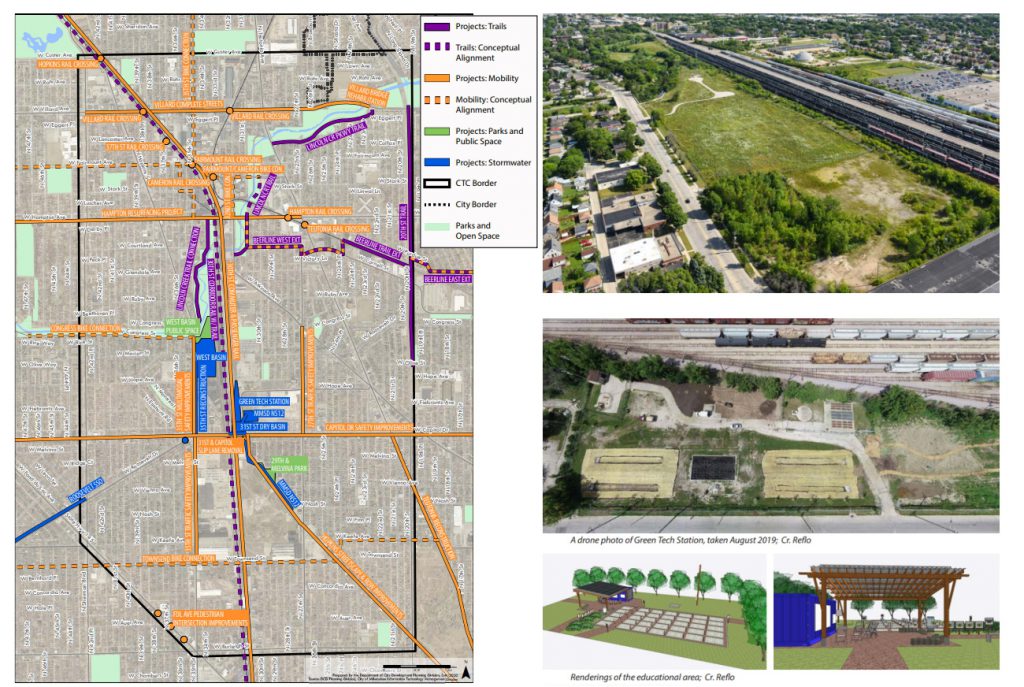 A new plan from the Department of City Development is intended to identify, prioritize and coordinate 45 different government and community projects.

“It’s a bit different than things we have taken on in the past,” said Amy Oeth, DCD senior planner and action plan project manager. The department and project stakeholders presented the plan to the Common Council’s Zoning, Neighborhoods & Development Committee Tuesday.

The plan augments an existing land use and economic development plan for the area. It focuses on coordinating public investment and community projects in an area that has seen declining property values and a growing number of abandoned industrial buildings following deindustrialization. AO Smith alone once employed over 5,000 people in the corridor.

The plan establishes timelines, next steps and funding possibilities for projects related to mobility & streets, off-street trails, parks & public spaces and stormwater management. “Some are very near term and some are conceptual and far off,” said Oeth.

The plans include everything from a multi-site, 40-million-gallon stormwater retention system to a new 5.2-mile trail to link the area with the Menomonee Valley.

The plan also identifies sequencing issues, aimed to ensure the Milwaukee Metropolitan Sewerage District upgrades sewers before the Department of Public Works repaves a street and that any new amenities, like a rehabilitated park, are accompanied by nearby pedestrian safety improvements.

“All the recommendations from this plan are really grounded in health and racial equity goals,” said Oeth.

City planning manager Sam Leichtling praised MMSD, DPW and area residents and stakeholders for coming together, starting in early 2019, to identify issues and opportunities. He also thanked the area’s council representatives, Ashanti Hamilton and Khalif Rainey. “They’ve supported this plan through multiple modes. They’ve been on bikes, on walks and at meetings,” he said of the various outreach events.

Traffic safety is one of the leading issues in the area, notably near W. Capitol Dr. The city’s pedestrian high injury network map shows that four of the 10 most crash-prone intersections in Milwaukee are in the plan area.

Get a daily rundown of the top stories on Urban Milwaukee
Safety improvements include everything from removing high-speed turn lanes to traffic-calming “road diets” implemented as part of planned street reconstructions. The plan also calls for adding bicycle infrastructure and rapid implementation efforts, such as placing plastic barriers on streets, before long-term reconstruction projects can be undertaken.

“Projects like this throughout the city and nationally have been proven to reduce speeds, prevent crashes and make the streets safer for all,” said DPW multi-modal planning manager Michael Amsden. One of the projects was completed this year, the installation of new concrete curb bump-outs near the Sherman Phoenix on W. Fond du Lac Ave., while another, the reconstruction of N. Teutonia Ave., is scheduled for completion in December. Others, like repaving W. Hampton Ave., won’t take place until 2023 or 2024.

The Milwaukee County Transit System‘s MCTS NEXT system redesign, which moves toward more frequent buses and easier transferring, is included as a mobility improvement.

The city, through its MKE Plays initiative, will redevelop and expand the existing park at 29th and Melvina in 2021. The park itself is a legacy of the area’s industrial past and was created when AO Smith demolished nearby homes to create a large surface parking lot. Now the park will expand onto those lots. The new facility will be known as Century City Triangle Neighborhood Park.

What residents didn’t want “was just the makeover of a tot lot and a basketball court,” said Yvonne McCaskill, a member of the Century City Triangle Neighborhood Association and an area resident for over four decades.

She said residents successfully lobbied for a dog park to be included, as well as green space for a variety of games.

“This is resident led,” said McCaskill, a fact confirmed by Rainey when the council approved funding for the project in July.

An additional project would add two acres of public space further north as part of a stormwater mitigation project.

A number of off-street recreational trails are planned for the area, and the plan attempts to document how they would connect and how on-street infrastructure could serve as entry points.

The largest proposal, adding a trail in the 30th Street railroad corridor, would leverage an underused freight rail line. Much of the corridor sits below grade, similar to how the Oak Leaf Trail snakes through the city’s East Side.

“People would be able to get on their bikes at Miller Park and basically go all the way up to Havenwoods [State Forest],” said Cheryl Blue, executive director of the 30th Street Industrial Corridor Corporation and area business improvement district. The trail would run from the Hank Aaron State Trail to W. Custer Ave.

The 5.2-mile trail is undergoing a feasibility study right now.

A series of other trails could ultimately connect to it. The city is already advancing a westward extension of the Beerline Trail from Riverwest and Harambee. It would run primarily east-west along an abandoned railroad right-of-way, a portion of which the city acquired via a donation.

DPW also recently learned it has secured a state grant to advance a trail in the 20th Street corridor. The former streetcar corridor is a north-south corridor owned by We Energies. The city is targeting a corridor from W. Olive St. to W. Villard Ave. The Beerline and 20th Street trails would connect near W. Cornell St., with the Beerline running towards the 30th Street corridor.

A key component of all the plans is stormwater management. “This area has had a lot of trouble with flooding in the past,” said Oeth.

A 2010 storm caused $32 million in damage, including temporarily closing W. Capitol Dr. because the area under the railroad bridge flooded.

The city and Northwest Side Community Development Corporation (NWSCDC) have been working with MMSD on outreach efforts since 2017 said NWSCDC community development specialist Sarah Bregant.

The first major project is nearing completion, Green Tech Station. It will serve as both a stormwater retention system and educational space once completed in 2021. NWSCDC is already leveraging the space for small events.

Other plans call for sewer line improvements and reconfiguration in order to avoid combined sewer overflows that dump sewer water into Lake Michigan and the nearby Lincoln Creek.

The biggest project in the plan is the MMSD West Basin, which will hold up to 31 million gallons of runoff on eight acres of vacant industrial property along N. 35th St. between W. Congress St. and W. Hopkins St.

Another project, the 31st Street Dry Basin, would be connected via pipes under W. Capitol Dr. with the West Basin project. It would handle runoff surges in a 1.4-acre property located just east of the railroad corridor.

More details on the stormwater projects are available in our coverage from October 21st.

The committee unanimously endorsed the action plan, which will next go to the full council for approval.

“I just want to say how proud I am of the collaboration and partnership that went into this,” said Hamilton. “These groups here are the heart and soul of that area.”

A full copy of the action plan is available on Urban Milwaukee.

One thought on “Eyes on Milwaukee: 45 Projects To Improve Century City Area”