With eyes on using it for a future bike trail, the City of Milwaukee is acquiring a former railroad right-of-way from N. 20th St. to N. 24th Pl. just south of W. Hampton Ave.

But don’t expect that trail to materialize anytime soon. “We have no intention at this point to do any paving or construction of that bike trail,” said Redevelopment Authority of the City of Milwaukee assistant executive director Dave Misky.

The proposal was unanimously endorsed by Common Council’s Public Works Committee on Wednesday morning. The city will hold the land, which Misky said is wide enough for a future trail, until funding materializes for a bigger plan.

The property, which will be donated to the city by Glendale Redevelopment LLC, was formerly part of the Beer Line railroad spur which ran southeast from a junction near N. 32nd St. and W. Hampton Ave. through Riverwest and a host of other neighborhoods to a yard near N. Old World Third St. and W. Highland Ave. The line served over 100 industrial customers as well as Schlitz, Pabst and Blatz during its heyday many decades ago.

The spur has been abandoned in segments as industrial customers have closed or ceased using rail transportation. Once owned by the Milwaukee Road, the remaining active corridor is owned by the state and leased to Wisconsin and Southern Railroad (WSOR). Other parts of it are now in private hands or part of the Beerline Trail and rebuilt N. Commerce St.

Glendale Redevelopment, led husband-and-wife team Brian Monroe and Nancy Neumann, acquired the N. 20th St. property in 2007 as part of a bigger three-mile-long corridor called the Nut Line by WSOR as part of a plan to redevelop a former Milwaukee Road rail yard in Glendale between N. Port Washington Rd. and N. Green Bay Ave. south of W. Estabrook Blvd. This includes a segment from N. Richards St. to W. Capitol Dr. that the city and a host of partners extended the Beerline Trail onto in 2015.

The firm has sold off as much as possible of the approximately three-acre N. 20th St. property to adjoining property owners, said Misky, and is now looking to give the remainder to the city.

Federal tax benefits are available to landowners that donate property to government or charity without receiving a financial boost to other holdings.

To the west of N. 24th Pl. the corridor is still an active rail line  The segment from N. 20th St. to N. Green Bay Ave. is now owned by Milwaukee Iron and Metal and Athea Packaging, the latter of which announced expansion plans in October. 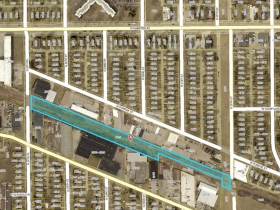 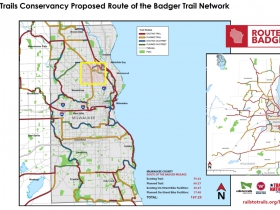