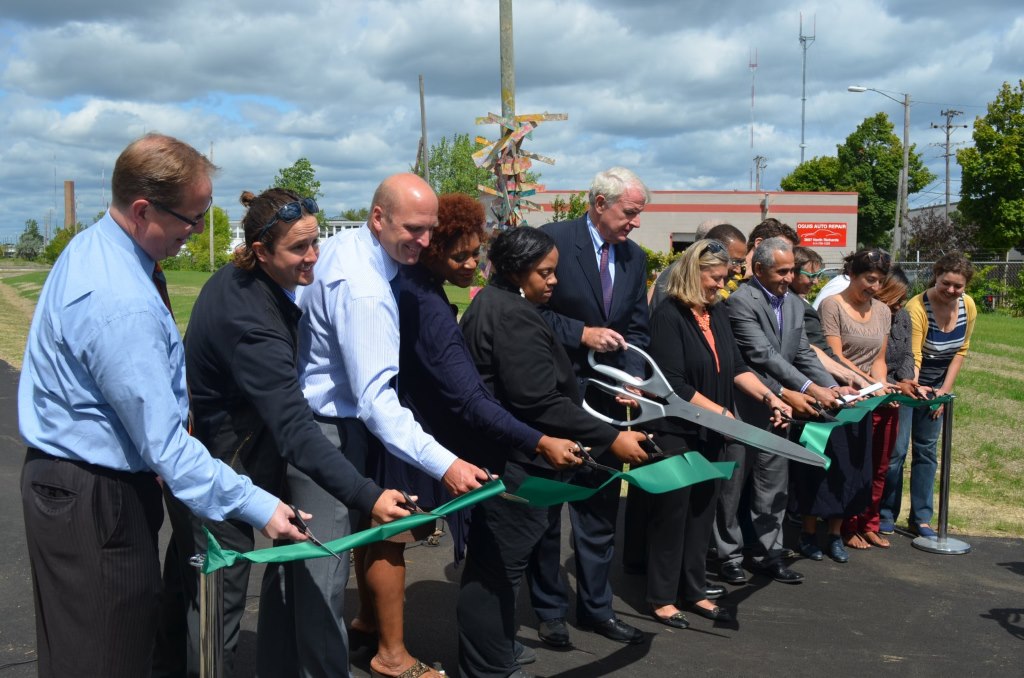 Local elected officials gathered yesterday for a ribbon-cutting ceremony to commemorate the completion of the Beerline Trail extension. The extension adds a 10-foot wide asphalt trail to the Beerline Trail where there once was just a dirt path and is meant to encourage non-motorized transportation like walking, bicycling, and more (motorized wheelchairs and assistive scooters are allowed). The 0.67 mile long trail stretches from North Richards Street (just north of the intersection on E. Keefe Ave. and N Richards St.), through the railroad bridge over East Capitol Drive, and to a cul-de-sac just north of the railroad bridge. The trail connects the Harambee and Riverwest neighborhoods.

The trail is part of a larger space known as the ARTery, an “art park” that was home to Vedale Hill’s “Hoop Dreams” art project last year. The ARTery has taken over land that was once a railroad providing transportation for breweries, hence the Beerline name. After its decline, the area became “a hub for graffiti, drugs, and many shady things,” as Hill has noted. But now the area is open to public performances to any group in the area and is home to a performance space, sculptures, and many signs indicating the area has been reclaimed. In recent years, the park has hosted a variety of events meant to engage the community, including potluck dinners, open mic nights, musical and dance performances, mural painting and trivia games.

Dasha Kelly, Creative Consultant and Director of Still Waters Collective, said the project used community feedback to develop the activities and infrastructure that will go into the park. They invited the business community, arts community and residents to engage in different activities and events to envision how to make a space “that would be relevant to their everyday lives,” Kelly said. At last year’s summer music series here, Kelly noted, “people were amazed they were able to come together on this once abandoned space and not feel abandoned as themselves, abandoned as a network and abandoned as a voice.”

As part of the project, the group is not only developing the trail but also doing community development with the different businesses within the neighborhood.

The ARTery is part of the Creational Trails effort, which aims to “activate spaces as a means of encouraging acceptance and growth of the cultural diversity in Milwaukee,” according to its website. The project was initially funded using half of a $350,000 grant from ArtPlace America (which also funded other projects in Milwaukee). The ARTery project is led by the Greater Milwaukee Committee’s Innovation in Milwaukee (MiKE) initiative, and is managed by a non-profit organization called Beintween. The railroad property was bought by the city from a private owner before trail construction.

For the extension, the GMC and Beintween also partnered with the city, the Riverworks Center, the Harambee Great Neighborhood Initiative,  Still Waters Collective and other arts and cultural organizations and leaders. The extension was funded through a $1.1 million grant by the federal Transportation Alternatives Program, with $833,532 or 80 percent from the federal share and $308,383 or 20 percent from the city’s local match.

The ceremony was emceed by Commissioner of Public Works Ghassan Korban. Mayor Tom Barrett thanked everyone involved for making the railroad line a part of the city after decades of it going unused and for facilitating a bond between Harambee and Riverwest.

“We want people to be here, we want them to interact, and the more people that interact here, the safer it’s going to be. Let’s recapture out public spaces, and let’s use them for families and let’s use them for people who want to get out and get some recreation and, again, let’s do it in the safest way possible,” said Barrett.

Ald. Milele Coggs remembers when the ARTery was used for dumping old tires. She now considers it an example of what community collaboration can bring and a template for how we can better develop similar areas throughout the city. Even before the trail was paved, she noted, there were still people enjoying the space and the events that were held there. “It is so rewarding, and great to see, ideas come to fruition,” said Coggs, “I just look forward to seeing people bike down this way and to see the coming together of the community.”

Said Ald. Nik Kovac: “These trails are less about just working up a sweat and getting somewhere fast and more about enjoying neighborhoods from the backside… Not that a bike trail is suddenly going to suddenly solve all our problems, but there are too many not-so-invisible lines in the city that separate one half of Milwaukee from the other half.” Projects like this, he added, “really help us all to come together in a new way.”

GMC President Julia Taylor of GMC said that the ARTery is a great example of “creative placemaking” — enhancing the economic development and wellbeing of communities through art and culture. “The change really happens for three reasons: a common vision that’s owned by the community, strong partners, and tenacity.”

The ARTery’s opening comes just prior to Riverworks Week, Sept. 15-19, organized by artists Kelly, Brad Pruitt and other artists. Such artists as Jill Sebastian and Annushka Peck are helping plan temporary and permanent art installations and design elements for the ARTerty path.  And the Riverworks Business Improvement District is working to attract more creative businesses and projects to the area.

Darryl Johnson of Riverworks Development Corp. offered a kind of final thought on the entire project: “We all have worked hard to make today possible. And this is just the beginning…What today is, and what tomorrow will bring, is happiness and joy for this community.”

Photos From the Ribbon-Cutting 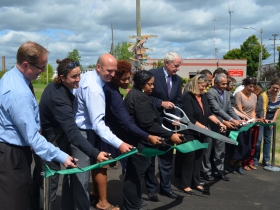 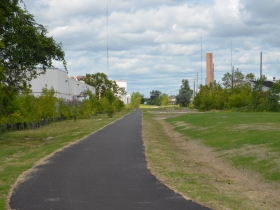 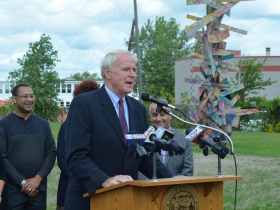 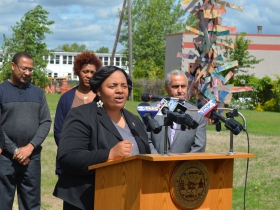 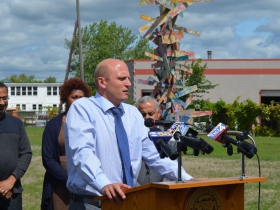 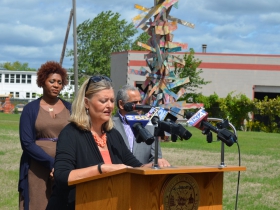