Plus: Community boatyard renovated + a roundup of the week's real estate news. 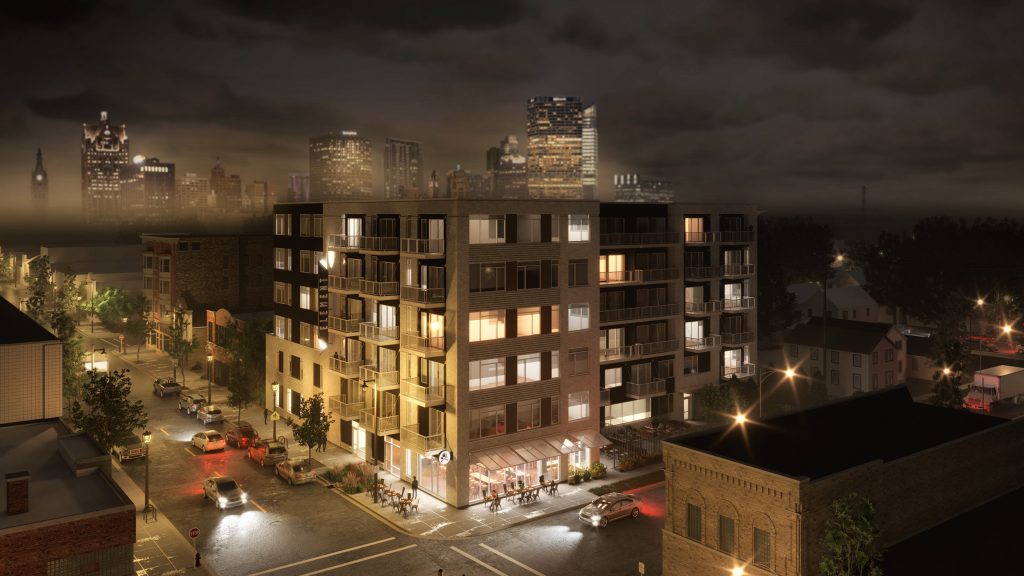 New Land Enterprises is planning a new apartment building for a vacant lot in Walker’s Point after its latest project reached 100 percent occupancy less than two months after opening.

“We looked at Quartet and said there is clearly a market to do more of these,” said firm director Tim Gokhman in an interview.

Quartet, a 48-unit apartment building at 1001 S. 2nd St., was the firm’s second Walker’s Point project. It opened in late May and follows Trio, a three-building, 120-unit apartment complex located a block southeast.

“We have been looking at that site for a couple years,” said Gokhman, adding that the firm could never quite figure out how to utilize it. Now the firm is fast-tracking the new project following the success of Quartet. The design of the new building would mimic that of Quartet.

Korb + Associates Architects served as the architect on Quartet and is now working with New Land on Element. The firms have partnered on many New Land projects in recent years.

Gokhman said the building is targeted at creating affordable, new construction without a government subsidy. He said there is a large market of people that make enough that they don’t qualify for buildings subsidized by low-income housing tax credits, but can’t afford high-end new buildings. Developers have struggled to service that market segment due to a variety of factors including construction and land costs, zoning regulations and financing.

“My gut tells me there is a solution,” said Gokhman.

He said Quartet is an example of trying to reach that “aggressive price point” with a newly-constructed building. The strategy includes reducing the number of on-site amenities (no pools or large club rooms) and finding the right balance for the scale of the building. “I think we were able to do it at Quartet,” said the developer. “We were able to build an aesthetically and design-oriented building at an affordable price point.” One-bedroom units rent for between $1,200 to $1,300 per month, with two-bedrooms starting at $1,500.

Based on the market response, Gokhman might have hit the sweet spot. Quartet was fully leased by the end of July.

In addition to its new buildings, New Land has also acquired a number of apartment buildings on the East Side over the past two decades that are affordable primarily because of their age. But Walker’s Point offers far fewer pre-World War II apartment buildings. It does have a scattering of vacant lots that New Land has found attractive to develop. “We love Walker’s Point,” said Gokhman.

Gokhman said part of the draw to the site is the road diet applied to S. 5th St. The city, in 2018, narrowed the roadway and expanded the sidewalks. “The remake of 5th Street, honestly, that should be the recipe,” said Gokhman of future street projects. For more on the changes, see our coverage from 2018.

To facilitate Element’s construction, a zoning variance request is pending before the city’s Board of Zoning Appeals. The variance would accommodate an almost 70-foot-tall, six-story building with up to 66 units, the height and density of which exceed those of the city’s Industrial-Mixed zoning designation for the site.

The building also needs a variance for glazing requirements. It does not meet the 60 percent requirement for S. 5th St. and is instead proposed to be 25 percent glazing (windows). But for W. Mineral St., the building’s secondary facade, the requirement is 15 percent and the design proposal includes 59 percent glazing. The first two floors of the building would be occupied by a parking garage and a 1,211-square-foot commercial space. A 1,400-square-foot patio would be created in the 23-foot setback from W. Mineral St.

Historic aerial images show much of the lot was clear by 1971, with the lot entirely cleared of any structures by 1981. Going back to the 1910 Sanborn insurance maps of the city, when S. 5th St. was then Grove Street, the lot was covered by a series of wood structures with commerical uses. 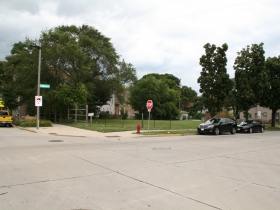 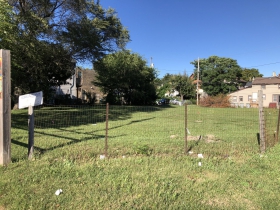 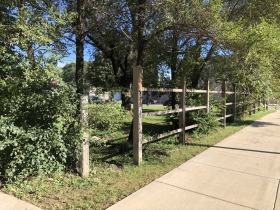 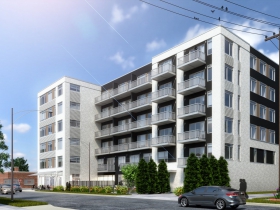 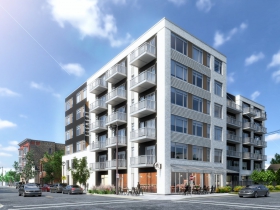 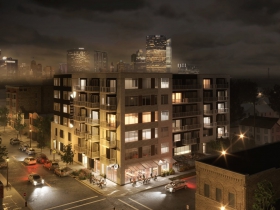 A community boatyard at 201 N. Emmber Ln. in the Menomonee Valley was renovated this month. All Hands Boatworks, a 501(c)(3) non-profit organization, operates the boatyard on the Menomonee River through an easement with the City of Milwaukee.

The organization, led by founder Bill Nimke, teaches K-12 students through hands-on projects centered around building wood boats. Since its 2013 founding, the program has engaged over 2,800 students in 110 boatbuilding projects.

The Herzfeld Foundation provided a $25,000 grant for the renovation, which includes building a permanent gambrel roof between two shipping containers that store equipment. KPH Construction is building the new roof.

The International Union of Painters and Allied Trades is helping coordinate volunteers. PPG is donating all paint and supplies to paint the shipping containers. Containers Up is also providing assistance.

A focused community build weekend was held earlier this month. 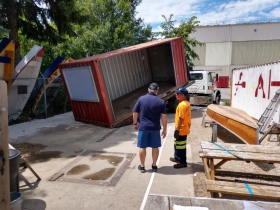 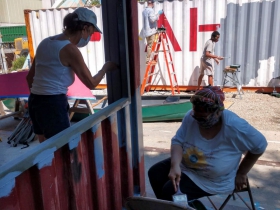 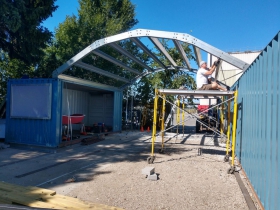 “It was all part of the plan,” says Michael Emem, explaining how he’s gone from designing houses while in high school at Bradley Tech to building them for clients.

We met at 1509 N. Jefferson St., one of many development projects Emem increasingly finds himself involved in.

The Lower East Side project, a three-story, $700,000 duplex, has Emem serving as the designer and builder for the property owner.

His firm, Emem Group, has also designed the homes planned for two urban infill subdivisions the city created, Josey Heights and Walnut Circle. Emem says he’s currently working with six prospective buyers. “I would expect to be in the ground this fall,” he says of building new homes at the sites.

A 138-year-old Walker’s Point building is getting a new lease on life as a market-rate apartment building under a plan by developer Michael Morrison.

Having started construction in 2018, Morrison is finally approaching the finish line for his building. When it does, there will be 12 apartments on the upper floors and an event venue on the first floor. The basement would contain a tavern connected with the event venue.

The cornice of the building gives its name as National Block, but it’s probably easier found by its address – 425 W. National Ave.

The three-story building was long used as a rooming house, but the prior owners faced a raze order from the city in 2016. Morrison, who relocated to the neighborhood in recent years, was able to save the building from the wrecking ball by purchasing it and introducing a plan to aggressively rebuild the structure.

Doors Open 2020 Will Be Virtual Event

The 10th annual Doors Open Milwaukee won’t look anything like the events that preceded it.

The event would normally feature approximately 150 buildings opening their doors to tens of thousands of visitors over a late September weekend. The most popular sites regularly draw lines and have people crammed into elevators and other small spaces as they tour everything from Northwestern Mutual Tower to the Schuster Mansion Bed & Breakfast.

But with the COVID-19 pandemic, crowds, particularly in small spaces, are a no go. What to do? Go virtual.

The new owner of much of the N. Downer Ave. commercial corridor is looking to replace a vacant, fire-damaged home just north of its holdings.

An affiliate of Seattle-based Bridge33 Capital acquired the buildings at 2551-2597 N. Downer Ave. and 2608-2650 N. Downer Ave. in early April for $11.25 million. The addresses for these properties include buildings occupied by the Downer Theatre, Boswell Book Company, Cafe Hollander, Starbucks, Stone Creek Coffee and Pizza Man.

Now it aims to expands its holdings northward.

Bridge33 Capital proposes to buy the building at 2604 E. Park Pl. and make a $1 million investment in redeveloping the property.

Victory Over Violence Park Being Reinvigorated

A park situated in the middle of one of Milwaukee’s historic commercial corridors will see new life under a plan from the King Drive Business Improvement District and City of Milwaukee.

Victory Over Violence Park was created in the 1990s from a vacant lot that had become a magnet for violence and illicit activity. Its creation was championed by the late Jeannetta Simpson-Robinson, cofounder of Career Youth Development (CYD), which was formerly located in a building adjacent to the park. In recent years the park has fallen into disrepair and the one-time home of CYD is now vacant.

“We are bringing the park back to a nice community space,” said King Drive BID executive director Deshea Agee in an interview. He said the park plays an important role on N. Martin Luther King Jr. Dr. because there are few public green spaces along the commercial corridor.

The short-staffed agencies have since answered hundreds of calls and sifted through thousands of applications. Sometimes applicants get help quickly, but others wait more than three weeks for rent aid to be processed.

Meanwhile, eviction filings are flooding courts, especially in Milwaukee. City landlords filed 1,447 evictions in June, a 17% increase compared to pre-pandemic monthly averages. One study estimates more than 27% of Wisconsin renters are unable to pay rent and are at risk of eviction.

Read the full article from the Wisconsin Center for Investigative Journalism