By Melanie Conklin, Wisconsin Examiner - Aug 25th, 2020 01:51 pm
Get a daily rundown of the top stories on Urban Milwaukee 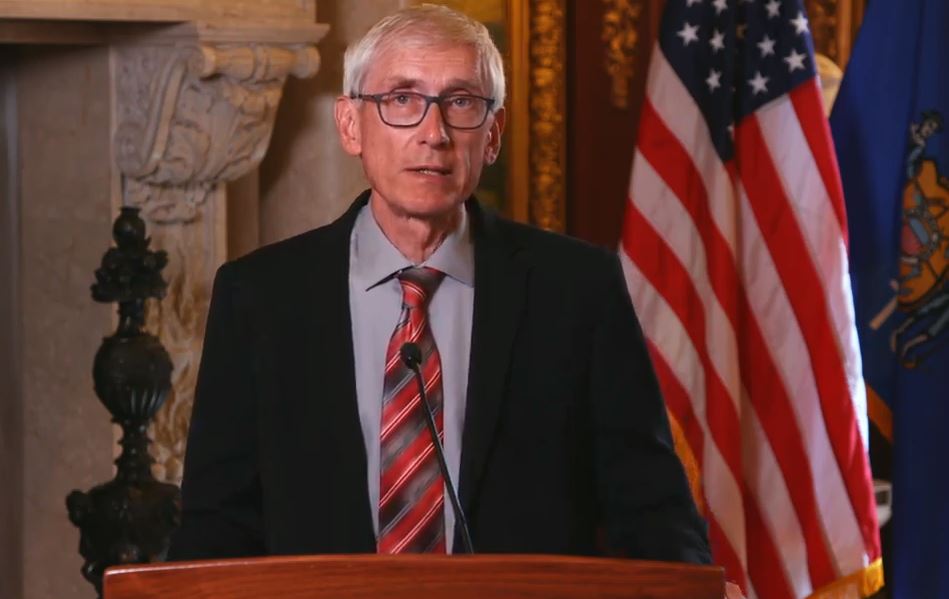 Gov. Tony Evers. Screenshot from 8/24/20 statement regarding Jacob Blake, who was shot in the back by Kenosha police on Sunday/Wisconsin Examiner.

Saying that we must “rise to this moment,” Gov. Tony Evers is calling the Legislature in for a special session next week to take up legislation tied to racial injustice and policing reforms from a package of bills he worked on with the Black Legislative Caucus and unveiled over two months ago.

“These are common sense policies that transcend political debate,” Evers said, adding that many states — including neighboring states of Iowa and Minnesota — have passed similar comprehensive police reform legislation. That series of bills have been ignored by the GOP, which has not been in session since April.

He has called for the session to take place Monday, Aug. 31st at noon.

“Like many of you, the video is etched into my mind, like so many other past videos that are just like it,” said Lt. Gov. Mandela Barnes. “And now we all know Jacob Blake’s name.”

Evers expressed his frustration with the lack of legislative action — which GOP leaders have been saying will not happen until after the election, at the earliest.

As is frequently the case, Evers and Speaker Robin Vos (R-Rochester) were both critical of the other’s action.

“Two months later and Wisconsin’s legislative leaders have failed to act,” said Evers. “This movement has touched every corner of Wisconsin. Frankly, I should not need to call a special session, but people across our state from streets from my small hometown of Plymouth to the streets of Milwaukee are demanding their elected leaders take action.”

Evers said he had spoken with Vos and left a message for Senate Majority Leader Scott Fitzgerald (R-Juneau). A short time before Evers and Barnes’ conversation with the media, Vos announced he would be forming a task force on racial disparities, policing standards, education and other issues.

In general, a task force holds meetings and gathers information from people invited to testify and may take public comment. Most of the task forces convened by the speaker have submitted a report and potential legislation after months of meetings.A special session is called by the governor, or the Legislature may call itself into an extraordinary session, to focus on a specific issue laid out in the “call” for the session. Those bills could be voted up or down during the session and those that pass sent to the governor’s desk to become law.

Vos, however, seemed to take Evers’ calling the Legislature in for a special session after he had called for a task force as a betrayal of their discussion.

“One hour after the announcement of the speaker’s task force, Governor Evers releases a Special Session call of the Legislature,” Vos said in a statement. “When I spoke to Governor Evers on the phone today, I asked him to work with the Legislature in a deliberate and open process through the task force. We have an opportunity to bring people together to find solutions. Instead, the governor is choosing to turn to politics again by dictating liberal policies that will only deepen the divisions in our state.”

Evers said he “could not wait for Wisconsin legislative leadership to show up.” He pointed out that bills that have come from several of the past task forces the speaker had convened had never even gotten through the Legislature before the session ended in spring.

Lt. Gov. Mandela Barnes offered a strong response when asked by Wisconsin Examiner for his opinion on the idea of Vos’ task force.

“This is another abdication of responsibility,” said Barnes. “Racial injustice in this state existed long before Robin Vos was the Assembly speaker. So, for him to justify right now as the time to hold a task force shows [that] once again he is late to the party.”

Evers admitted that Vos did not appear to want to hold a special session, saying “in general, he seemed to be unmoved by my request.” But he did not respond to what steps he might take if Republican leaders in the Legislature gaveled in — and then immediately gaveled out — a special session, as they did when Evers ordered other special sessions. Past topics included gun control, education and assisting farmers.

“We’ll do whatever we can,” said Evers, saying the executive branch and legislative branch need to work together on the list of bills he proposed.

“I want to be clear, this is not the time for politics. I’m urging Republican leadership to rise to this important moment in history. To put people before politics and the lives of Black Wisconsinites above politics and give this special session the urgent and productive effort that this moment demands and that the people of Wisconsin deserve.”

The list of bills introduced by Evers and Barnes in June that they have put on the agenda for the special session, with links to the legislation can be found here.