By Isiah Holmes, Wisconsin Examiner - Aug 19th, 2020 03:04 pm
Get a daily rundown of the top stories on Urban Milwaukee 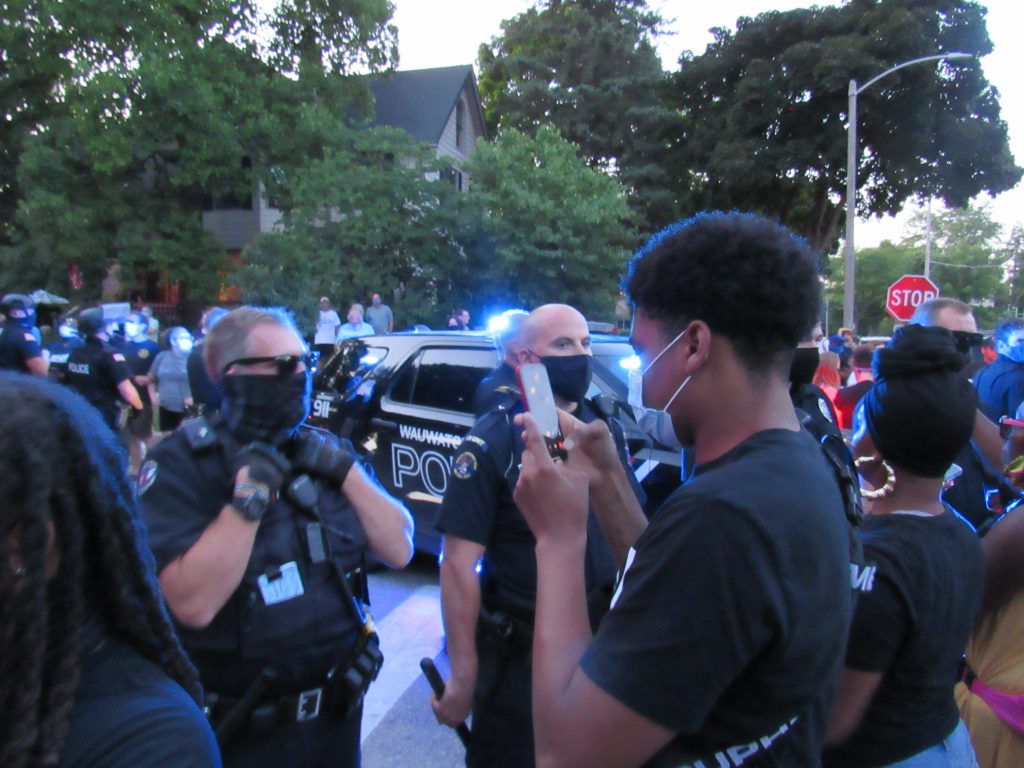 Wauwatosa officers confront protesters in the days after the incident at Mensah’s house. Photo by Isiah Holmes/Wisconsin Examiner.

On Aug. 14, the Wauwatosa police made one of their first arrests of a Black Lives Matter protester after weeks of sustained protests in the Milwaukee County suburb. Protesters had started in Milwaukee, and marched down Wells Street to cross into Wauwatosa. Police confronted the marchers as they reached the city limits.

On Aetna St. in a tightly packed neighborhood with narrow streets a marked Wauwatosa squad blocked the intersection as the protesters arrived and police jumped out to arrest a single bicyclist who was scouting the route for the marchers.

An hours-long standoff followed between police and protesters, who call themselves the  People’s Revolution. Although many people livestreamed the arrest, few saw or documented the events leading up to it.

Reporters from local stations, including FOX 6, conducted interviews after the police presence escalated into a riot shield formation.

Wisconsin Examiner posted a 30-minute video from that evening that shows the arrest, the events leading up to it, and what followed. Here are a few key moments in the video:

First three minutes: Marchers with the People’s Revolution faction of Milwaukee’s protests prepare to march on Wauwatosa. The march was peaceful, and drew supportive neighbors outside as it went down Wells Street into Wauwatosa.

3:28: The scout team has its first encounter with an unmarked Wauwatosa squad car and a lieutenant who warned that if traffic was blocked, specific arrests would be made.

6:00: The unmarked Wauwatosa squad squeezes a contracted security car which has helped direct traffic and communicate with police over the weeks of protest.

6:32: Protesters wait for Wauwatosa officers to cross the street, as traffic backs up. Residents who are caught behind the police barricade finally reverse and go back the way they came one at a time. The officers do not move.

7:24: A marked Wauwatosa squad blocks the march from continuing, and police arrest a single protester.

10:00: More Wauwatosa police show up. Some begin pushing protesters, and telling them to stay back. State Rep. Jonathan Brostoff (D-Milwaukee) was also pushed as he livestreamed.

10:36: The police lieutenant speaks with Khalil Coleman, a lead organizer. The officer claims that as soon as protesters stop blocking traffic, they will be allowed to continue.

15:38: Coleman relays what he was told by officers.

16:57: Officers get out more riot equipment even though the situation has not escalated and there is no property damage, injuries, or vandalism.

19:26: The police lieutenant speaks with Tiffany Henry, president of the Milwaukee League of Young Professionals.

22:36: More riot police from numerous suburban departments and agencies respond in  riot gear, holding a line. Kimberley Motley, a lawyer representing the families of those Officer Joseph Mensah has killed, arrives on the scene.

28:28: The officers retreat a step at a time, with Motley holding her ground. Marchers are  then able to leave the area, and continue their march unbothered. The protester was released by the time the group made its way to the other end of Wauwatosa at Mayfair Mall.