By Isiah Holmes, Wisconsin Examiner - Jul 9th, 2020 03:06 pm
Get a daily rundown of the top stories on Urban Milwaukee 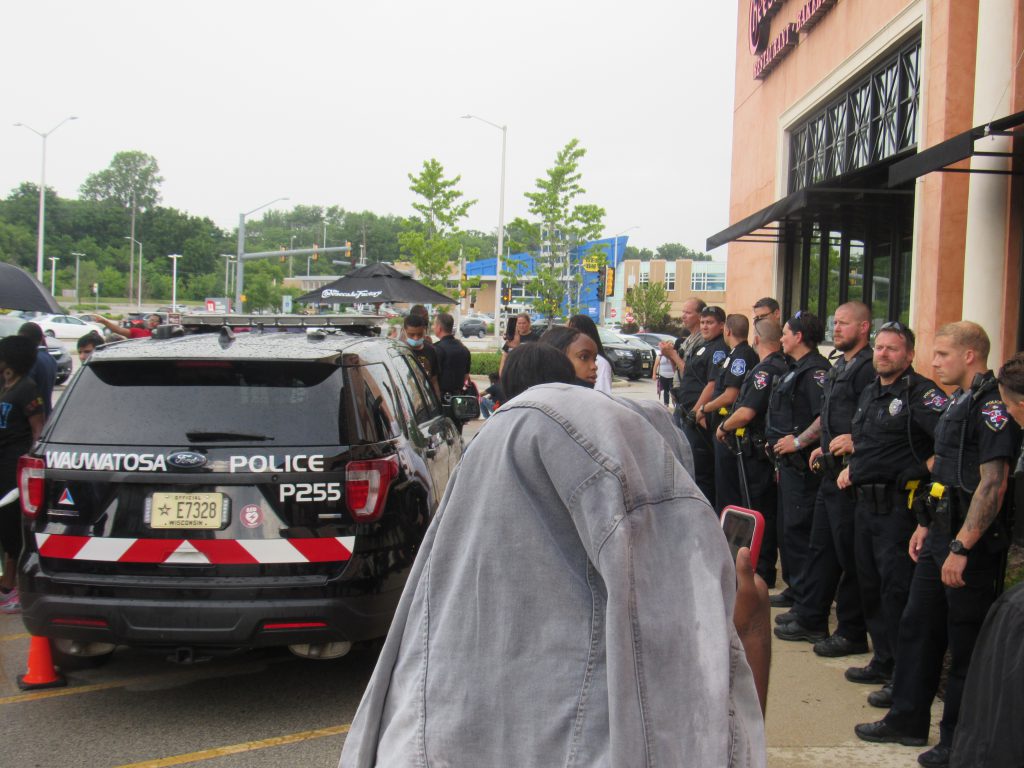 Pressure continues to mount on the Wauwatosa Police Department (WPD), and the city as a whole, to fire an officer who has fatally shot three people since 2015. Officer Joseph Mensah has been off the street, but still on the payroll, since shooting 17-year-old Alvin Cole in February. As protests triggered by the death of George Floyd in Minnesota spread across the globe, Cole’s family broke the silence they had held for months.

Now, their case has garnered the attention and support of big celebrity names. Late last week Roc Nation, a social justice organization founded by rapper and hip hop mogul Jay-Z, took out a full-page open letter to District Attorney John Chisholm in the Milwaukee Journal Sentinel. It called for Mensah to be fired and began with a question: “How many more people must die at the hands of Officer Joseph Mensah?”

Cole was killed after he and friends were allegedly involved in a disturbance at Mayfair Mall. By the time officers arrived, Cole and his friends had already attempted to flee. Police say that Cole fired a single shot at officers before Mensah shot the teen four times. One of the family’s lawyers, Kimberley Motley, recently sent Chrisholm a letter which was not circulated in public, laying out the evidence as she sees it.

In the letter, she explains in detail how Cole was shot on his hands and knees, after already having surrendered to police. The shooting occurred after Cole followed police officers’ orders and discarded a weapon in his possession, which then discharged and grazed Cole’s arm. Mensah was the last officer on the scene, the only one to fire and was behind Cole. He waited 10 seconds after he heard the shot before firing his service weapon.

In recent weeks protests in support of the Cole family have grown in size, and the attention on Tosa PD has mounted. Motley is also representing the families of 25-year-old Jay Anderson, Jr., and 28-year-old Antonio Gonzales, who were both killed by Mensah during his first year at WPD. Gonzales, Mensah’s first shooting, was killed in 2015 after officers responded to a call about a man walking around his house with a sword. Mensah was still in his probationary period at WPD, where new officers can be quickly fired for mistakes.

Anderson was killed 11 months later, after Mensah claimed Anderson reached for a gun on his seat. Mensah, however, claims he interacted with Anderson for several minutes before noticing the gun. Officers who arrived at the scene removed the gun from the car without taking pictures for evidence. And, unlike Cole’s shooting, Anderson’s case garnered very little media attention.

Shortly after Jay-Z’s group issued the open letter and posted it on social media, other celebrities followed suit. The Jonas Brothers were among the first big names to start retweeting Mensah’s name, then came rapper Meek Mill. Others have followed suit, and the small suburban department has been discussed on large media platforms like TMZ and others.

Teleavia Cole, Alvin’s older sister, told Wisconsin Examiner that she was ecstatic to wake up to the news of Roc Nation’s support. “We worked hard to get this out there,” said Cole. “Reaching out to people, just continuing to share the story. Continuing to get out here, on the news, every day. And it’s tough for us, for sure. But it’s necessary.”

In the weeks since the Cole family began protesting, WPD has changed its use of force policy regarding chokeholds, and the city is moving to equip all officers with body cameras. In all of Mensah’s shootings, the lack of video has made it difficult for lawyers and investigators to fully understand what occurred. Cole’s case is being investigated by the Milwaukee Police Department (MPD). Over the last seven years, Mensah has been the only Tosa officer who’s been responsible for fatal shootings.

Tosa PD goes on the offensive

For the most part, WPD lightly monitored the Cole family’s demonstrations, which would often center around Mayfair Mall. Learning of Jay-Z’s support the morning of July 2 was a morale boost for the Coles, but it did not change their plans to hold another demonstration. That day, marchers flooded Mayfair’s Cheesecake Factory, a short distance from where Cole was killed. For nearly an hour they shut down the restaurant, using loudspeakers inside to talk about the case, and the families’ experiences.

Some customers were supportive, or shocked to learn of the suburban officer. Others left after it was clear the protesters weren’t going anywhere soon. A group of elderly white residents were the first to leave with one woman, vacationing from Texas, verbally sparring with the protesters. She demanded to be allowed to eat her gourmet cake in peace. The marchers countered that Tracy Cole, Alvin’s mother, has had trouble eating, sleeping and generally functioning day to day since losing her son. Some of the woman’s friends expressed sympathy for the marchers’ cause.

Tosa officers, in marked and unmarked vehicles, monitored the action from a distance but did nothing. That all would change the next time a protest for Cole, Anderson and Gonzales — who have been given the moniker “the three” — came to the restaurant on July 7. Before arriving, the Cole family said they received a call from a WPD captain.

Wisconsin Examiner that she felt the call was an intimidation tactic. “He said, ‘you better watch your back,’” recalled Cole. The Wauwatosa Police Department did not respond to repeated requests for comment from the Wisconsin Examiner on the phone call, and on any evidence of violence at Mayfair protests.

When the family arrived at the Cheesecake Factory, thick raindrops were producing a dramatic downpour as they were met with a legion of police. WPD, Milwaukee County Sheriff’s Department personnel, Brookfield police and others were already there. When marchers moved to shut down the Cheesecake Factory, officers went in and began grabbing and detaining people.

Tristiana Cole, also Alvin’s sister, was one of the people tackled by police. “He was rushing everybody out of the Cheesecake Factory,” she says, “and he tackled me down. We were just doing a normal protest, and they just came out the blue and said they were going to arrest us. And everyone was bum-rushed out the door.” She was left bruised and scraped from the encounter.

Even as protesters were let go and the marchers lingered in the parking lot, officers gathered to discuss their next moves. Some wore militarized body armor with camouflage print. Completely blacked-out undercover vehicles made up a noticeable chunk of the police response.

From there, marchers went to the Wauwatosa City Hall, where a city council meeting was underway. Marchers took over the meeting, shouting down Mayor Dennis McBride for not taking up meeting topics which involved Mensah and the department.

McBride argued, however, that the council was confined to the restrictions of Wisconsin state law, and they needed to get through their planned agenda. He also added that the city council does not have authority over the police department, the purview of the Police and Fire Commission. Eventually, McBride moved to approve the motions of that evening without discussion, and adjourned the meeting.

Despite these recent escalations, the Cole family and their allies — the Andersons and Gonzaleses among them — are not slowing down. Next week, the Wauwatosa Police and Fire Commission will be having a public meeting regarding a complaint filed against Mensah by Motley and her law firm. The activists will be there as well, ready to make their voices heard.