By Isiah Holmes, Wisconsin Examiner - Jul 2nd, 2020 01:12 pm
Get a daily rundown of the top stories on Urban Milwaukee 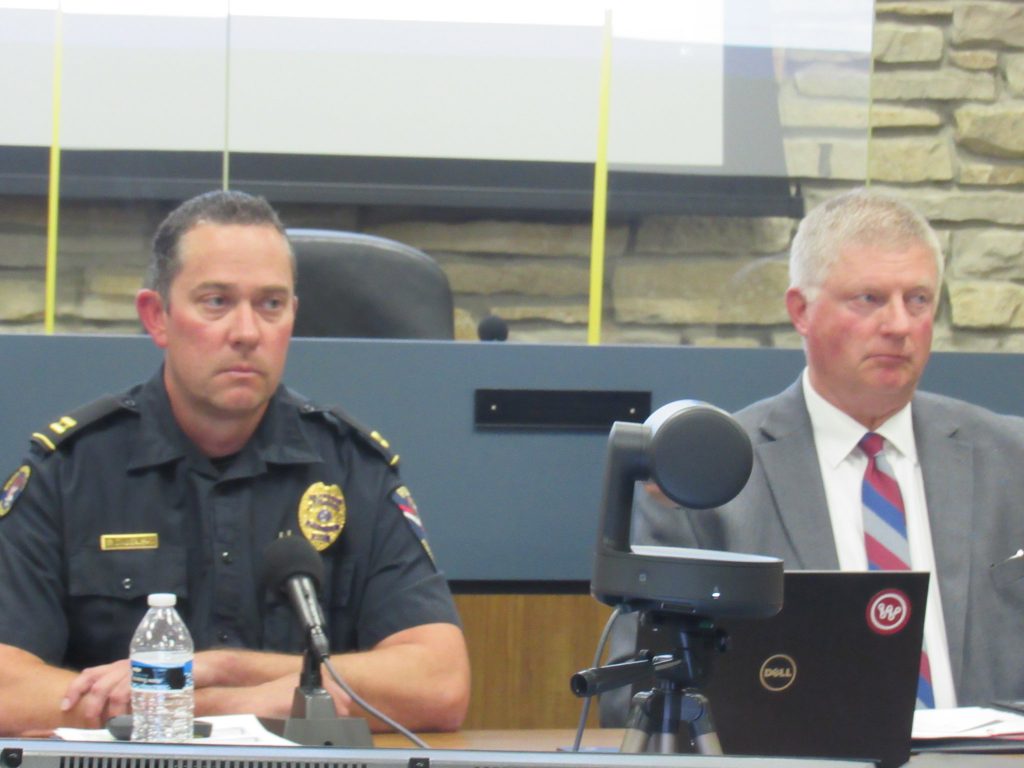 Activist and community pressure on the Wauwatosa Police Department (WPD) is translating into real policy change for the department. From June 29-30, the Wauwatosa Committee of the Whole held meetings regarding the implementation of body cameras for all Wauwatosa officers. Though public comment was not allowed, locals packed Wauwatosa’s City Hall the evening of June 29 to ensure their voices were heard.

The families of 25-year-old Jay Anderson, Jr. and 17-year-old Alvin Cole were there. Anderson, Cole and 28-year-old Antonio Gonzales were all killed by the same Wauwatosa officer, Joseph Mensah, during a five-year period. Cole, the most recent fatality, was killed by Mensah at Mayfair Mall in February, after a foot chase. The teen and his friends were allegedly involved in a disturbance at Mayfair Mall, and responding officers were warned one of them might be armed. 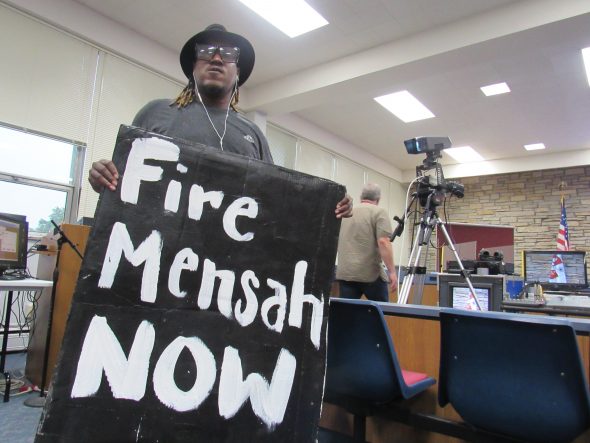 Protesters gather at Wauwatosa’s City Hall. They called for the firing of Officer Joseph Mensah, but also for the implementation of body cameras at the police department. Photo by Isiah Holmes/Wisconsin Examiner.

Cole’s family members and their lawyer Kimberley Motley say Cole had already surrendered, and was shot while on his hands and knees. Officers say Cole fired a single shot at officers, but Motley asserted a different narrative based on the emerging evidence, which she detailed in a letter she recently sent to District Attorney John Chisholm.

“Alvin ran about .3 of a mile before he was shot,” it reads. “While running, he was told by a police officer to ‘drop the gun.’ The evidence supports the conclusion that Alvin was trying to drop the gun. We all agree that Alvin appears to try to throw his gun away and while doing so his gun — which only has one bullet in the chamber and no magazine clip in it — went off. The bullet hit his left arm and he was grazed by the gunshot which the Medical Examiner’s Office confirmed occurred at a fairly close (intermediate) range.”

Mensah was the last of several officers to arrive, but the only one who shot. The letter notes that the officer “shot Alvin 10 seconds after Alvin’s gun went off. Ten seconds. Mensah stated he heard the gunshot, never saw the flash, didn’t see the muzzle of the gun, and did not know who fired that shot.”

The gun Cole had in his fanny pack was empty and on the ground before he was shot, Motley’s letter states. Mensah fired five shots, missing only once while Cole was, “on his knees with one hand on the ground and Mensah was behind him,” the letter states. Four years earlier, Anderson was shot six times. Gonzalez was shot eight times less than a year before Anderson. Mensah was not wearing a body camera during any of the shootings. Wauwatosa officers not assigned to the motorcycle patrol do not use body cameras — a situation addressed at the June 29 meeting.

A tense and emotional city meeting

The June 29 meeting gave WPD an opportunity to present information about the cameras, including budget concerns and technical considerations, to the public and the common council. Two brands of body camera, Panasonic and Axon, were proposed by WPD Captain Brian Zalewski, who sat beside Chief Barry Weber.

One of the first things WPD must consider is whether it wants to purchase the same brand of cameras it already has, or replace its entire system. WPD already has Panasonic body cameras which, unlike Axon, do not have a cloud footage storage option. The Axon brand cameras sync up with dash cameras through Bluetooth, which is a plus. However, that would mean all the squad dash cameras would also need to be replaced. Axon’s body cameras can also use Bluetooth to activate automatically within 30 to 50 feet of a fellow squad in the event back-up is called.

Axon camera equipment for the entire force would carry a price tag of over $450,000 for Wauwatosa with all the software and warranties. Panasonic, on the other hand, would cost around $249,000 for the body and squad equipment alone. These prices are estimates, and would be budgeted over roughly five years.

Whereas nine nearby departments including those of Butler, Shorewood, Germantown, Whitefish Bay and Brookfield all use Axon, just the Greenfield and Racine police use Panasonic. Captain Zalewski noted that WPD is hoping to learn from other departments about best practices with body cameras. Recently passed body camera legislation also helped to build a framework policy for the devices’ use.

By the end of the presentation, members of the Common Council appeared eager to move the proposals along. Wauwatosa Ald. Matt Stippich (Dist. 1) was the first to speak out, going as far as to set a six-month deadline by which the new body cameras should be implemented. There was no vote on the agenda, but Stippich said, “I think it’s important for us to be taking a vote,” as audience members cheered.

“We’ve been talking about this for several years,” said Stippich, “and trying to push along some ideas. I know we’ve made some efforts with the pilot program, but the time is now.” Ald. Craig Wilson (Dist. 8) seconded Stippich’s motion to set the six-month goal, and move the body camera issue forward. Wilson noted the importance of not “stopping the issue at ‘can we afford it?’” One by one, the attending alders voiced their support, and the motion passed unanimously.

After the June 29 meeting concluded, the audience, including many protesters and the families of Anderson and Cole, was ecstatic. Motley called the result “a very good first step” to enact swift policy change within WPD.

“But we just need to make sure that they stick to that,” Motley told Wisconsin Examiner. Ideally, “by December 29, they [all 92 Wauwatosa officers] should be wearing body cameras. No ifs, ands, or buts about it. And so we’ll see. I think it was a really good, positive first step. We just got to hold their feet to the fire … because this should’ve been done a long time ago.”

Wauwatosa Ald. Heather Kuhl (Dist. 5) was also happy to see the unanimous decision from the city body. “I’m really hoping that the council is seizing this moment to really move forward and I’m excited to be part of this change.” Kuhl, who was elected in 2018, has had her own debates with the department and its chief. 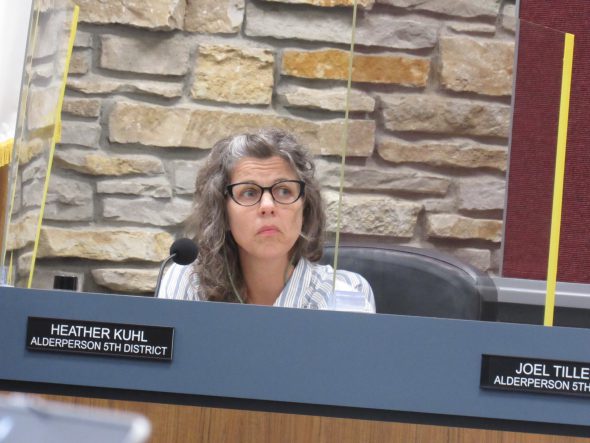 In 2018, she proposed a resolution to ensure that a majority vote by the common council would be required if the department intended to cooperate with Immigration and Customs Enforcement (ICE). At the time, WPD’s exact relationship with the federal deportation force wasn’t entirely clear. Some also inaccurately described the resolution as making Wauwatosa a “sanctuary city,” which provoked fear and concern among many residents.

Chief Weber warned publicly that even if a resolution passed, “if I get someone who I think is guilty of a serious crime and they’re undocumented, I’m not following the ordinance.” Weber also expressed his concerns related to the “trending demand” of body cameras in 2014. Now, in 2020 Weber, who’s been WPD chief since the late 1980s, is more open to body cameras.

Kuhl highlighted the importance of large crowds attending the council meetings, even if public comment isn’t allowed. “The physical presence of all these people makes a huge difference. It just changes the dynamic, changes the tone, it changes the direction. Have people here for public comment,” she urged.

Frank Nitty, a lead activist and organizer for Milwaukee’s Black Lives Matter movement, was also in the attendance. Although Nitty thought the meeting went well, he did have some concerns. “I’m kind of concerned that they want the most expensive cameras right away,” Nitty told Wisconsin Examiner. “That sometimes creates hurdles on purpose. So if they’re aggressively trying to get the most expensive cameras, I can take that as a win. But if it becomes like a stall and it takes a couple of years to change the whole system out, then that’s not a win.”

Nitty is torn between the idea of expanding Wauwatosa PD’s existing camera system, or replacing the entire thing with Axon. Body cameras add transparency but aren’t the end-all-be-all. “Body cameras are a small win,” he said, “we need them for transparency, but it’s not a real win. We get killed on camera every day.” Motley echoed that, but grounded the point in the situation around Officer Mensah. “Every day that he remains on the force, Wauwatosa loses credibility,” she said. Motley, the families of those Mensah shot and local activists are calling for Mensah to be fired.

“It’s a good first step,” Jay Sr., Anderson’s father, told Wisconsin Examiner, standing beside his wife Linda. “We got a lot of work to do,” Linda added, “we got to get Mensah off the force.” Jay Sr. stressed, “He’s killed three people in five years. That’s a problem. Justified or not, nobody deserves to die.” Tracy Cole, the mother of Alvin Cole, was also watching alongside her daughter and other loved ones. “I feel like a whole burden was lifted off of my chest,” Cole told Wisconsin Examiner. “I feel that one thing is accomplished, now we have to get the others. To get Joseph fired, and to get Chief Weber fired.”

Following the meeting, Chief Weber disappeared into a back room where over 10 Wauwatosa officers waited for him. The personnel were presumably there for Weber’s security, and cleared most people from City Hall after the meeting concluded. Once outside, as the families spoke with the media, at least 11 marked and unmarked Wauwatosa squad cars waited on a distant corner of the parking lot. Protesters blocked a driveway where Weber’s vehicle was set to exit.

Once protesters cleared the driveway, Weber left, along with his convoy which made up about 11% of WPD’s overall force. Later that evening Motley and the Anderson and Cole families met with Weber and Zalewski privately at the station. Motley said the meeting went well, and added that more developments are sure to come as the weeks unfold.