By Isiah Holmes, Wisconsin Examiner - Jun 9th, 2020 01:34 pm
Get a daily rundown of the top stories on Urban Milwaukee 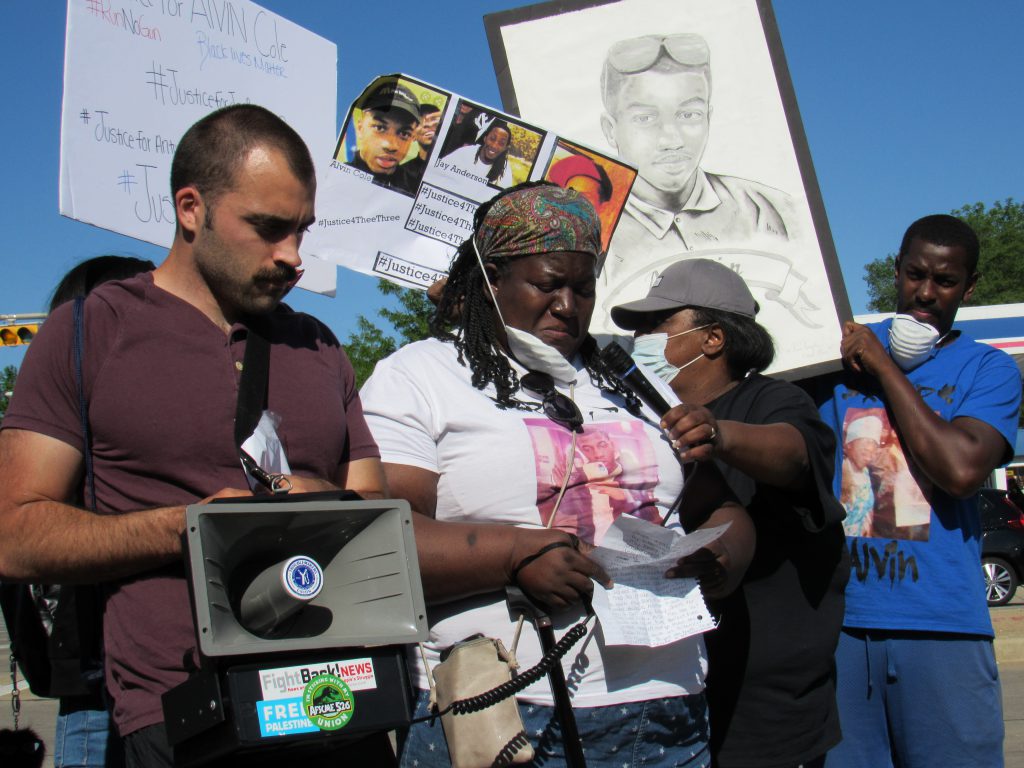 “Alvin was my youngest boy,” Tracy Cole said before a growing crowd of protesters near Wauwatosa on Saturday. Standing in the afternoon heat, Cole struggled to keep the tears and grief at bay, even as the crowd showed its support. “Especially a mother, when you lose a child,” Cole said, “it takes a part of her away.”

On February 2, security at Mayfair Mall contacted the police about a disturbance involving several people. They believed that one of the people involved had a handgun. When police officers arrived, 17-year-old Alvin Cole and others ran away. In subsequent press conferences, the Wauwatosa Police Department (WPD) said Cole fired a single shot at officers, who responded by shooting the teen. WPD states that a 9mm handgun was recovered from the scene. The Milwaukee Police Department (MPD) is leading the shooting investigation, as departments must request outside agencies to conduct such investigations.

After months of meetings with few updates, however, Cole’s family is refusing to stay silent. The family and their lawyer say the shooting officer was Officer Joseph Mensah. Cole would make Mensah’s third fatal shooting since he arrived at the department in 2015. Following the June 6 protests, WPD Chief Barry Weber released a statement on Mensah’s shootings:

“The Wauwatosa Police Department values human life and safety above all else. All officers receive ongoing extensive training regarding the use of deadly force,” said Weber. “In each of the cases involving Officer Mensah, those Mensah encountered were armed with weapons. Each incident happened very quickly and verbal commands were given and not complied with. He defended himself with deadly force.” 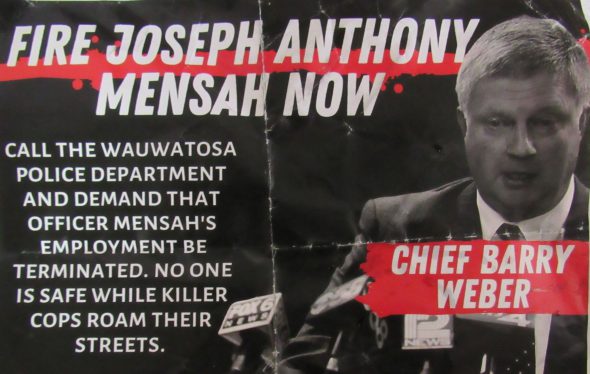 A flier circulated at the Cole rally asking that Officer Mensah be fired by Chief Barry Weber. Photo by Isiah Holmes/Wisconsin Examiner.

In July of 2015, Mensah and another officer were involved in the shooting of Antonio Gonzales. The 28-year-old was wielding a sword which he wouldn’t drop when officers arrived. Less than a year later, in 2016, Mensah was alone when he shot 25-year-old Jay Anderson Jr. WPD states that Anderson reached for a gun during his 3 a.m.encounter with Mensah. However, other officers removed the gun from Anderson’s car without taking pictures for evidence. Since Wauwatosa officers don’t have body cameras, footage is limited to squad cams. In Anderson’s case, the footage lasted less than 30 seconds. Saturday’s march drew attention to these cases involving Mensah by using the moniker “The Three.”

Cole’s family says that, based on what they’ve seen in meetings with District Attorney John Chisholm, they don’t believe Alvin fired a gun. His sister, Taleavia Cole, stresses that one of the biggest issues with the investigation is the lack of video from police.

“The reason why this investigation is taking as long as it is,” she said before the gathering of marchers on June 6, “is because they don’t have body cameras. So it’s hard for our lawyers to get all the evidence they need because there’s a lack of video.” In 2014, WPD Chief Weber questioned the usefulness of body cameras, and described calls for reform at that time as “knee jerk.”

Cole’s family has taken up the banner of millions marching around the world for police reform since the Minneapolis killing of George Floyd. They’re demanding that Mensah be fired, that the Wauwatosa Police Department undergo a review of its practices, and that a Civilian Police Accountability Council (CPAC) provide independent oversight of law enforcement. “What do the families of Alvin, Jay and Antonio want?” The grieving yet motivated big sister asked the marchers. “We want the truth.”

Alvin’s family said they reject the narrative which grew after his death that he came from a broken family. In fact, Alvin’s parents have been married for over two decades. His sister and other siblings have all gone to college. Before the incident at Mayfair, his family says Alvin was planning to go to college himself.

“He’s supposed to be coming to college at Jackson State University with my youngest daughter, but that’s at a stop,” his mother said. “Because Joseph stopped it. And I hope you’re listening to me now Joseph, this is not over.” Mrs. Cole went on to say, “and ya’ll [police] need to please stop bugging my phone. And watching me.”

Cole’s family says that since Alvin was killed, they have been subjected to different forms of surveillance. Unmarked cars park on their street, and their phones have not been working properly, they say, which makes them believe they are being subjected to electronic interference. Both Tracy and Taleavia described their cell phones powering on and off unprompted, difficulty sending and receiving calls and text messages, dropped calls and calls where it sounds as if another person has dropped into the call.

Jay Anderson’s family reported the same set of problems with their phones, which they also believe to be caused by police surveillance. Jay Sr. and Linda Anderson say they got used to the feeling of being watched as police would park near their home while Jay’s case was being investigated.

Law enforcement in Milwaukee County have access to technologies which monitor people’s phones and can cause them to malfunction.

The ACLU has created a national map of local police departments that use cell site simulators, including in Wisconsin. In a lawsuit, the group cited a list obtained by privacy activist Mike Katz-Lacabe of 579 investigations in which the Milwaukee Police Department used Stingrays.

Ney adds that “probably the most suspicious sign that an IMSI-catcher has been used is that people have their phones drop from 4G to 2G, especially with carriers that don’t support 2G anymore.” Due to the secrecy surrounding their use, Ney explains “it is difficult to say whether IMSI-catcher surveillance is happening in any particular situation.”

After speaking, and with hundreds of supporters at their back, the family marched from their meeting place down Burleigh Street in Milwaukee. Chanting the now-familiar slogans of the Black Lives Matter movement, as well as the names of those slain by Mensah, they marched down the street to Mayfair Mall.

Walking down Mayfair Road, the marchers could see several marked and unmarked WPD vehicles scattered throughout the vast parking lot. Drones flew overhead, none of which appeared to be operated by the marchers. The group settled near a Cheesecake Factory, chanting their support before dispersing. Many of those same protesters then traveled to Milwaukee’s South Side to join separate marches led by activist Frank Nitty. No police vehicle interacted with the marchers, though they did appear to shadow some groups as they walked back to their cars.