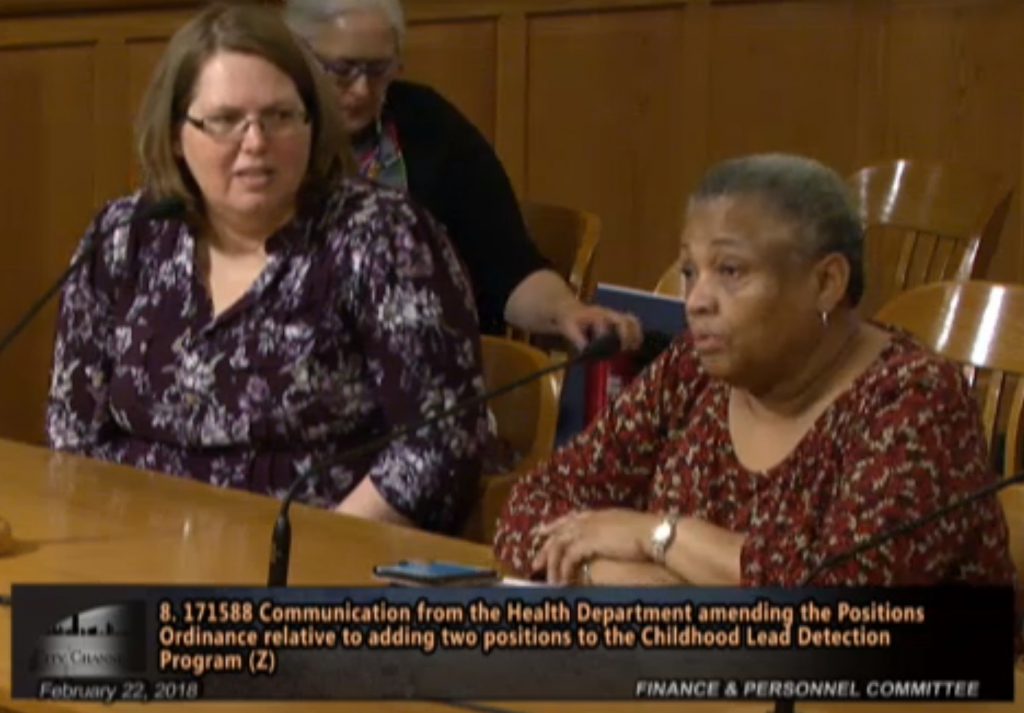 Angela Hagy looks on as Patricia McManus addresses a council committee in February 2018. Image from City of Milwaukee City Channel.

A former Milwaukee Health Department employee secured a $30,000 settlement from the city for racial discrimination and retaliation Tuesday morning. But seven Common Council members objected to the settlement.

The claim wasn’t centered on former Health Commissioner Bevan K. Baker, who resigned in January 2018 over revelations of failures in the childhood lead poisoning prevention program. The claim focused on Baker’s temporary replacement, interim Commissioner Patricia McManus, who is African Americans, and her alleged treatment of Angela Hagy, the plaintiff, who is white.

McManus led the department from February through September 2018 when Jeanette Kowalik was hired as the permanent commissioner. McManus’s tenure started with controversy, including public anti-vaccination comments, and months after it ended she accused Mayor Tom Barrett and Kowalik, an African American, of running “the largest plantation in the north“.

Hagy, who worked for the department from July 2003 until March 2020, regularly appeared before the council during the investigation into the department’s troubles following Baker’s resignation. She served as director of disease control and environmental health from June 2017 to August 2019, which included oversight of the lead poisoning prevention program.

In January 2018, after Baker’s resignation, Hagy authored a report detailing the problems with the childhood lead poisoning prevention program. She was one of two staff members to publicly reveal that Baker had a gag order preventing health department employees from communicating with elected officials. Under Kowalik, Hagy served as the director of data and evaluation, co-authoring a successful application for a $5.6 million federal lead abatement grant.

Hagy now serves as the deputy director of public health in Tarrant County, Texas. Multiple sources close to the issue said in addition to the $30,000 payment, Hagy would receive vacation time reimbursement and a disciplinary letter would be removed from her personnel file.

The council’s Judiciary & Legislation Committee had met about Hagy’s claims in closed session on April 8th and then quickly approved the settlement after returning to public session. She filed the case with the Equal Employment Opportunity Commission and Wisconsin Equal Rights Division.

“The long and short, while I know none of us want to spend any money especially in light of these kinds of issues, the committee felt it would be best to move forward,” said Borkowski on Tuesday when the council took up the matter. “This thing has been dragging for a long time and we can finally put this to bed.” City Attorney Grant Langley, in a March 19th letter, recommended the city settle the claim.

“I object. I would like to see this new City Attorney come in and handle this,” said Ald. Russell W. Stamper, II. “I think her claims are bogus.” Tearman Spencer, an African American, defeated 36-year-incumbent Langley in the April 7th Spring Election.

The measure ultimately passed on an 8-7 vote. Stamper, Nikiya Dodd, Milele A. Coggs, Chantia Lewis, Khalif Rainey, Michael Murphy and Ashanti Hamilton voted against the settlement. Dodd had voted for the settlement at committee, but switched her vote at council. Hamilton appointed McManus after the council rejected Barrett’s interim appointment of Paul Nannis.

Comparatively, it is one of the smaller settlements to draw controversy. The council has approved over $20 million in police misconduct settlements in the past five years.