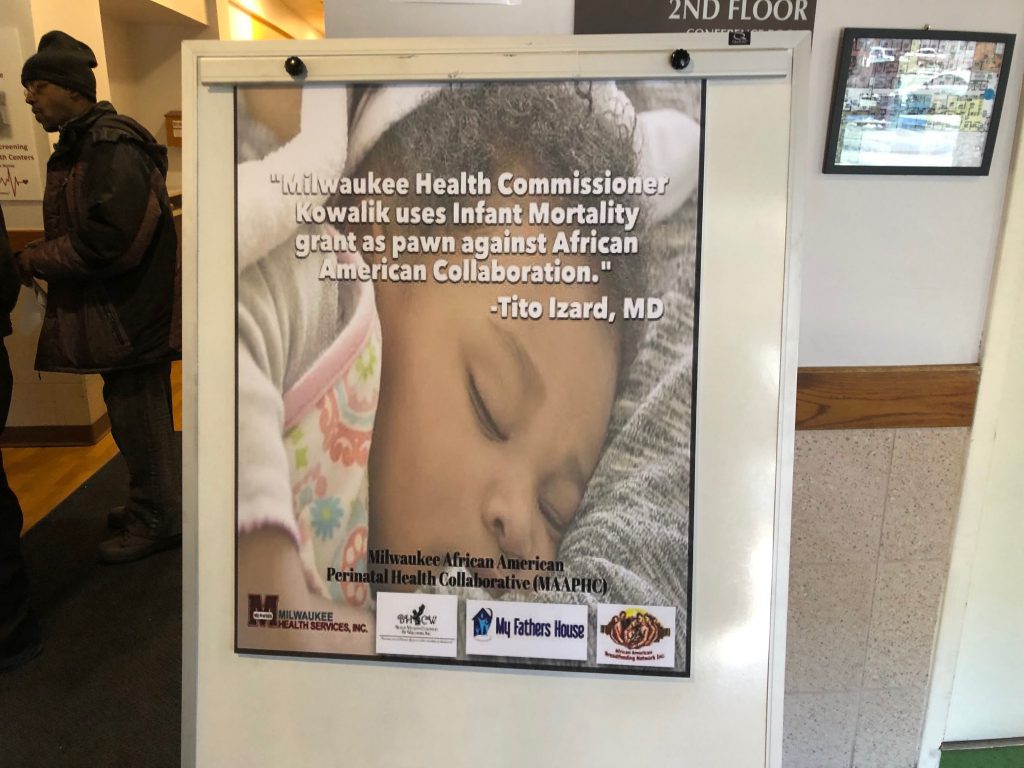 Board on display in Milwaukee Health Services lobby. Photo by Jeramey Jannene.

It should have been good news.

A partnership led by the Children’s Hospital of Wisconsin has won a five-year, $5 million Healthy Start grant to address African-American infant mortality in Milwaukee. A 2017 Milwaukee Health Department study found that black infants died at a rate three times greater than Caucasian infants.

So the news of a multi-million dollar grant award designed to address this striking disparity should have been a cause for celebration. But controversy has arisen because a partnership known as the Milwaukee African American Perinatal Health Collaborative (MAAPHC), submitted a competing bid and lost, despite scoring highly.

“The Mayor and his Health Commissioner have violated our trust,” said Milwaukee Health Services President and CEO Dr. Tito Izard at a two-hour long press conference held Monday afternoon. Izard walked media members and community leaders through a series of emails that he says prove that Barrett and Kowalik supported MAAPHC’s application and then without explaining why to Izard changed course and encouraged CHW to apply for the grant.

Former interim Health Commissioner Patricia McManus, who has long led by the MAAPHC-participating Black Health Coalition, is central to the issue. Izard credits McManus with coming up for the idea to apply. The former commissioner, who stepped down when Kowalik was hired last September, would have served as the project director under MAAPHC’s bid.

Under McManus, the Black Health Coalition lost the same federal grant five years ago, failing to have its grant renewed, and Milwaukee has been without the federal support since. The coalition, under McManus, had received the grant going back to 1998. Losing the grant eliminated a substantial chunk of the organization’s funding. According to federal form 990 tax filings, McManus’s salary dropped from $170,000 to $83,000 from 2014 to 2016.

But Monday McManus said the work continued. “We continue to help our community whether we have the money or not,” said the public health veteran.

She said MAAPHC winning the grant would have represented a chance for capacity building and leadership training for Milwaukee’s African American community, instead, the proceeds will go to the well-established Children’s Hospital of Wisconsin. “Milwaukee is the largest plantation in the north,” said McManus. “If nothing else this is one of the most egregious examples of that.”

Kowalik, an African American, told the Milwaukee Journal Sentinel in advance of the press conference that McManus’s involvement was cause for concern for her and state officials. She also said she contacted Children’s Hospital only when she felt concern that MAAPHC would not finish its application in time.

But Izard, who is calling for a community meeting for Barrett and others to share why they encouraged the hospital to apply and backed away from MAAPHC, said he doesn’t know why the city changed directions. “How is it that there was a concern, but no one asked me?” asked Izard. He also said questions remain on what happened with former Commissioner Bevan K. Baker and his resignation.

“Those who know me know I would not do a press conference to attack anyone,” said Izard. He said he has worked “behind the scenes” for months to resolve the issue, but has not received answers from Kowalik, Barrett or Common Council President Ashanti Hamilton.

Izard spent a good portion of the press conference walking through a chain of emails between MAAPHC and Kowalik, keying in on a stretch in early November. “One of the things that I love that she did is she documented her own circumstance,” said Izard. He said he was forced to remove her from MAAPHC because she was not transparent, citing that in a 12-hour period she went from supporting the MAAPHC’s bid to encouraging Children’s Hospital to submit its own. “How was Commissioner Kowalik able to attend Children’s first meeting within four days with Bob Duncan when she couldn’t find a single time to meet with us in the 30 days she was working with us? We want to know,” said Izard as he ticked off a lengthy list of specific questions illustrating how Kowalik and the city moved to back a different bid.

“Bottom line is I have been ignored,” concluded Izard.

But despite the setback and lingering questions, Izard is happy with his group’s work. “We are very proud of the work done by the collaborative,” said Izard. MAAPHC scored a 96 out of 100 he said, but was notified by the U.S. Health Resources and Services Administration that a competing bid (now known to be the one by Children’s Hospital) outscored theirs.

State senator Lena Taylor was also present at the press conference and backs MAAHPC. “Shame on anyone that put their finger on the scale,” said the senator. “I know it’s not adultery, but it feels like it.”

Taylor criticized the administration of Governor Tony Evers, saying: “I have not seen the type of commitment to the African-American community that I heard on the campaign trail (from Evers).” But Evers’ administration might not be involved. Izard told Urban Milwaukee he does not know the identity of the involved state official or when they contacted Children’s Hospital to support its application. Evers took office in January. He only learned of the state communication during a discussion with CHW head Bob Duncan after the grant award was announced.

Taylor, McManus and Izard also raised concerns about where the money will go. Izard said he wasn’t sure if CHW intends to do much of the work itself or work with partners. A press release from CHW lists the City of Milwaukee Health Department, Children’s Hospital of Wisconsin Community Services, Black Child Development Institute-Milwaukee, Birth in Color Initiative, Easter Seals and “other community stakeholders” as partners on the grant. The three MAAHPC advocates said they are not familiar with some of the groups.

Taylor did succeed in rallying support for action in the room, suggesting that an online petition be started. Among those who responded positively was the Sherman Park activist Vaun Mayes, whose indictment for conspiring to firebomb a police station has created controversy among activists who support him. Speaking of Kowalik, Mayes said: “I think she should resign and we should call for her to resign.”

In response to a request on the matter, Barrett’s office provided a letter dated November 21st that was provided to Izard in support of his application. McManus said at the press conference that similar letters came from Congresswoman Gwen Moore and U.S. Senator Tammy Baldwin.