By Isiah Holmes, Wisconsin Examiner - Feb 6th, 2019 11:49 am
Get a daily rundown of the top stories on Urban Milwaukee 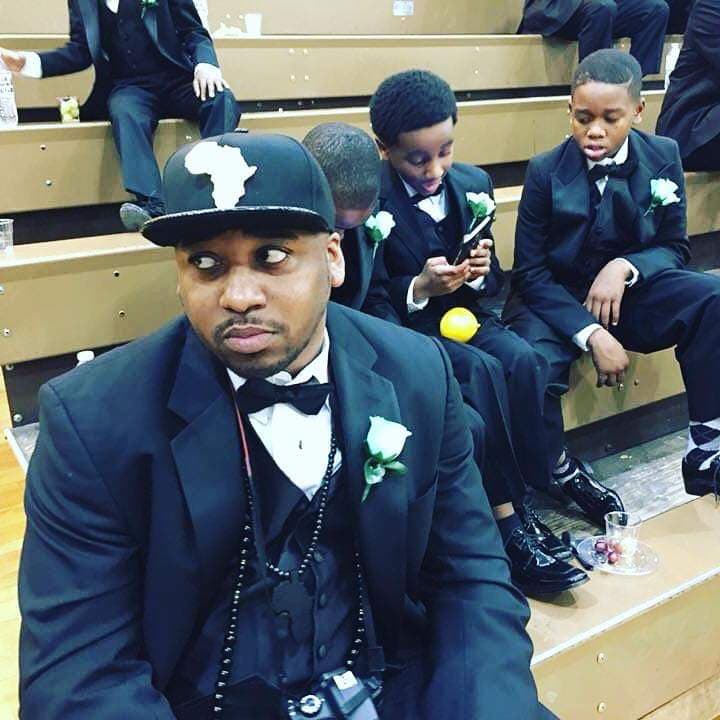 “I didn’t know it would be this dangerous to serve the community,” says Gabriel Taylor, 36, sitting at home in Milwaukee’s Sherman Park Neighborhood.

Sometimes called “Gab,” she’s a long-time associate of well known Sherman Park community organizer Vaun Mayes. Shortly after the 2016  riot in the Sherman Park neighborhood, Mayes, 31, was identified as a “person of interest” by the federal government. The unrest was sparked by the shooting of Sylville Smith, 23, by a Milwaukee police officer and caused $5.8 million in damages over a three-day period. During those nights Mayes was out attempting to defuse the situation near his home, as the Milwaukee Journal Sentinel reported.

But he’s now accused of plotting to use Molotov cocktails to firebomb the Milwaukee Police Department‘s District 7 station. However, no firebombing occurred and a federal raid of Mayes home yielded only empty glass juice bottles. Authorities say Molotov cocktails were recovered from a dumpster somewhere in the Sherman Park neighborhood.

A criminal complaint by Bureau of Alcohol, Tobacco, Firearms and Explosives (ATF) agent Rick Hankins claims — based on the word of two unnamed informants — that Mayes was present at an apartment where materials to make Molotov cocktails were found, and that he manufactured some of the illegal explosives himself.

Despite the charges, a federal judge decided in July 2018 that the government couldn’t prove Mayes was a danger to the community. He was released to await trial after several days of confinement, and continues working with the community.

Mayes’ attorney, Robert LeBell, has said there is no evidence connecting either incident to Mayes, and that Mayes has been “under the microscope” for nearly two years and has cooperated with investigators.

Many residents have voiced support for the activist and youth mentor, and skepticism about the case against Mayes. Alan Schultz, an organizer with the Close Milwaukee Secure Detention Facility campaign, called the charges “preposterous.” He says Mayes “has been working tirelessly with the youth in his community to prevent what occurred during the Sherman Park uprising.”

Mayes founded Program the Parks (PTP) in 2016 alongside Taylor. Their work began with attempts to de-escalate conflicts between youth in Sherman Park. PTP grew into an organization which now provides meals, activities, and youth guidance to teens growing up in poverty and often without direction.

Taylor says that police officers initially seemed supportive of the program, but that changed once new officers began patrolling Sherman Park during the summer. Taylor says she and Mayes eventually came to know these more skeptical officers on a first-name-basis, some from the Milwaukee Police Department and others who were Milwaukee County deputy sheriffs.

Concern about how area teens were treated led Taylor and Mayes to teach them about constitutional rights. Taylor says local youth are given a lot of misinformation about what the police can and can’t do. “They (police) know kids don’t know the law,” she charges.

Mayes has been outspoken about the roles that racism and police misconduct play in Milwaukee and has protested the deaths of people killed by police, including Dontre Hamilton and Jay Anderson Jr. Mayes also gained a negative reputation among some officers after symbolically trampling the American flag at a protest.

PTP was seen as “the rebel organization,” says Taylor. In an article by the now-defunct Milwaukee Stories website, Unitarian Universal Church West Minister Suzelle Lynch called Mayes a “very successful community organizer,” but one one who worked “outside the system” to help young people.

Taylor points to subtle signs that PTP was being targeted before the Mayes arrest. “People around us were getting picked up. They were targeting people around Vaun more than him,” says Taylor, adding that a mere association with Mayes “feels criminalized.” She says since 2016, eight to ten people have privately shared accounts of being approached, detained, or questioned by MPD and ATF. Taylor and Mayes feared at least some were serving as informants for reduced or dismissed charges on alleged crimes.

Taylor says PTP encountered phone malfunctions: the phone turning on or off unprompted, and difficulty sending or receiving communications became regular. This phenomena is associated with surveillance nationwide, particularly during protests.

“Surveillance of organizers is real, and it isn’t always law enforcement that is conducting it,” Schultz says. Often “it is people that have positioned themselves, sometimes even genuinely, alongside of you and are actively aiding you in doing good community work.”

“We are all taking risks to improve our daily lives, ” says Andrea Rodriguez, an activist and appointed member of Milwaukee’s Safety and Civic Commission. But while activists in Milwaukee do experience surveillance, she adds, it’s typically “not to the extent seen with Vaun.”

According to a Department of Justice press release, “ATF is perusing multiple investigations” related to the Sherman Park riots. It quotes ATF Special Agent In Charge Joel Lee who hopes the Mayes case will “bring us one step closer in holding individuals responsible for the violence and disorder back in 2016.”

Some have compared these investigations to historic surveillance of black activists. In the 1960’s and ’70’s, the FBI used the COINTEL PRO (Counter-Intelligence Program) to target activists and groups with surveillance, intimidation and infiltration.

Agents were ordered to “enhance the paranoia” of their targets who were often systematically discredited. COINTEL PRO was revealed in 1971 after activists covertly broke into an FBI office and stole records. It was later revealed that seven COINTEL programs were targeting black activists, the anti-war “New Left”, and white supremacy groups.

A leaked Department Of Justice memo in late 2017 about so-called “Black Identity Extremists” described them as a “movement” of people who might advocate for violence against police and are motivated by “perceived” racial injustice. Schultz calls the BIE designation “a new age COINTEL PRO where Black activists, organizers, and community leaders are targeted and harassed for espousing a more radical politic than this current government,” referring to the Trump administration.

The Department of Justice didn’t respond to multiple requests for comment for this story. The Milwaukee Police Department was also contacted regarding the Mayes case and whether it monitors political activity. Their public information officer stated the department “does not have a comment.”

Taylor and Mayes continue their work through Program The Parks. In a Facebook post on January 4th, 2019, Mayes had this to say: “Although they seek to silence me… I will not be intimidated, deterred, or swayed.” He promised to continue his “duty to serve, regardless of what has transpired.”