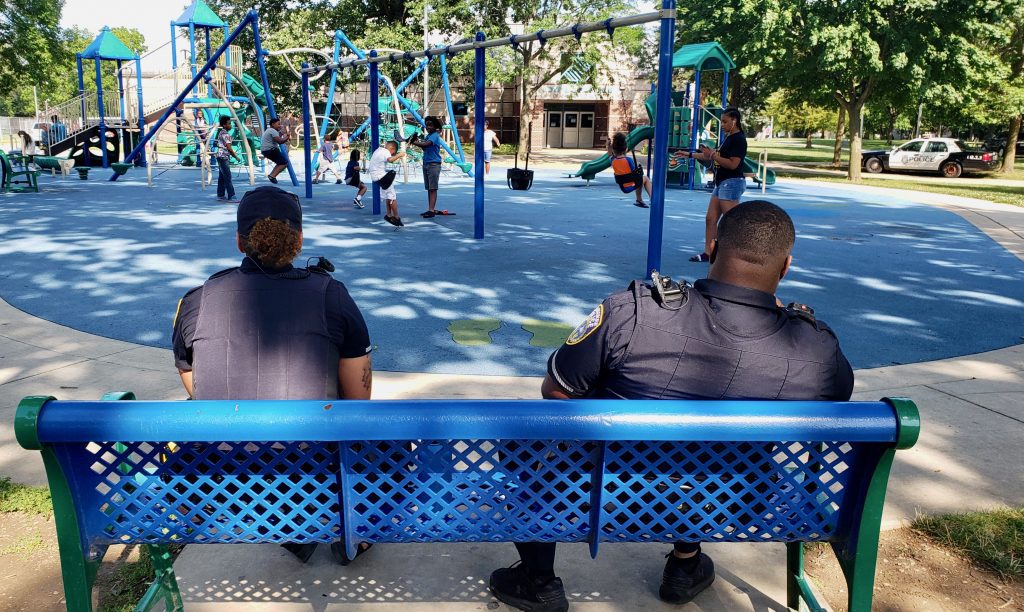 Officers from Milwaukee Police Department’s District 7 sit at a bench last week in Sherman Park. Willie Murphy, District 7 police captain, told NNS in a 2018 interview that “I want to keep officers in their assigned areas, so the residents and officers can become familiar with each other and the problems that go on in the community.” Photo by Edgar Mendez/NNS.

It’s a muggy 87 degrees, and police presence is thick in Sherman Park.

As a squad and patrol wagon wait at a red light on Sherman Boulevard, two officers from the Milwaukee Police Department’s District 7 sit at a bench in the children’s play area.

“The cops, kids and teens all hang out at the park; they’re all here,” said Trenayce Jordan, as she takes turns pushing her 2-year-old grandson, Logan, and 4-year-old son, Kyle, on side-by-side swings.

Jordan described the scene last week as the new normal at Sherman Park: two groups that don’t fully trust each other but have become more comfortable with sharing the same space.

It’s a sharp contrast from the night of August 13, 2016, when footage from the Sherman Park neighborhood filled television screens in Milwaukee and across the world. That night, stores burned, and angry young men denounced the killing of one of their own—23-year-old Sylville Smith—by a Milwaukee police officer.

That officer, Dominique Heaggan-Brown, was found not-guilty of first-degree reckless homicide in Smith’s murder, even though body camera footage showed him firing the fatal shot into his chest after he’d tossed his gun. He was eventually convicted and sentenced to three years in prison on an unrelated sexual assault charge.

Since that night, resources and promises have poured into the neighborhood, although several community projects were already occurring. The goal was to improve economic conditions that many said fueled the powder keg of frustration and also to strengthen relations between residents and the police, which lit the fuse. 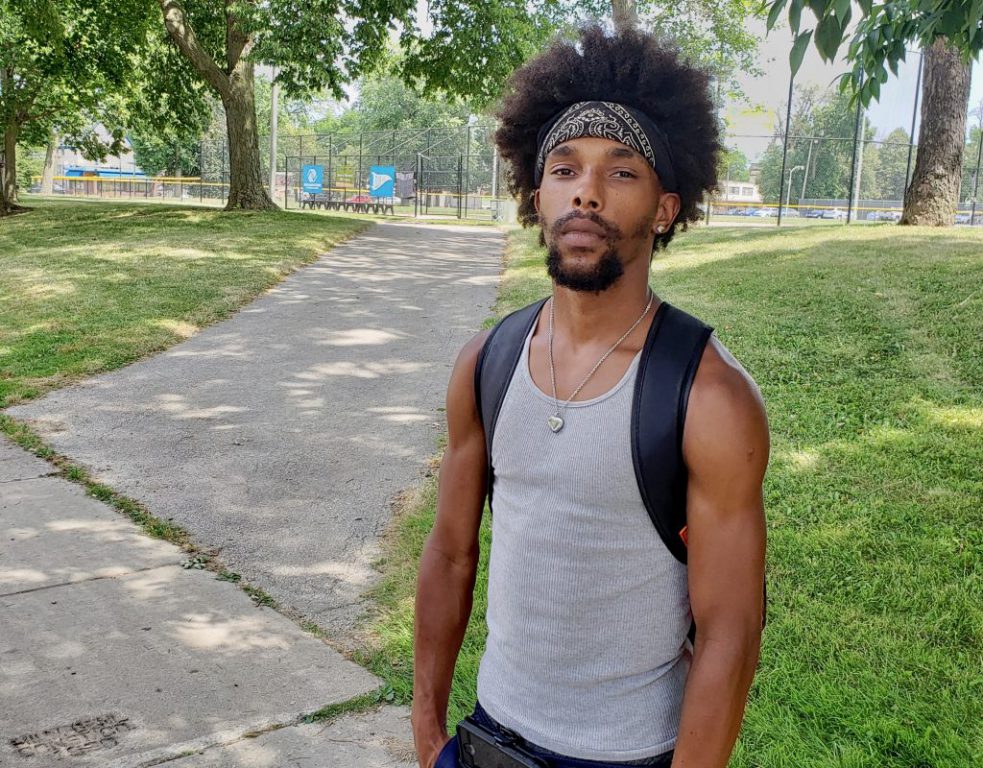 Jeff Henderson, 25, walks through Sherman Park on his way to work each day. Photo by Edgar Mendez/NNS.

Images of those flames still are vivid for Jeff Henderson, 25, who watched them on TV from his living room couch. He walks down a different Sherman Boulevard than the one that was portrayed that night. This one, he said, is more serene. He’s not sure if police and residents get along better now than they did back then, but he does notice more cops in the area. Once in a while they interact.

“Sometimes they say hi to me,” he said.

Two teenage cousins who stood nearby and asked not to be identified agreed.

“Yeah, we see police here all the time, but they don’t really bother us,” said one as the other nodded in agreement.

Some see the surveillance at the park and surrounding neighborhood as a continuing example of racial profiling and harassment, which led to tension three years ago. Others point to it as an example of community policing, which Chief Alfonso Morales made a priority once he became chief in 2018.

But in a late 2018 interview with NNS, Willie Murphy, District 7 police captain, said, “I plan to go into the community with my officers to get to know the residents.”

“I want to keep officers in their assigned areas, so the residents and officers can become familiar with each other and the problems that go on in the community,” he added.

“Not at all,” she said, when asked if things had gotten better between police and residents since 2016. More police presence isn’t always good, she said.

Interactions such as the ones described by Jordan, Henderson and Graham serve the goal of having police interact with the community, especially young people, in a non-crisis or negative situation, said Katie Sanders, executive director of Safe & Sound.

“There’s some shared norms in the park now. The officers are not simply responding to a call for service,” Sanders said.

Safe & Sound, an organization that works to unite residents, youths and law enforcement, identified the Sherman Park neighborhood as a focus area in 2015. At the time, Sanders recalled, there were high levels of drug trafficking and crime in the area. Another problem was widespread discontent and frustration as well as a lack of communication between young people and the police, she said.

“I don’t think anybody knew how intense things would get,” Sanders said.

Safe & Sound partners with other community organizations to engage residents and has become even more active in the area since 2016, Sanders said.

On the front lines of that work is Danielle Johnson, community organizer for District 7. She’s been working to engage youths in outdoor programming at the park rather than forcing them inside.

“We had to find out what keeps them coming to the park every day and find cohesive ways for them to have fun,” said Johnson, who credits the Boys and Girls Club and other groups for working to create programming for the teens.

Another strategy that Safe & Sound has employed, with the support of the Zeidler Center for Public Discussion, is using Police and Resident Listening Circles.

“What commonly happens when you pull two groups together, especially with law enforcement present, is that people start yelling, and that is what we hate to see,” she said. “Without structure you exacerbate the tension.”

That theory was put to the test during one listening session, when the Freedom Fighters showed up to a circle between residents and police.

“We never had so many people armed at a meeting, but the two groups were willing to sit down and share with one another,” Wilson said. Polling done before and after listening circles has shown that resident trust in police is up slightly in the neighborhood.

Wilson said the conditions that led to the unrest in Sherman Park did not occur overnight, and that there is no quick fix. Unless policy and relationship work continues, things could bubble up again, not just at Sherman Park but anywhere in the city, she cautions.

“Not much economic viability, no real job creation, the same old lip service and pockets of crime and poverty,” Lamb said.

“A young black man doesn’t always get shot and killed by police in Sherman Park, but there are systemic problems that haven’t been addressed,” she said. “People don’t really feel like there’s been a resolution to what happened three years ago.”

A short distance from Lamb’s office on West Fond Du Lac Avenue, three police officers pound at the door of a home, while a few blocks away, a pair of officers sits in their car at the foot of the park.

It’s the new normal in Sherman Park. Although it is not clear whether it’s that much different than before.