By Isiah Holmes, Wisconsin Examiner - Oct 14th, 2019 02:53 pm
Get a daily rundown of the top stories on Urban Milwaukee 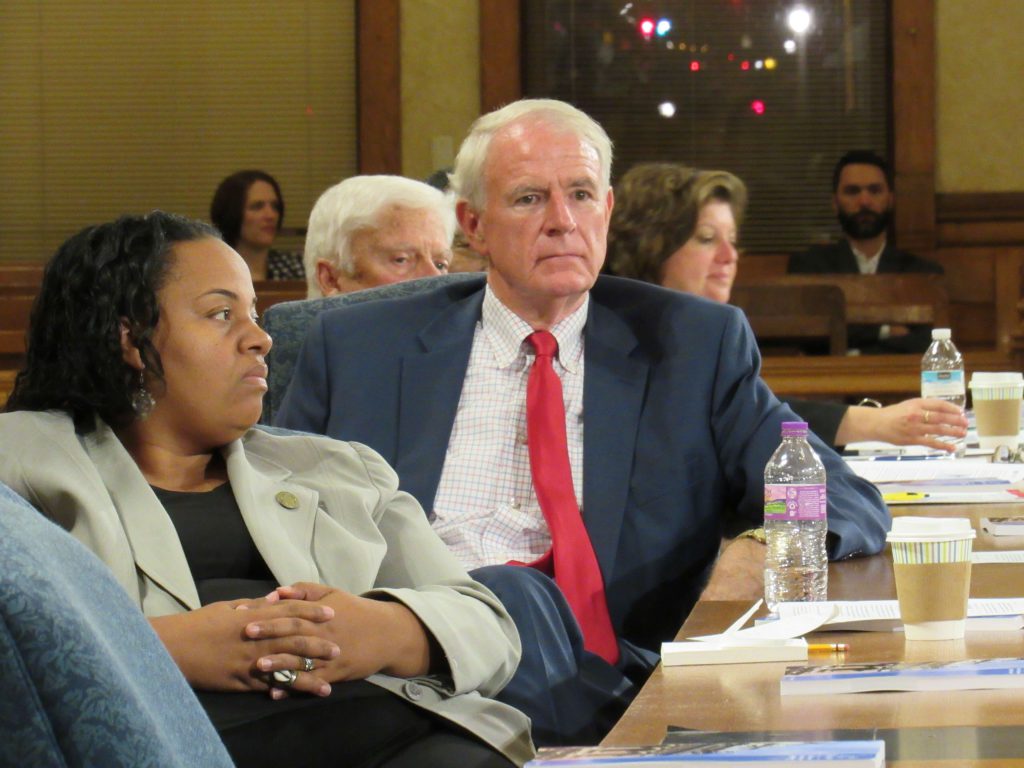 Dozens of Milwaukee residents gathered at City Hall on October 7, criticizing Mayor Tom Barrett’s proposed 2020 budget plans for nearly four hours. Common Council President Ashanti Hamilton remarked during the meeting, “This has probably been the most people that we have had show up to a community hearing on the budget,” and said he drew encouragement from the turnout.

The Milwaukee Police Department is expected to receive 47% of the city budget. Community members and organizers instead implored officials to invest in education, youth work programs, repairing roads, and other underfunded city needs.

Despite the department receiving nearly half the budget, the Milwaukee Police Association still disagreed with Barrett’s proposed cut of 60 sworn officers from MPD. Most of those, however, would be due to retirements and not outright layoffs.

“Let me tell you what these cuts to the Milwaukee Police Department will cause,” said Police Association President Shawn C. Lauda. “Not might cause, will cause.” Lauda says the cuts would result in longer response times by police, and “less proactive police work.” He asks, “How many lives has a police officer saved? That cannot be quantified, because they prevented a life from being taken.” The Police Association president went on to warn that, “crimes will go unsolved, criminals will be emboldened.” 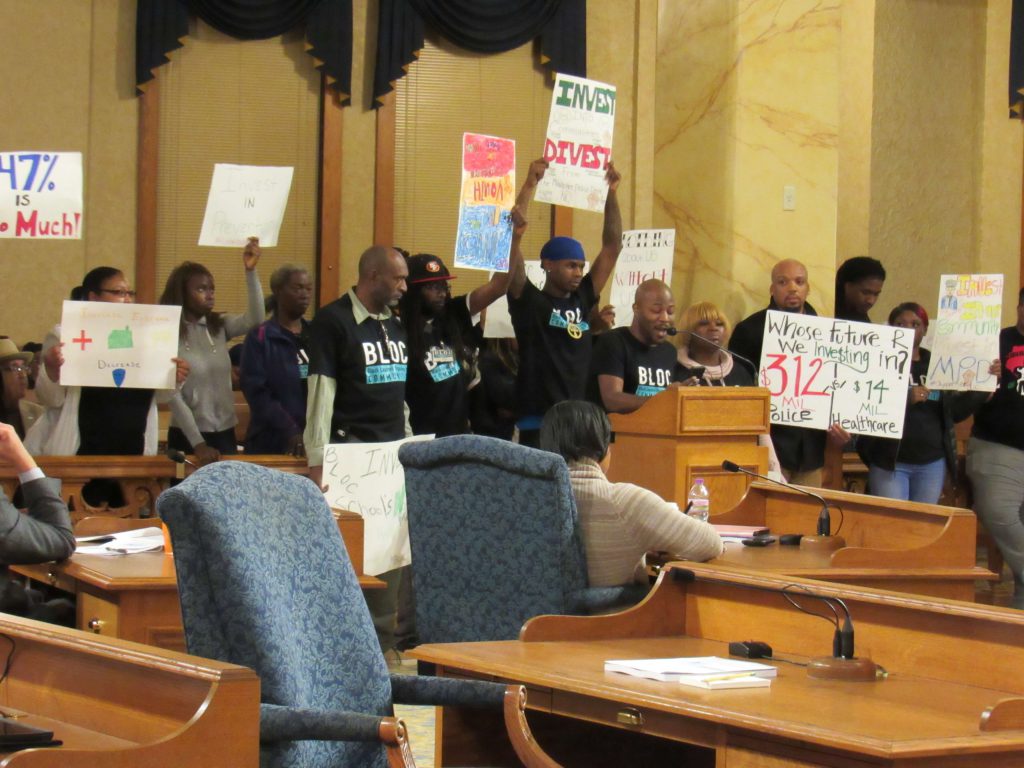 Community members and activists at the budget meeting. Photo by Isiah Holmes/Wisconsin Examiner.

The next three and a half hours would see well over 40 community members telling a very different story. “I live in Milwaukee and I represent people who work in Milwaukee,” Paul Spink, president of the union for the American Federation of State and County Municipal Employees (AFSCME), told Wisconsin Examiner. “The budget does not reflect what I need as a person who lives in this city. And it does not reflect what my members need as employees of this city.” Mayor Barrett’s budget plan proposes a freeze in the hiring of general city employees.

Spink says over his last 10 years of owning a Milwaukee home, he’s called the police “maybe three times,” but “I call DPW (Department of Public Works) all the time about garbage collection, streets being plowed, leaf collection. All of those things that you cannot live in this city, and not have. So we can’t cut funding to DPW to keep spending more money on the police.”

Melanie McCurtis, who lives on 47th Street in the 53210 area zip code, also said the budget doesn’t reflect her neighborhood. “My community will see no benefit,” she told the council. “We already experience no benefit now. People in our community pay anywhere from $800 to $1200 in rent for housing that should be condemned.” McCurtis says there’s no accountability for landlords in the city and that, “I cannot become a homeowner because all of my money is going to my rent.” She pressed city officials to invest in community housing which is affordable and accessible to everyone. “We should benefit for living here, for working here, and we’re not thriving.”

Sarah Noble, a long-time Milwaukee resident, said, “I couldn’t believe when I saw the budget numbers that we are in this same place year after year after year.” Noble told Wisconsin Examiner that when she spoke at the meeting, she was mainly addressing the common council since the mayor had already put the budget on the table. “I want them to get in there and care about the people by making sure that they’re putting in place policies that support the lives of people, not talk about it. I want them to stand up and be the leaders they’re supposed to.”

Danell Cross, a mother of six and grandmother of 22, says her children deserve to have a good life. “What we see on the north side of Milwaukee is that we are not valued. Our children are not valued.” Cross expressed her sadness that, walking down Sherman Boulevard toward her community, Metcafe Park, “As soon as you hit 38th Street you can tell that this community has been forgotten about by the city.” Emotional, Cross said, “We want some investment. We want to know that you care, right now we know that you don’t.”

A few residents pointed to major shifts in quality between “inner-city Milwaukee” and surrounding suburbs as further evidence that certain communities are being left behind by the city. Alderwoman Nikiya Dodd (District 5) explained that city officials work together with mayors from the suburbs of Wauwatosa, Shorewood, and West Allis to help balance budgets and services.

“Mayors across municipalities are working together on some of those projects,” Dodd told Wisconsin Examiner. “But I think, unfortunately, Milwaukee has gotten the short end of the stick because we don’t have leadership that’s making those tough decisions. And say, ‘You know what? Maybe I should be creative and not always rely on state funding.”

Mayor Tom Barrett’s office emailed Wisconsin Examiner, “I’m glad so many citizens took the time to participate and show their interest in city government. Opinions on where limited resources should be prioritized are what budgets are all about and the more debate the better.  I was heartened by the support and positive testimony for my Office of Violence Prevention. My budgets will continue to support and invest in it.”

Milwaukee was the center of the state’s budget battle shortly after Gov. Tony Evers took office. The various cuts in funding, and slashes to benefits from the state’s shared revenue fund, have weakened the city’s ability to fund much-needed projects. Namely, replacing it’s network of lead lateral pipes, and addressing the fallout of lead poisoning in the community’s most vulnerable neighborhoods.

Deanna Branch, a local mother, pushed the city to address the lead water contamination issue. Two years ago, her six-year-old son Aidan was found to have had high levels of lead toxicity in his body. Since then, he’s been diagnosed with multiple disorders including ADHD, and has been hospitalized multiple times. Branch urged the council to invest $240,000 in the Birthing Mom’s Pilot Program. The initiative, in part, would provide Milwaukee mothers with lead water education kits, which include filters. Branch feels the council members were listening, “I was very emotional,” she told Wisconsin Examiner, “I’m here for my son’s safety because of the lead.”

Some other residents felt city leaders were beginning to lose focus not long into the meeting. A few used part of their limited talk time to blast the council and remind them that they’re being watched. “We will see in the future if they actually heard us,” says Joy Berry, who condemned the city for investing nearly half its budget in MPD while not providing affordable housing to the homeless. The city recently issued an “eviction notice” for hundreds of residents living under the I-94 highway bridge in a large tent city. It’s unclear where the residents will go, especially with winter coming.

Activists from local anti-war groups also spoke, highlighting the connection between policing and the American military machine as a whole. Since 9/11, America has increasingly invested in militarizing local and state police through federal grants and programs, rewarding departments with military equipment, training, and vehicles. 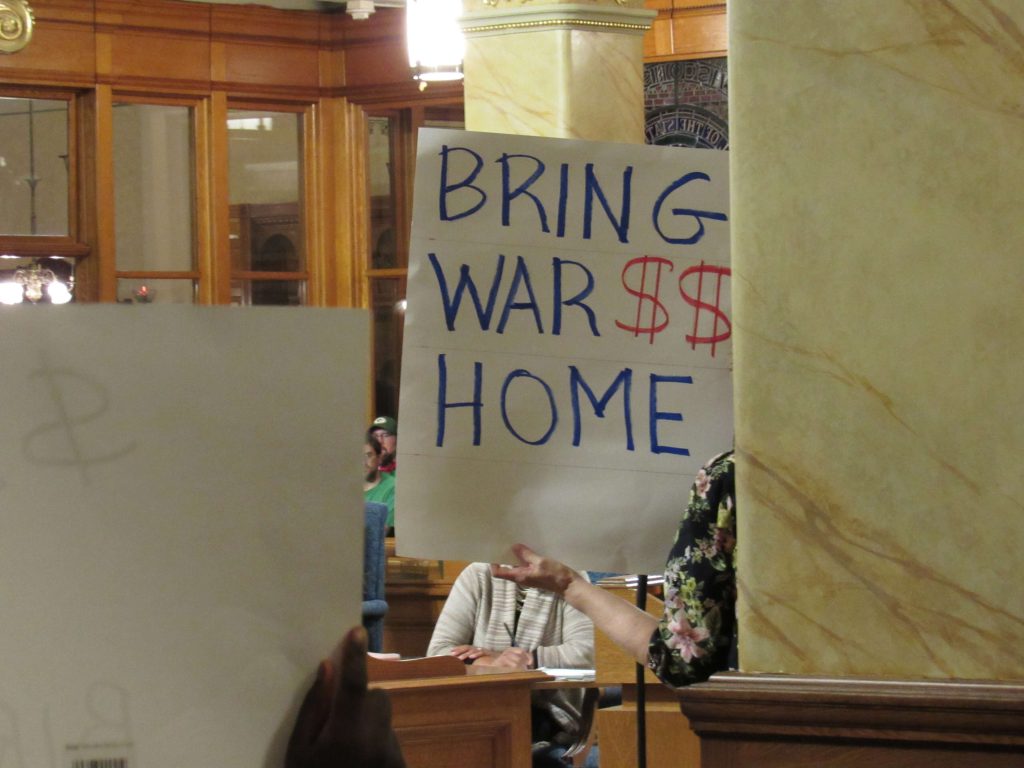 Anti-war activists were present during the meeting. Photo by Isiah Holmes/Wisconsin Examiner.

The country collectively spends $100 billion a year on policing, and another $80 billion on incarceration. From 1997-2016, state and local spending on police and corrections rose from $59 billion to $187 billion. In 2014, Wisconsin ranked 12th in the nation for per capita local police spending. Organizers urged the city to invest in community programs, and opportunities for people rather than on a force which is designed to respond to crimes after they’ve been committed.

Ald. Dodd, said that she feels the same way that the community feels, and that the city hasn’t been investing in the right places. She feels the city’s leaders, Mayor Barrett included, have shown a “lack of interest in wanting to give the people what they have been asking for forever. And that is putting the money where it would be used for preventive measures. We have to do more, we have to do better.”

Boosting support for preventive programs also was a recurring request from local organizations that employ at-risk youth and perform services which are lacking in their neighborhoods.

“They [city leadership] were put in quite a predicament tonight,” said community organizer Vaun Mayes, “we’ll see what their reaction is.” Mayes, a resident of the Sherman Park neighborhood, heads two grassroots programs, Program the Parks, and Comm Force. Both are intended to steer troubled youth in a more productive direction, promote community activity, and address issues ranging from mental health crisis situations to spreading the word about missing persons.

Mayes also works to aid families struggling with loss and trauma from gun violence on Milwaukee’s predominantly African-American north side. The shooting of a north side woman, as well as slayings in the south side, have made headlines in recent weeks.

Mayes was arrested and charged with a plot to firebomb police in 2016, shortly after a series of incidents of unrest and riots in the Sherman Park neighborhood, after a police officer shot and killed 23 year old Sylville Smith. A federal judge ruled in 2018 that the government couldn’t prove Mayes was a danger to the community and he was released. Mayes’ trial has been delayed multiple times, and he continues his work in the community from his home.

Mayes asked the city to support programs like his and an initiative started by Billy Spencer, owner of Spencer Construction. Spencer’s  initiative employs youth from low-income communities and teaches them skills to enter the construction trade. Spencer’s youth cut their teeth working on condemned or abandoned homes in neighborhoods across the city.

“I hope the council was listening,” Angela Lang, executive director of Black Leaders Organizing for Communities (BLOC), told Wisconsin Examiner. “There was a couple of times where it looked like they nodded off and they weren’t actually paying attention. But as the last speaker pointed out, it was overwhelming, everyone had the same message. People we didn’t even organize. It goes to show the needs in investments that the community is demanding.”