Contractor will start after months of delays. 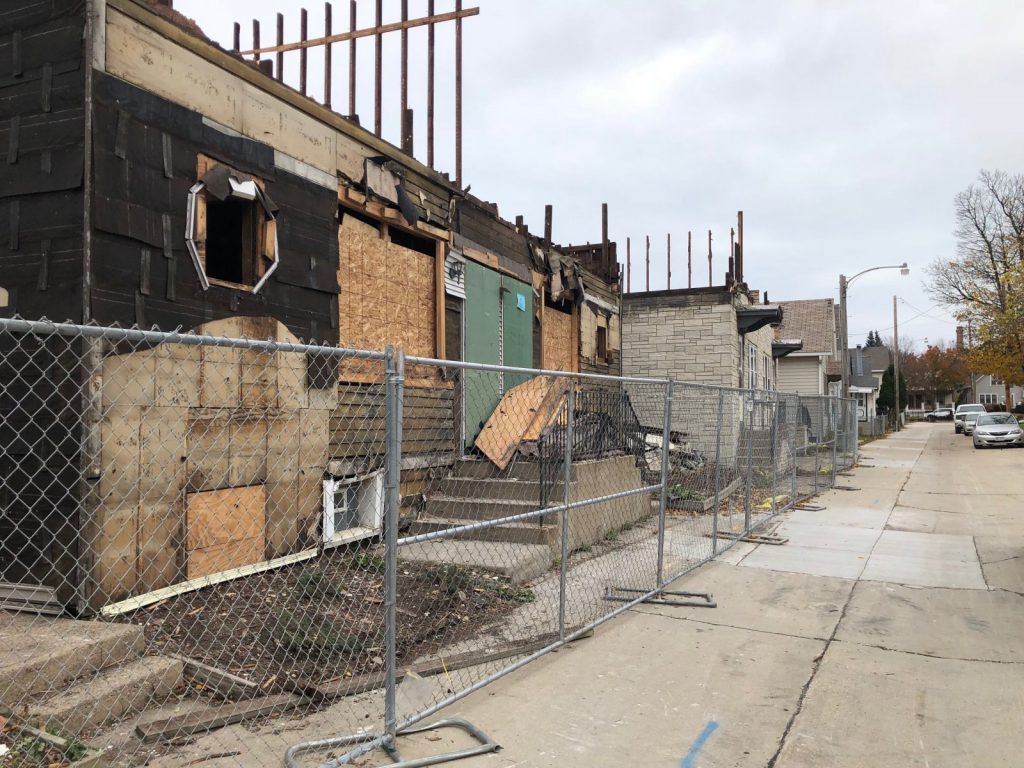 Deconstruction of two homes on E. Archer Ave. for the KinetiK building. Photo by Jeramey Jannene.

The city’s deconstruction program, intended to create jobs and salvage reusable building materials, has been mired with false starts, a changing market and political infighting. But work on the city’s first sizable deconstruction contract, awarded in April to Spencer Renovation & Construction, should finally get under next week after months of delay.

The Milwaukee Common Council approved a deconstruction ordinance in late 2017, requiring buildings being taken down that were built in 1929 or before be deconstructed, as opposed to mechanically demolished with heavy equipment, and that materials be salvaged instead being sent to the dump. The ordinance applied to both the city and private citizens seeking demolition permits.

“We got into this with the goal of creating jobs and promoting sustainability. Two goals which this city has spent the last decade talking about,” said Alderman Robert Bauman in January. Bauman and Ald. Nik Kovac sponsored the legislation and argued that the jobs would be of particular value because they would be entry-level jobs that provided training.

Bauman argued that once enough deconstruction activity was underway a true market for the materials, notably old-growth timber, would emerge. This in turn would lower the cost of deconstruction work, making it closer to traditional demolition which costs between $15,000 to $20,000 per home.

But after a few pilot deconstructions, the Department of Neighborhood Services (DNS) reported it was receiving increased bids for as much as $60,000 per home and a backlog of buildings to be razed was growing. In January council members Milele A. Coggs and Russell W. Stamper, II, each of which have a number of homes slated for demolition in their district, introduced a resolution that suspended the deconstruction ordinance until March 2020 and required DNS to develop a team in-house or contract with an outside vendor to develop the capacity to utilize the $1.2 million the council allocated specifically for deconstruction.

And in April, Billy Spencer of Spencer Construction was before the Zoning, Neighborhoods & Development Committee and expected to begin work shortly on deconstructing 50 homes. But that didn’t happen.

Spencer, an African-American, would employ a number of ex-offenders, work on job training and understood the value of the materials, seemed like a dream contractor for the city. Bauman, in April, praised Spencer and DNS. But that changed come October with no homes having been deconstructed.

“We were fooling around all summer shuffling paper,” said Bauman of DNS and other city departments Tuesday morning.

“It took months for that contractor to obtain proof of insurance and bonding,” said interim DNS Commissioner Thomas G. Mishefske. But he said Spencer would now be starting work in the next week.

“He tells a different story,” said Bauman of Spencer and the delays. The alderman has long claimed Mayor Tom Barrett and other department heads want to repeal the deconstruction ordinance. “It’s a constant roadblock instead of saying let’s walk you through this system.”

Stamper is also concerned about the delay. “After it was taking so long, I called and asked him and he was having some issues, but he’s ready now,” said Stamper.

Bauman noted that Spencer was one of the participants in the pilot program. “So he all the sudden forgot how to do it?”

The alderman also expressed frustration with the lack of traditional demolition activity. The city has 461 properties subject to a raze order, everything from city-owned single-family homes to privately-owned Northridge Mall, but has only demolished 44 properties this year.

“We are appropriating all this money for the purpose of blight elimination and no one seems to want to eliminate any blight,” said Bauman of the $2.8 million demolition and deconstruction budget. “It’s paper shuffling, it’s logjams with paperwork that’s allowing all these properties to stand, which fuels blight, which fuels neighborhood complaints, which fuels alderpersons to say ‘just tear everything down,’ but you’re not even doing that.”

“I am not satisfied with the number either,” said Coggs.

“Even though 44 is not a number I’m proud of, it’s better than five,” offered the alderwoman about the total of properties razed in 2018.

She asked Mishefske what he would need to move things forward, to which the interim commissioner noted the deconstruction ordinance would need to be repealed before it went back into effect in March 2020. He also noted that without the paperwork issues with Spencer the total number would be much higher.

A press conference with Spencer, DNS and council officials is expected next week.

How Does The City Pick What Properties to Demolish?

The city’s list of properties subject to a raze order has hovered near approximately 500 properties in recent years, but the city does not have the funding to raze every property. And even if it could, it might not want to as a handful of properties are saved every year, including an apartment building being redeveloped at S. 5th St. and W. National Ave.

Stamper asked Mishefske how the properties that get razed are selected.

“Obviously with the deconstruction project, we try to look through the inventory and pick the candidates most likely for success,” said Mishefske. He said the department also relies on messages from council members with regards to problem properties and the Department of City Development for information on city-owned properties and their condition. The DNS veteran said dangerous properties are always addressed first.

Properties can spend a substantial amount of time subject to a condemnation order before they’re demolished. “We have some properties that have been on the list for five years,” said DNS supervisor Chris Kraco.