City poised to deny claim by motorcyclist, clearing way for first of 11 lawsuits. 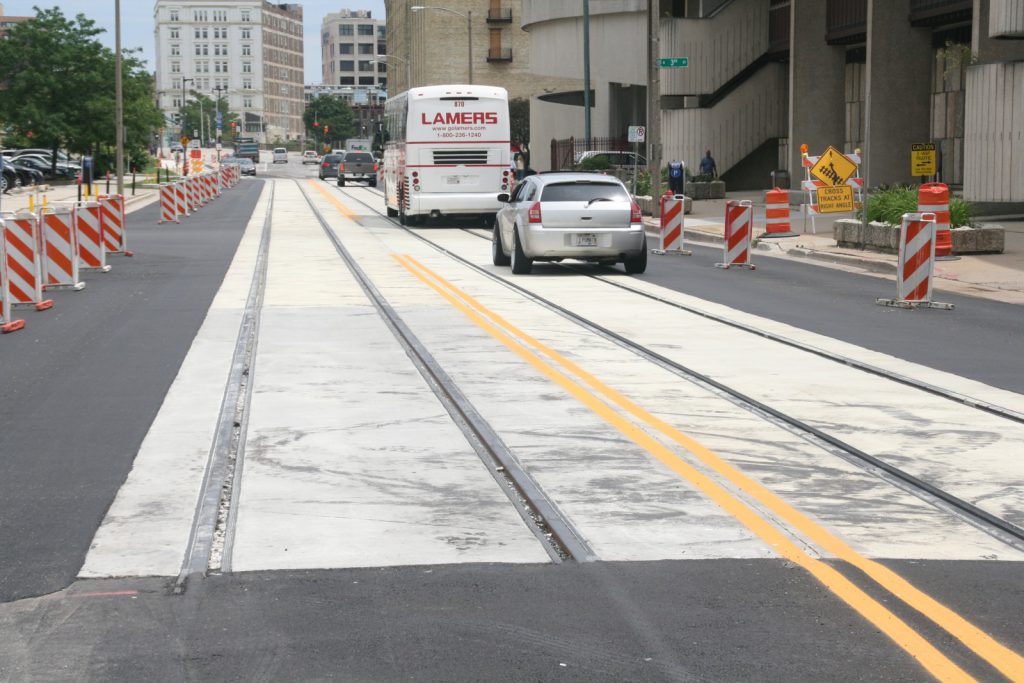 A lawsuit over an injury suffered by a motorcyclist riding over streetcar tracks embedded in a city street could finally be headed to court. Actually 11 of them.

Last August, Hupy & Abraham S.C. announced it was filing a notice of injury against the City of Milwaukee. The firm, on behalf of Kenosha resident DuWayne D. Criter, is seeking $50,000 in compensation for damages. Criter was allegedly heading east on W. St. Paul Ave. when he attempted to change lanes to turn north on Water St. and had the front wheel of his motorcycle get caught in the gap between the rail and street resulting in a crash.

The claim, a precursor to a lawsuit, is set to be denied by the city. A letter from independently-elected City Attorney Grant Langley and Deputy City Attorney Jan Smokowicz to the Common Council states: “There is no evidence that the City was negligent.”

Relying on a statement from the Department of Public Works Infrastructure Services Division, the city’s counsel writes “the streetcar tracks at West St. Paul Avenue and North Plankinton Avenue were constructed in accordance with the standard specifications, plans and accepted standards for streetcar infrastructure.” The work was performed for the city by infrastructure contractor Kiewet.

The city’s denial of the claim, which could come as early as May 7th, would open the door for Hupy & Abraham to file a suit in Milwaukee County Circuit Court. The city routinely rejects such claims for personal injury. The measure will first be heard by the council’s Judiciary and Legislation Committee on April 29th.

“This is par for the course. It’s what we expected and we are going to now file lawsuits,” said attorney Michael Hupy in an interview. The attorney said he believes a Hupy-initiated advertising campaign in advance of Harley-Davidson‘s 115th-anniversary celebration prevented additional accidents. “There hasn’t been one accident since the Harley 115th that I’m aware of,” said Hupy. He said the city failed to provide adequate notice of the track’s installation.

The law firm still has 10 claims pending for other motorcyclists and bicyclists before the city, and the attorney expects them all to be denied. He intends to file a lawsuit for each case. Hupy & Abraham has represented over 4,000 motorcyclists in court since its founding in the 1960s.

“This is not the first time in history someone has sued over an injury caused by an engineering feature,” said streetcar proponent, attorney and area alderman Robert Bauman in an interview with Urban Milwaukee. Referencing everything from metal bridge plates to concrete curbs, Bauman said: “the law is pretty well settled.” But the case could end up in the increasingly partisan Wisconsin Supreme Court acknowledged the alderman, who said the political nature of the streetcar could impact the outcome.

How soon will we know? “Maybe we will have a decision in three to four years,” said Bauman.