5 Citizens To Give Sincere Thanks

Our Thanksgiving class of 2018, five Milwaukeeans who've made this a better city. 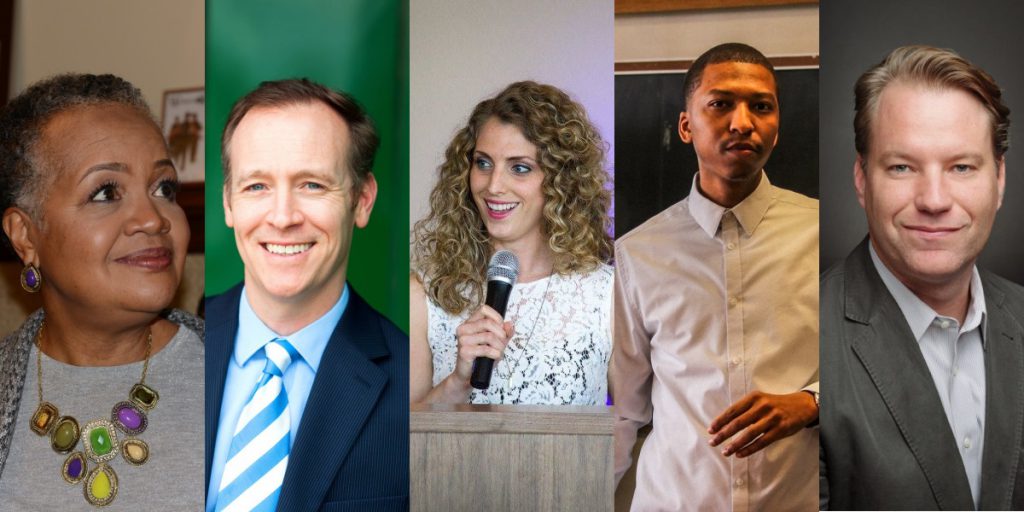 Five Milwaukeeans to be Thankful For.

Who is making Milwaukee a better place? Here are five citizens we salute at a time of Thanksgiving:

For two decades Sharon Adams has been the torch bearer for the revitalization of Lindsay Heights. Adams moved away to go to college and then returned to Milwaukee in the late 1990’s and found the neighborhood she grew up in ravaged by deindustrialization, overwhelming poverty and too much violence. And while the 53206 zip code, which encompasses much of Lindsay Heights, has become known for having the highest rate of incarceration in the state, Walnut Way Conservation Corp., an organization co-founded by Adams, has shown the way forward.

The organization and its many partners have helped lay the groundwork for a revitalization of Lindsay Heights. In recent years, her daughter JoAnne Sabir and son-in-law Maanaan opened The Juice Kitchen around the corner from Walnut Way’s headquarters. The cafe is located in the Wellness Commons project developed by Walnut Way and developer Juli Kaufmann.

Kaufmann also created a series of small office suites in the former Wally Schmidt Tavern with project partner Jeremy Davis. The two leased out the first floor to The Tandem restaurant, which focuses on service skills training (and really good comfort food). I feel confident in saying none of this would have happened without Adams’ leadership, dedication and commitment to the neighborhood.

In 2019, Adams is likely to be in the news again. Adams and her husband Larry hope to open Adams Garden Park along W. Fond du Lac Ave. with help from Kaufmann.

It’s hard to miss the good news surrounding the Milwaukee County Transit System and its employees. In the face of ever difficult budgets, MCTS chief marketing and communications officer Brendan Conway has spent the last three years transforming the image of the county-run system. He’s successfully shared videos, a number of which have made their way onto national television networks, of drivers finding lost children, disrupting domestic violence and, most recently, finding shelter for a homeless Milwaukeean. He’s also leveraged new high definition cameras on buses for things far more whimsical, including filming the odd number of large animals drivers see scurrying across city streets.

The system’s rank-and-file operators have quietly patrolled the city’s streets for years, but until Conway came along it was hard for the public to know the valuable service they provided beyond simply getting you from point A to B.

Conway has successfully leveraged his connections and knowledge from his time as a reporter at WISN and as communications director for County Executive Chris Abele into maximum media exposure for a bus system that was previously as unsexy as they come.

Conway’s biggest feat might be one that no one even thinks of, making the county’s proposed East-West Bus Rapid Transit line non-controversial. While the streetcar endured years of fighting, the BRT has been well-received and is a shovel-ready project once the federal government approves a grant.

NEWaukee has made quite a name for itself in the past 10 years, from throwing bar crawls and raging New Year’s Eve parties to graduating to Young Professionals Week and the NEWaukee Night Market. The group, which bills itself as a social architecture firm, has figured out ways to fundraise for Lakeshore State Park (the Urban Island Beach Party) and bring life to W. Wisconsin Ave. after 5 p.m. with the night market.

And while Angela Damiani‘s long-time partners at NEWaukee, current chief idea officer Jeremy Fojut and since-departed founder Ian Abston, have historically been just as important in the generation of the events, it’s Damiani that’s always led their execution. She’s a no-nonsense leader that’s always looking for the next big thing. Without her, the night market is a busking musician in front of Grand Avenue Mall and a couple food trucks. With her, it’s a gathering for thousands.

In the coming years, Damiani will be tasked with her most difficult task yet. How do you stay relevant as the head of a group known for its young professional programming when you’re no longer one yourself?

Que El-Amin was barely on my radar before 2017. But in the last 18 months, the quiet developer has started to make a lot of noise in Milwaukee. Just this week we covered his plans to redevelop the Wildenberg Hotel property, one the city has had trouble selling for years, into a mix of apartments and office space. He’s also involved in bringing a new affordable apartment building to Old North Milwaukee and a similar project to eastern Sherman Park.

Most encouraging about El-Amin is his intent to bring the rest of community with him. El-Amin and his brother Khalif El-Amin recently debuted The Blueprint, a business bootcamp for 40 companies backed by the city and Northwestern Mutual. Twelve firms from the program advanced to The Cultivator, an accelerator designed to further develop the businesses and generate more exposure.

Milwaukee Film celebrated its 10th annual festival this year, but that might be the smallest thing the organization did in 2019. The non-profit, under the leadership of artistic director Jonathan Jackson, took over operations of the Oriental Theatre and relocated its offices to the city’s new creative hub No Studios.

And while movies often serve as an opportunity to tune out the world and escape, the film festival has served as an agent of social justice in the city. Filmmaker Erik Ljung‘s documentary on the Dontre Hamilton shooting was the centerpiece screening of the 2017 festival. The 2018 festival saw a Black Lens program that was bigger and better than ever. It also introduced a Women in Film audience award to encourage gender equality in the scandal-ridden film industry.

Yes, the organization has a number of big backers including Abele, Katie Heil, Christine Symchych, Donald and Donna Baumgartner and Bud and Sue Selig, but it also has an incredibly gifted leader. Jackson, a Cleveland native who moved here to go to the UW-Milwaukee film school, has been the driving force behind the organization since day one.

The five Milwaukeeans I gave thanks to last year haven’t disappointed.

Developers Joshua Jeffers and Melissa Goins have joined forces, with Goins coming over to Jeffers’ firm. The two, along with attorney Danielle Bergner, form the leadership team of one of the most active real estate firms in town.

Then there’s Kaufmann and Sabir, also in my Thanksgiving group of last year, who will open the Sherman Phoenix next week. And I’m sure we’ll be hearing lots more from them in the future.

And, oh yeah, Giannis Antetokounmpo is leading the Milwaukee Bucks to the team’s best start in decades and is a top-five contender for the Most Valuable Player award. Most importantly, off the court he seems just as nice as a person as he was five years ago as a young newcomer to Milwaukee who discovered smoothies for the first time.