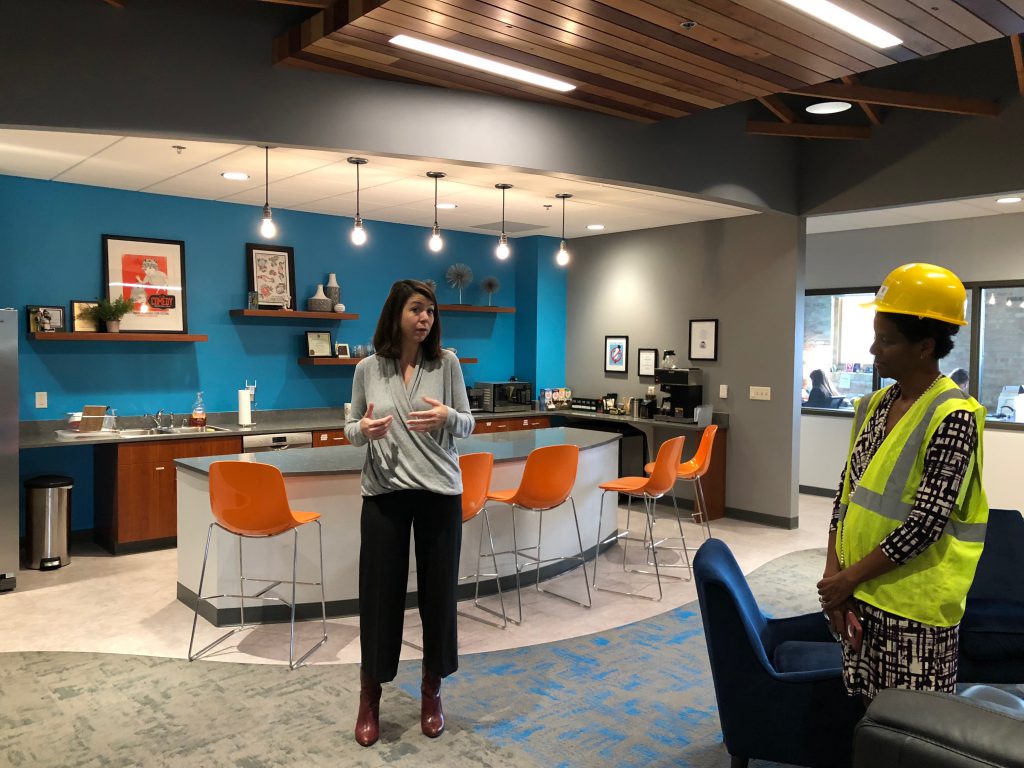 Sara Meaney shows off the Milwaukee Film space at No Studios. Photo by Jeramey Jannene.

“I am so deeply satisfied with what has happened. We have nailed it,” said No Studios chief operating officer Lisa Caesar during a media tour of Milwaukee’s new creative hub.

Caesar and her Academy Award-winning brother John Ridley, both Milwaukee natives, are opening No Studios in a partnership with Chris Abele. The partners have transformed two buildings in The Brewery formerly used by Pabst as a research and development facility into a home for filmmakers, visual artists and recording artists and their firms. Ridley describes the complex as “a space where people can come together.”

The project was first announced in late February, and in less than a year is ready to welcome its first tenant. Milwaukee Film, the project’s anchor tenant, relocated its offices to the facility at 1037 W. McKinley Ave. earlier this year, and other tenants will soon join them in the building. In the coming months UW-Milwaukee School of Film, the Milwaukee Filmmaker Alliance, 371 Productions, Custom Reality Services, and Marquette University‘s film program will all open offices in the building. Gener8tor will relocate its newly-launched Backline artist development program to the building. But the most prominent tenant will quickly become No Studios.

No Studios, a for-profit effort to create a sustainable creative hub, will lease space throughout the building and provide a wealth of shared amenities. A 47-seat theater is included on the first floor, designed with an “English club” aesthetic. Abele is pleased with the result. “This has got to to the coolest screening room in the state of Wisconsin,” said the Milwaukee County Executive during a media preview. The first-floor space also includes a staffed bar and gathering space. Caesar said the space is intended to feel comfortable like a living room.

The second and third floors feature a variety of office spaces, including co-working spaces and private offices. A fourth-floor penthouse space, complete with a bar and rooftop deck, is scheduled to open at the end of February. The partners have hired Luke Repetti to manage the 41,847-square-foot building. Workers could be found on all of the upper floors Friday working to finish the wide variety of spaces.

The name No Studios is a deliberate reference to Ridley’s past and what he believes can power his hometown’s future. “Yes is something you don’t hear enough,” Ridley said at the February unveiling. “No” is also the root word in Japanese for skill, talent and artistic endeavor. Ridley, who is fluent in Japanese, was told no when he applied to New York University’s film program. He ultimately earned a degree from the university after studying East Asian languages and culture.

The prolific screenwriter reached the top of his field when he earned an Academy Award in 2014 for writing 12 Years a Slave. He recently has taken to directing, including the acclaimed documentary Let it Fall: Los Angeles 1982-1992. He’s currently directing the science-fiction romance film Needle in a Haystack starring Leslie Odom, Jr., Freida Pinto, Cynthia Erivo and Orlando Bloom.

The building for No Studios was originally redeveloped for Cardinal Stritch University and changed hands a couple times since Joseph Zilber bought the entire complex. The school has since retrenched to Fox Point, and developer Joshua Jeffers bought the complex for $2.6 million with plans to convert it to apartments. He instead sold the complex to the No Studios partners for $3.2 million.

The space was designed by Abacus Architects and constructed by Greenfire Management Services.

The facility will open to the public Friday night at 7 p.m. with a panel discussion on diversity in filmmaking led by the Milwaukee Filmmaker Alliance. From 9 p.m. until midnight a variety of artists will perform.

Saturday’s events start at 10 a.m. and run until midnight. The Milwaukee Brewers playoff game, which starts at 3 p.m., will be played in the theater alongside an open bar. The full schedule is available on the No Studios website. 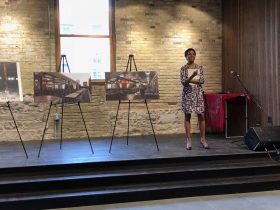 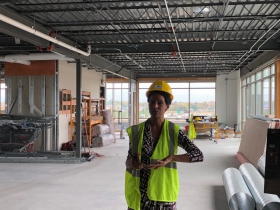 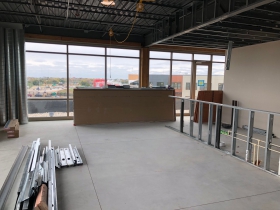 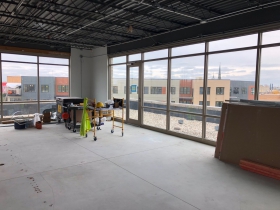 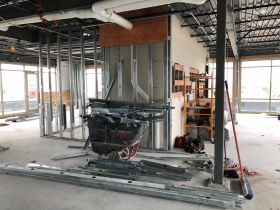 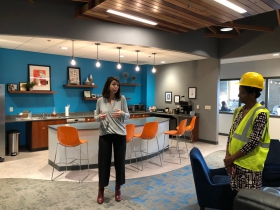