5 Milwaukeeans to Be Thankful For

Milwaukee is a better -- and far more interesting place -- because of these five folks. 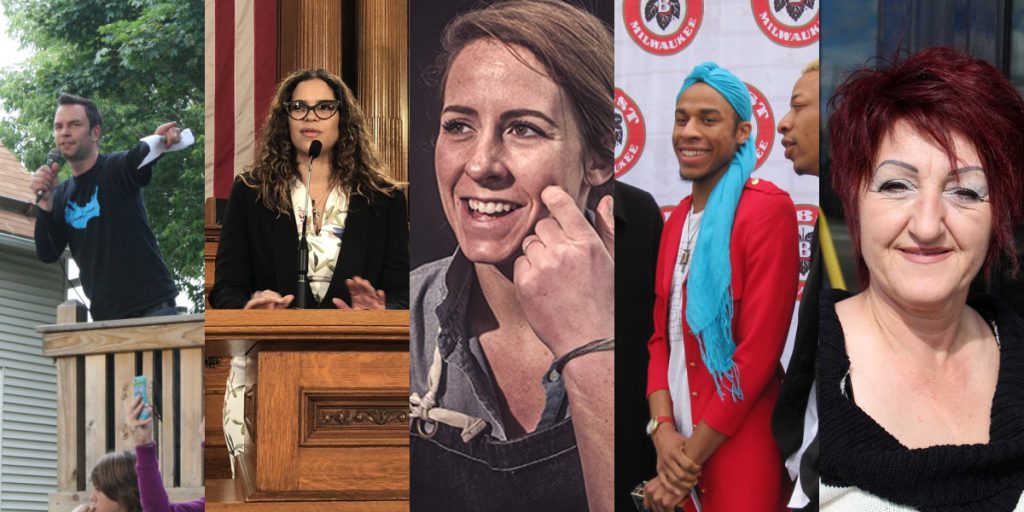 5 Milwaukeeans to be Thankful For 2019

Who is making Milwaukee a better place? Here are five citizens we salute at a time of Thanksgiving:

Some people love their neighborhoods, but the best work to make it a place others can love. Jeremy Prach falls into the latter camp.

The Milwaukee Public Schools teacher co-founded the Riverwest 24, an annual 24-hour celebration of all things Riverwest and bicycle. Is it a race? Sort of. Is it a neighborhood block party? Sort of. The late July event is really designed to celebrate all that is right with Riverwest.

The start-finish line is located right outside Prach’s front door. His home includes a specially-designed front porch that doubles as an elevated podium to make race announcements. To the side is a yard Prach turns into an ice skating rink in the winter.

Prach’s passion for community might be outdone by his passion for motorcycles. He coordinates the annual Flat Out Friday event that will make the jump to Fiserv Forum next year as it continues to grow.

There are thankless jobs and then there is being Milwaukee’s Commissioner of Health.

Jeanette Kowalik, who has held the post since September 2018, has one of the most difficult jobs in the city, yet she does it with a smile on her face.

She inherited a dysfunctional department rife with infighting, vacancies and troubled programs and has managed to change directions.

Are things perfect? Far from it, but Kowalik and her team have managed to get the failing Childhood Lead Poisoning Prevention Program restarted and secured federal funding to perform lead abatement work.

It seems unlikely there will ever be enough money to address the malady of health and wellness issues facing Milwaukee’s most vulnerable citizens, but Kowalik shows up to work every day to lead a team working to make things better.

Caitlin Cullen might not be a household name, but you’ve heard of The Tandem restaurant.

Cullen opened her restaurant in 2016 in the former Wally Schmidt Tavern at 1848 W. Fond du Lac Ave., a building restored by past honoree Juli Kaufmann.

The restaurant, and Cullen, have a social focus as much as a focus on making quality food. From day one she’s deliberately sought to hire residents from the surrounding Lindsay Heights neighborhood, provide on-the-job training and create a pipeline for disadvantaged residents to get coveted downtown service industry jobs.

And while the social mission is laudable, she hasn’t sacrificed when it comes to the quality of the food along the way. The accessible menu is delicious.

Cullen broke her leg this summer, keeping her out of the restaurant for a month and stripping her of the ability to serve as the head chef. A lessor person would have thrown in the towel. Cullen, backed by an emergency crowdfunding campaign, kept right on trucking.

When someone asks for a Milwaukee musician my first answer is invariably Lex Allen.

Allen’s seemingly everywhere. Performing live at festivals, getting airplay on radio stations and writing music used in promotional materials. And wherever you see Allen, you will invariably see a smile on the artist’s face.

That smile radiates throughout Allen’s music and music videos. The latest entry is Allen’s love letter to Milwaukee: “Let Go.” Allen, who also is an icon in Milwaukee’s LGBTQ+ community, can be spotted biking across Milwaukee in the video as a crowd forms around the artist.

May we all find just a shred of the confidence and energy Allen exudes.

You almost certainly don’t know the name Irena Ivic, but you likely do know what she did.

Ivic was the Milwaukee County Transit System driver who, while driving her route in the early morning of December 22nd, spotted a baby all alone on the Interstate 94 Mitchell Street overpass. She stopped the bus to go pick up the child, under a year of age, while a rider provided a coat to the chilled baby.

She’s one of over 10 bus drivers who have rescued individuals spotted in distress along their routes in recent years.

Ivic has been honored by the Common Council, Milwaukee County Board, and Wisconsin State Legislature for her work.

Not all heroes wear capes, but some of them drive you to work.

4 thoughts on “5 Milwaukeeans to Be Thankful For”