Watch out, vehicle is now cruising along city streets across Downtown. 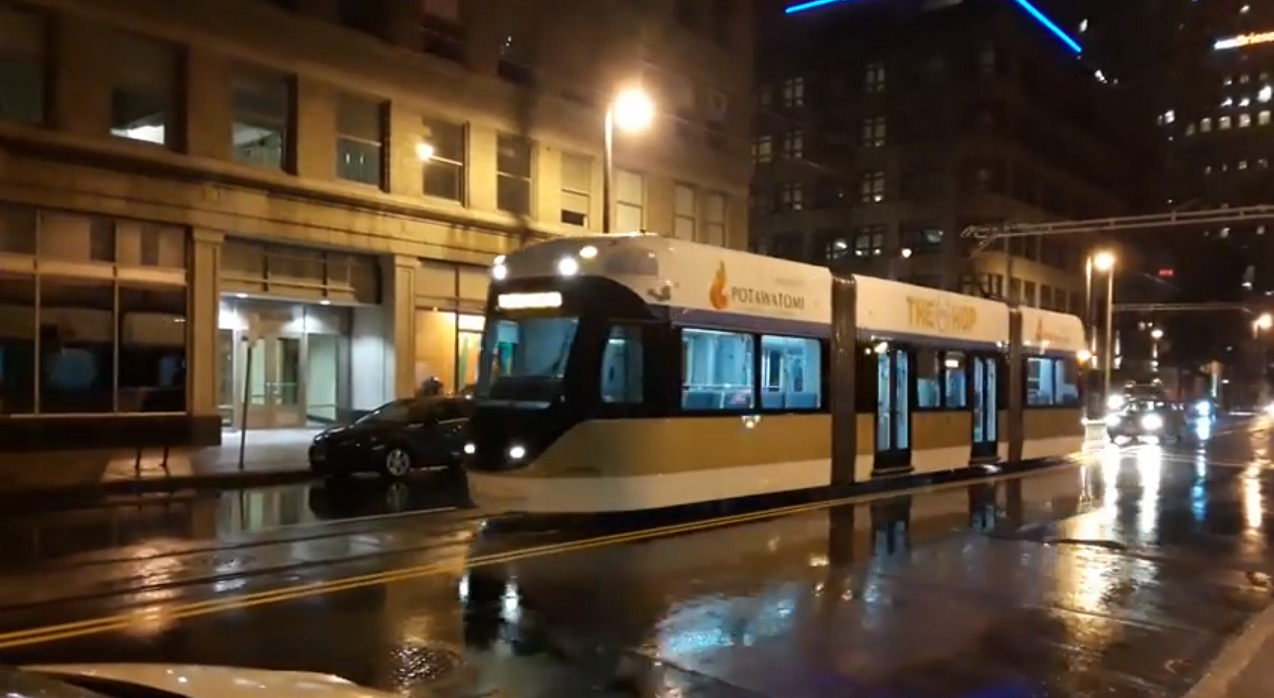 Without fanfare or protest, The Hop made its maiden voyage along much of the route Monday night marking a major milestone for the project.

The vehicle was spotted running north on the 700 block of N. Milwaukee St. around midnight by My Office bartender and world traveler Warren Johnston.

The late-night test was the first time the vehicle has run along the eastern leg of the route through the Historic Third Ward and into downtown’s East Town neighborhood.

The Hop presented by Potawatomi Hotel & Casino, as the Milwaukee Streetcar is now branded, is undergoing testing as project general contractor Kiewit finishes work on the first phase of the route and contracted operator Transdev ramps up operations and maintenance hiring.

Transdev, in partnership with the city, began testing the vehicle on a very short stretch of W. St. Paul Ave. in April after the first vehicle was delivered in late March by Brookville Equipment Corp. The tests, which have now expanded to the entire 2.2-mile first phase, will have vehicles running empty or with load-testing equipment until the system is ready to open to the public in late 2018.

Before the public can ride The Hop, Transdev needs to hire operators, technicians and other system employees, and complete a federally-mandated 1,000 kilometers of testing throughout the route.

The lakefront line expansion is scheduled to begin service in late 2019. Rides for the first year will be underwritten by Potawatomi as part of the casino’s $10-million, 12-year sponsorship deal.

Additional expansion plans are already underway. The Common Council has approved an extension to the Wisconsin Entertainment and Sports Center and The Brewery, contingent on the city receiving a federal grant to cover 50 percent of the estimated $40 million. The city also recently released renderings on how the system would interact with the Walker’s Point and Bronzeville neighborhoods.

This article will be updated as more information on the test becomes available.  Possibly in conjunction with the wider testing of the vehicles, the city has scheduled the launch of a public safety campaign for the system known as Hop Smart for Tuesday.

For more information on the project, see our nearly decade-long coverage of the project linked at the bottom of this article.