About Those Streetcar Stops

Why not a dramatic uniform design for them? Well, because. 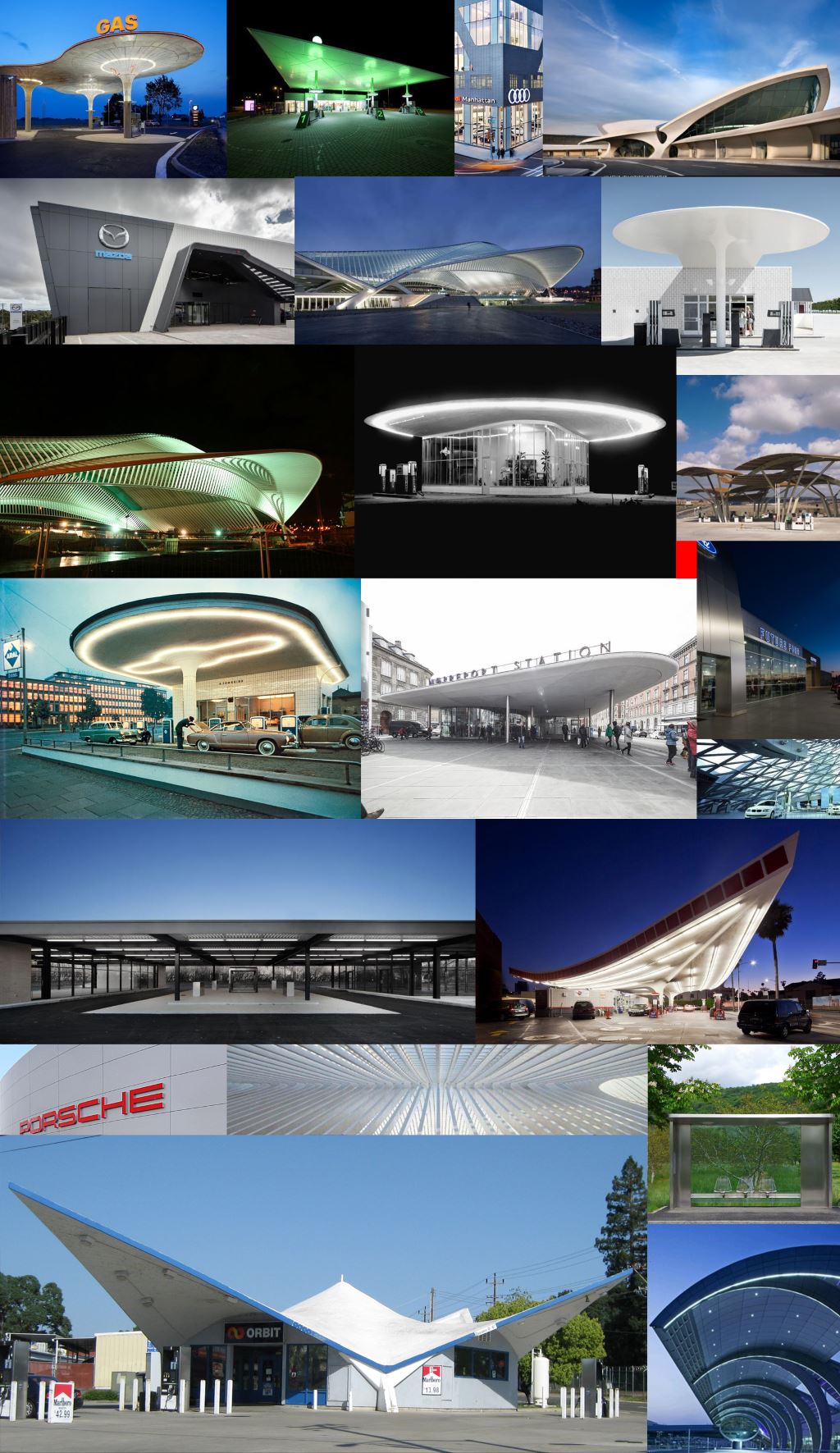 They swirl, zoom, flow, are lighter than air and glow in the dark. Travel portals are buoyant, happy places that sweep through space. Gas stations, train stations, bus stations and airports look forward rather than back. 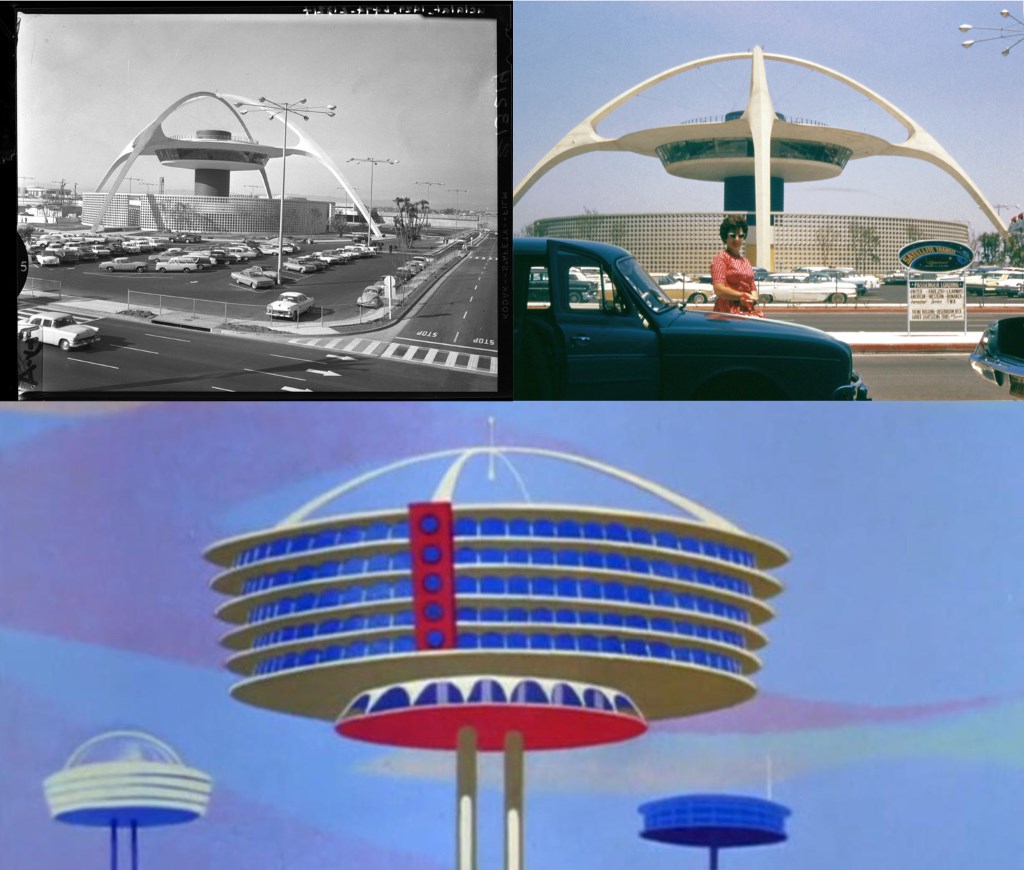 The home town of TV’s “The Jetsons,” the space-age 1962 counterpart to the stone age Flintstones, looked like the “theme building” of the Los Angeles Airport built in 1961. 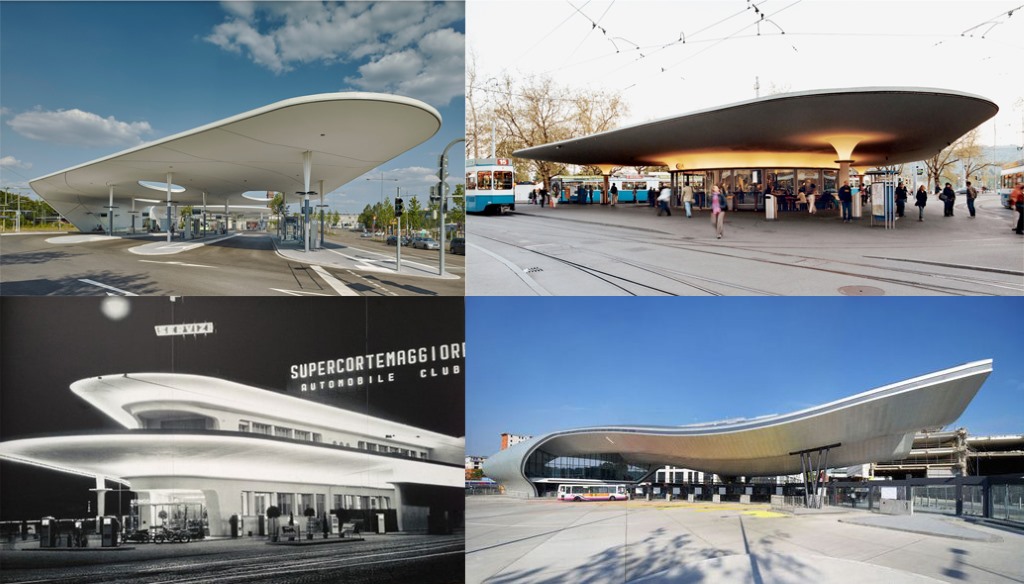 Which brings me to Milwaukee’s plans for our new transportation architecture. Here is Ashley Booth from HNTB, the national infrastructure firm handling the design work for our streetcar stops, making a presentation to at the historic Third Ward Architectural Review Board. 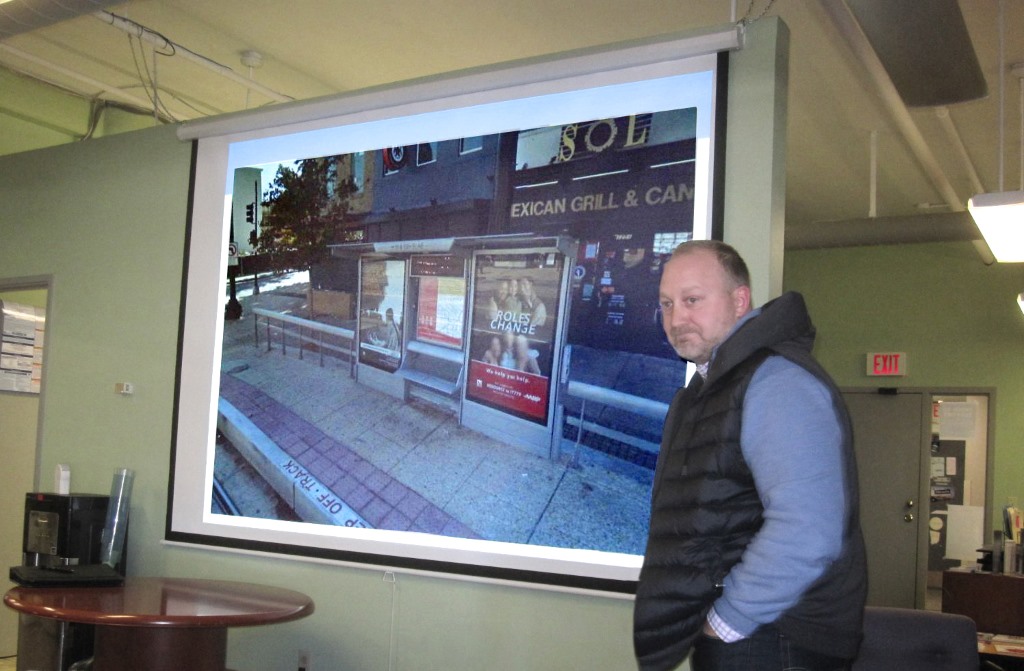 Ald. Bob Bauman, the chairman of that Board, “suggested the shelter could take its design cues from the Public Market itself, with its screens and exposed structural elements, adding that the building and the shelter in this instance could truly be integrated,” as Michael Horne reported for Urban Milwaukee.

The streetcar stations should have “maximum flexibility for the designs,” Bauman said, “which could incorporate neighborhood attributes ….  sponsorships and custom design elements…. the sky’s the limit.”

Following this line of open-ended thinking Alderman Tony Zielinski oversaw the spending of $258,684.37 on a bus stop that was supposed to link Bay View to its industrial past. In this case “maximum flexibility” means no seats at all.

This atrocity offers a couple lessons to consider in designing the streetcar’s stops. First, a design process with no limits is no design process at all.

Second, grabbing symbols from the city’s past, industrial or otherwise, may be a mistake. Transportation systems are usually not nostalgic. There’re about looking forward, going someplace, the future.

This time around it’s Ghassan Korban, the Commissioner of Public Works. According to Bauman, because of the political hostility surrounding rail transit by state Republican leaders, the project was dumped on the Department of Public Works to get it done under the radar. The less design the better. The quicker the better.

Consequently, there is no review by the Department of City Development, as there routinely is for buildings. And no structured design process I have been able to understand other than Korban listening to various stakeholders who are likely to have no expertise or experience in transit architecture and design.

According to Korban, the stops start out as a simple shell for sponsorships and advertisements. The city is going to sell the name of the stations to the highest — or maybe only — bidder. So you could end up with something like the Panda Express or Gruber Law “One call that’s all” downtown stop.

Finally, the design of the streetcar stops will be determined by a lack of money for this, which might keep amateur add-ons at bay. Bauman still thinks he is going to get his doodads reflecting the Third Ward. Korban is not so sure. The Third Ward will need to ante up or some advertiser, say Broken Bat Brewery,  may win the name.

This process, such as it is, leaves no place to ask the question — should a metropolitan light rail system have a uniform metropolitan design? After all,  public transit is about weaving neighborhoods into a greater whole. A strong design could help do that.

But everyone knows the sky is not the limit in Milwaukee. Funding — and political goodwill — is limited. The future will have to wait for the expansion of streetcar system, if that ever happens.

19 thoughts on “In Public: About Those Streetcar Stops”