The Bus Stop That Isn’t

The Bay View “art stop” is neither art nor a good bus stop. For one-tenth the price, the city could have done far better. 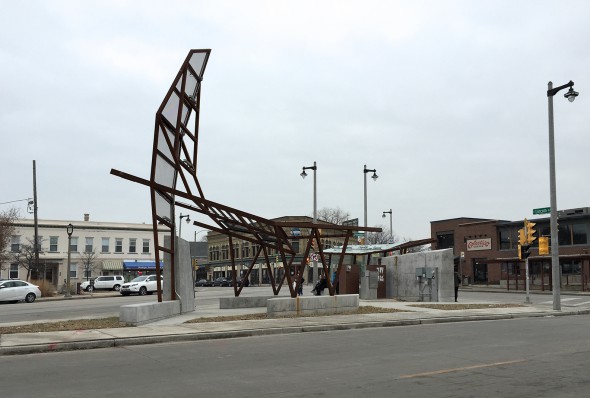 Back in 2011 Ald. Tony Zielinski and business people decided to create an “iconic landmark,” public art that would beautify a “dilapidated” bus stop on the triangle near the intersection of S. Kinnickinnic Ave., E. Lincoln Ave. and S. Howell Ave.

Yes, it was all about beauty. Milwaukee County decided to help fund it, with board chairwoman Marina Dimitrijevic lauding the idea of creating something “beautiful and beneficial to us all.” Paresh Patel, owner of the Bay View Supermarket, donated $5,000 for the artwork, because “I would like to see my Bay View beautiful,” he said. As Zielinski envisioned it, the bus stop would so great it would attract visitors from throughout Southeastern Wisconsin, as well as Illinois, Iowa, Minnesota, Michigan, and Indiana.

The result: an “eco-friendly” art work, by Roman Montoto, called Urban Counter-pose, which few seem to like. It cost more than $200,000.

It’s a lot of money for a bus stop, but cheap by art standards. The Milwaukee Art Museum recently bought an average photograph of an above-average photographer for $400,000.  Jaume Plenza’s fountain in Millennium Park in Chicago cost $16 million.

Putting the word “public” and “beauty” in the same sentence is a tricky business.  Are the orange I-beams of the DiSuvero (at the east end of Wisconsin Ave.) beautiful?  Not many people thought so when it was installed or later after the Calatrava was built when many thought it had to be moved.

But we often agree that something can be more or less beautiful than something else. For example, I don’t think anyone will say Urban Counter-pose is more beautiful than this custom modular bus stop that starts at around $22,000. 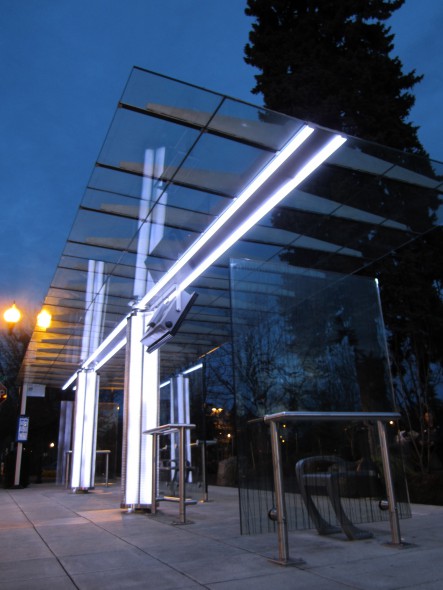 You can find it in Milwaukie, Oregon. It’s made by Brasco, a Michigan company that has sold bus stops to Milwaukee County in the past. It comes in various sizes and configurations and can include concealed flex solar panels, programable LED lighting, and can even be heated.

When Barrett called Urban Counter-pose a “functional” work of art, he must have meant the first meaning of the word — “no frills” or “soulless.”  There are no seats other than the concrete blocks, which no one wants to sit on. It sprawls across a 120 foot triangle, yet its bus shelter is a cramped, 6-by-12 foot, walk-in closet, which no one likes to stand in. 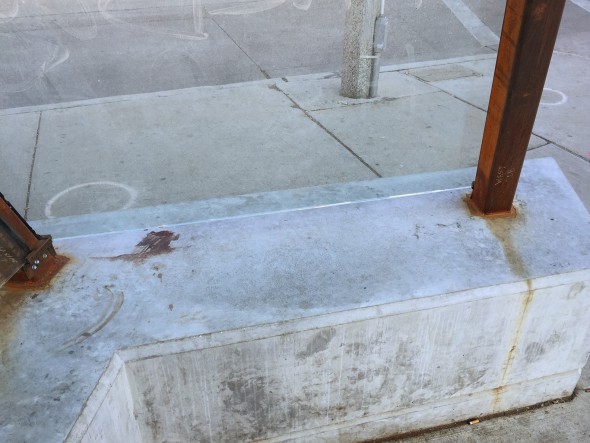 The art-stop does not accommodate humans. Montodo’s makeshift assemblage ignores the contours of our mind and body.  There is nothing to see but a confusion of shapes and materials.  Nothing to touch — no finishes to glide your hand across.  There is no place to be.

The art stop is neither art nor a bus stop. People wait for the bus in a eco-unfriendly disarray of rusty steel, poured concrete and exposed utility boxes. The solar panels and lights are just tacked on. You could say they were an afterthought, if there was any thought to begin with.

Seriously, isn’t this the kind of work that used to get a D in shop class? Or an incomplete? Zielinski told the Bay View Compass he is now working on a plan to cover the utility boxes with colorful murals. 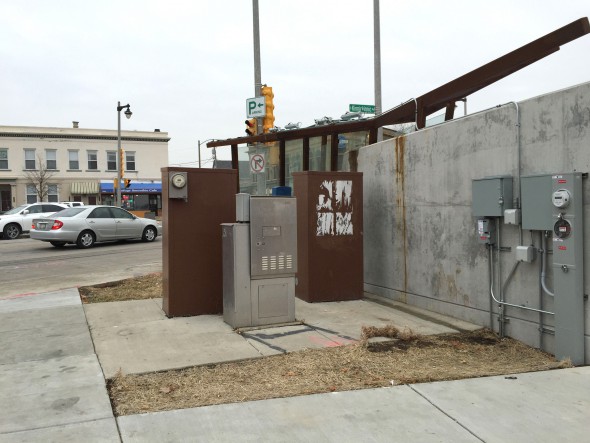 There is no end to this process. Now we need more art to beautify the beautifier. One can imagine the result. 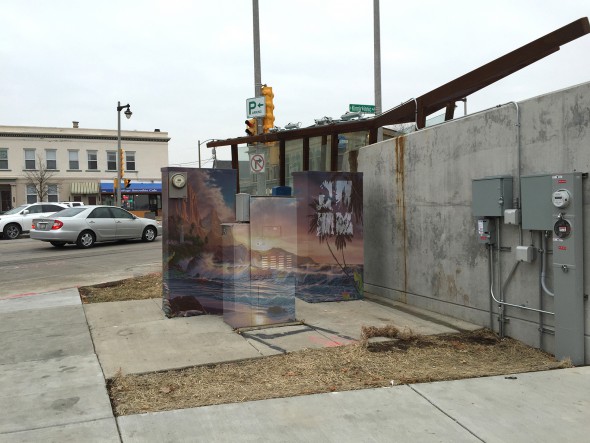 No place in Milwaukee needs this kind of frippery, least of all this prime urban fabric that flows across more angles than anywhere in Milwaukee.

Where E. Lincoln Ave, S. Howell Ave., and S. Allis Street meet up with S Kinnickinnic Avenue is really three intersections rolled into one that forms a dynamic triangle like Times Square in New York.  It’s anchored by Collectivo’s new state-of-the-art coffeeshop-office-factory on the south and Cafe Lulu on the west. There are other coffee shops, lounges, clubs, taverns, a music store, a guitar shop, a smoothie cafe, supermarket, fitness club, barber shop, and comedy club.

This intersection was doing fine, thank you, before this head-on collision between failed architecture and art. This is Montoto’s first bus stop or work of public art.

Art isn’t easy. Santiago Calatrava and Frank Lloyd Wright never figured out how to make a chair one likes to sit in. Museums constantly change their contemporary art because even the best things made today quickly wear out their welcome. But public art is even more difficult; it becomes part of our landscape, has to withstand the elements and not try our patience over time.

Urban Counter-pose is a marketing strategy for a vacuous theory of urban development that married two things that really don’t go together. When used as an additive, art is usually just bad or beside the point. That’s why we don’t make artistic street lights or commission artists to draw the lines on the road. That’s why Tony Zielinski doesn’t drive an art-car to work.

Better to keep it simple. Under ideal circumstances it’s nearly impossible to make great public art. Meanwhile, any day of the week we can shop for a fantastic bus stop at one tenth of the cost. Stop trying to fake us out with signature sculptures that “brand” a place,  and let the buildings do the talking.

See our past coverage of the ArtStop for more photos.

52 thoughts on “In Public: The Bus Stop That Isn’t”