It's a bus stop, art work, and urban island. Grand opening is tonight, but we've already got photos of the new amenity.

Part bus stop, part public art, the ArtStop is the new gateway to Milwaukee’s Bay View neighborhood. The at-times controversial project now occupies the triangular island at the intersections of E. Lincoln, S. Kinnickinnic, and S. Howell avenues. It’s located in the district of Ald. Tony Zielinski, who shepherded the project from the drawing board to completion.

Following a competitive bidding process including 13 applicants, Roman Montoto was awarded the commission. Montoto is a UW-Milwaukee alum and currently serves as an architecture professor at the University of Idaho. Kotze Construction served as the general contractor on the project.

The project features a 32-feet tall steel tower on its north end and a surprisingly warm concrete bench on the south end.

Yesterday, I used  the only logical way to photograph the new gateway, I rode the bus there. The bus stop portion of the ArtStop serves west bound route 53 and south bound route 15 Milwaukee County Transit System buses. Upon my arrival, I was pleased to find people waiting for the bus at both stops, as well as a young couple who just seemed to sitting at the new ArtStop.

The ArtStop was made possible by a gift (of $146,000) to the city by late Department of Public Works employee David Dombrowski, as well as other contributions from Milwaukee County, the Milwaukee Arts Board, Milwaukee Shines, Hub Market owner Paresh Patel and the local business improvement district, #44. The project contract was administered by the BID, which  is chaired by Avalon Theatre owner Lee Barczak.

An unveiling party will be held tonight from 7:30 p.m. to 10:00 p.m., Ald. Zielinski, Mayor Tom Barrett and Milwaukee County Board Chairwoman Marina Dimitrijevic are scheduled to be in attendance. 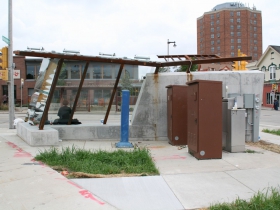 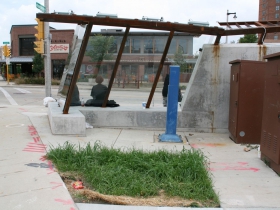 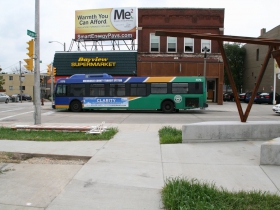 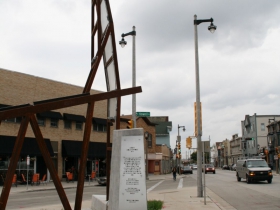 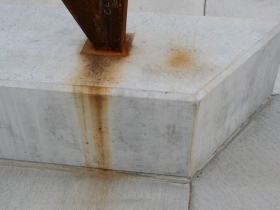 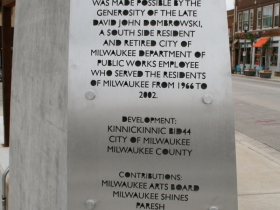