How Will Streetcar Stops Be Designed?

A presentation was made about the streetcar stops planned for the Third Ward at the historic ward’s Architectural Review Board last week. The board heard from Ashley Booth, of HNTB, which is responsible for designing the stops. These, the board was reminded, are designed to raise revenue through advertising, including naming rights, it appears.

Ald. Bob Bauman, the chairman of the board, suggested there was maximum flexibility for the designs of the stations, which could incorporate neighborhood attributes. This would include sponsorships and custom design elements. There is interest in seeing that the stops be immediately identifiable, and conform to technical specifications, but beyond that, Bauman encouraged innovation. So as long as “all mild steel components shall be hot dipped and painted per specification Volume 16 – Architectural,”as the specifications require, the sky’s the limit.

There are numerous limiting factors keeping design whimsy in check, considering the small space available and the intensive amount of infrastructure beneath. All shelters will have two glass panels, and stainless steel cross bars for support. Examples from Atlanta were shown as a prototype for Milwaukee. Another example, from Dallas, served to show what should not be done, since it appears to be little more than a bus shelter.

A Washington, D.C. stop was shown. it includes significant advertising and has a real-time train indicator, as will Milwaukee’s stops. Next up was the Warren Avenue stop of Detroit, which is a sculptural marvel. For $3 million per location, the stops come equipped with infrared heating. Substantial private investment made the project possible. Members were concerned that the project as shown would not age well. A concrete bench would be cold, and will likely chip.

Portland has simple structures, mostly of glass. Milwaukee would use them as a “baseline,” but ours may be a bit fancier. Further instruction came from Seattle, which also has bold shelters. Board member and longtime Department of City Development staffer Greg Patin noted that, “if you have an old building or a new building behind it,” the design would work, since it would not be in competition with the architecture. Merchants like clear glass shelters, since opaque ones might tend to obscure their places of business.

Tucson’s shelters are designed more for shade from sun than wintry breezes. The Tucson design is so stylized that it would be hard to modify it for different environments.

“We are trying to not draw attention, physically, to the shelters themselves. ”

The Milwaukee Public Market stop will flow directly from the building at its southwest corner of E. St. Paul Ave. and N. Water St. It will have ADA access from both its east and west ends. The stop will have full wheelchair accessibility.

The issue of stop names has been raised. Every location will have a formal name, but they have not been identified. “Will the Public Market” be a stop name? Bauman asked. “I can’t say,” he was told. “We have names and we don’t know what they are?” Bauman queried. Most stops will be named for the street, unless there is a significant structure there. “The Public Market qualifies,” Bauman said. In addition to the official names, stops might have sponsored names. Benelux would come to mind in this instance.

System signs would be incorporated into the stops. The vertical signs would be placed so that the operator can pull the vehicle up to the sign, and stop there.

Bauman said he thinks the stops need detailed maps, including bus routes and other attributes. “The more maps the better,” he said. It was also suggested that an application could be developed, since many people use their mobile devices for travel directions.

Bauman suggested the shelter could take its design cues from the Public Market itself, with its screens and exposed structural elements, adding that the building and the shelter in this instance could truly be integrated. Yet would the same strategy work for Benelux, with its buff colored brick? There may be problems with having a variety of shelters, said Matt Jarosz, the ARB Coordinator. Much discussion ensued.

Fabrication of the shelters will take place February through April, with installation to take place in May. 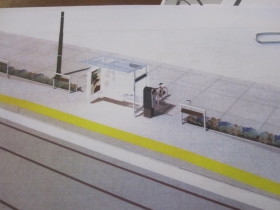 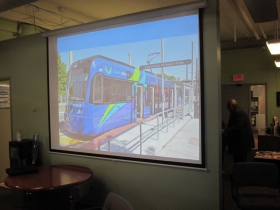 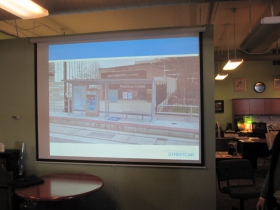 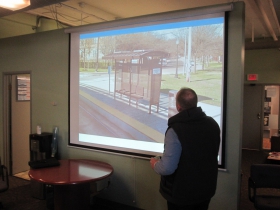 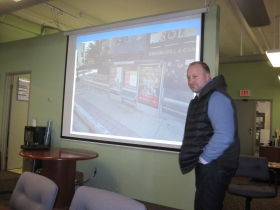 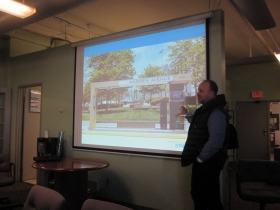 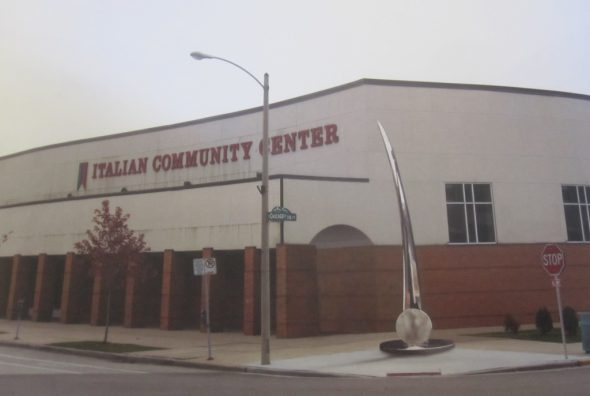 The sculpture shown at the intersection of E. Chicago and N. Jackson streets. Photo by Michael Horne.

Joe Mangiamele, a retired instructor at the UW-Milwaukee School of Architecture and Urban Planning, presented his plans to the board for a sculpture to be located at the northwest corner of the Italian Community Center, 631 E. Chicago St. The sculpture, a polished Brancusian essay reminiscent of sails or elephant tusks, would be located at the intersection of E. Chicago and N. Jackson streets. Mangiamele brought along a maquette of the proposed, 25-foot, stainless-steel sculpture for board members to inspect.

Concern was raised that the image, as shown on a rendering, appeared to encroach on the public way. There were also concerns about it interfering with pedestrian activities, especially during Summerfest. Concern was also raised about the renderings provided by the sculptor, which do not conform with the building’s current state. The sculpture would be located at ground level, and would not be on a plinth, perhaps further rendering it an encumbrance.

Bauman said he would not permit the sculpture to be erected on the public right of way, especially if intended to be permanent.

Patin said “it is a very fine sculpture,” but also suggested a different location for it. Bauman suggested the request for a Certificate of Appropriateness should come from the Italian Community Center itself. Patin advised the artist that the ICC would likely have a survey of its property at hand, so he could tell if it was encumbering the public way. Further concerns were raised that the sculpture might be placed above underground utilities. 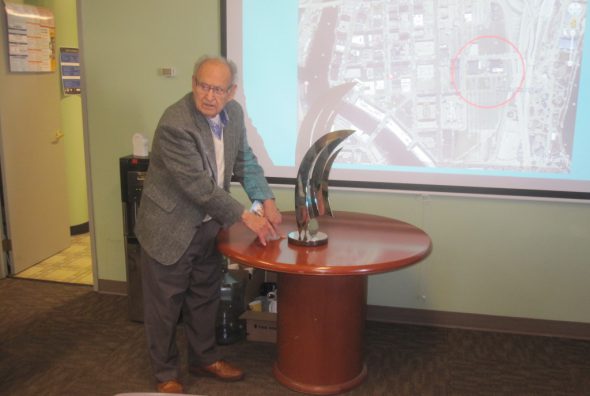 Mangiamele retired at 78 from the university, and spent the next couple of years bumming around. He took to cutting out figures on paper, he said, and things progressed from there. He has established a non-profit foundation.

“How old are you?” asked member Nancy O’Keefe, the former executive director of the Historic Third Ward Business Improvement District.

“In January, I’ll be 95,” Mangiamele announced. “So it’s important this gets done now.”

Bauman said the board is amenable to the project, provided it’s located on private property, in which case the sculpture would not need the board’s approval at all. “You’ll need a building permit, but that’s a relatively straightforward matter,” he said.

Meg Hopkins, the owner of Elements East, has opened her new location at 191 N. Broadway. She presented members of the board with her plans for signage for the design store. The simple arc with lettering met with the members’ approval.

Deb Burton of Poblocki Sign Company introduced signage for The Atelier, 336 N. Milwaukee St., the residential renovation of the former Julien Shade Shop. Signage includes the building’s name and address to be installed on a brick-veneered concrete wall built to accompany an access ramp on the five-story building. A motion was made to approve, and the measure passed unanimously.

8 thoughts on “Plenty of Horne: How Will Streetcar Stops Be Designed?”